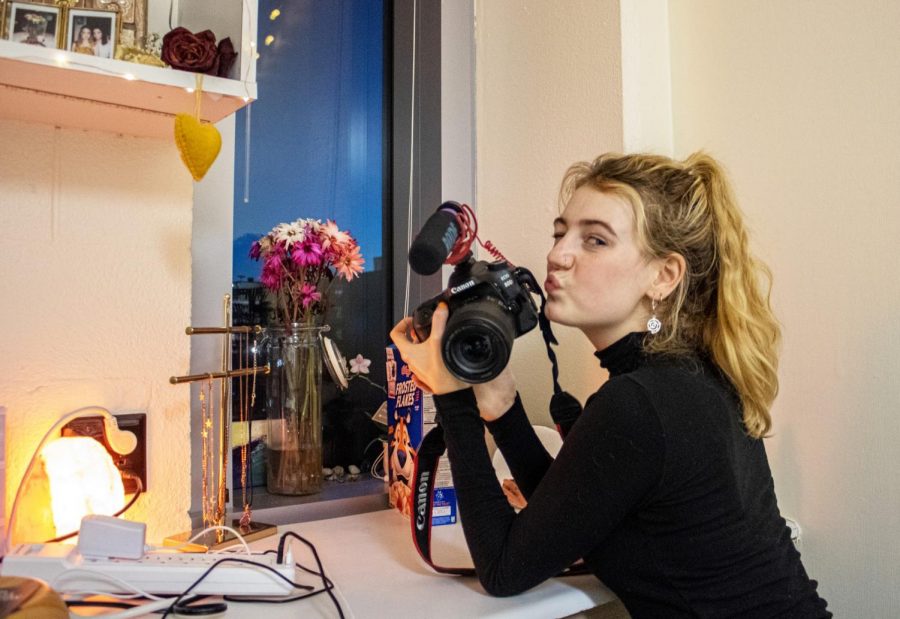 Haley Raines poses in her dorm with the camera she uses to film her Youtube videos. Her channel focuses on documenting how she practices sustainable living being a vegan college student. Photo credit: Caitlyn Reisgen

After COVID-19 made its way into New Orleans, Loyola students were left to abruptly transition to life online, a platform that is all too familiar for mass communication major Haley Raines.

Raines has a Youtube channel with just over 35,000 followers on top of being quarantined at home, in Baton Rouge, Louisiana.

The transition from being at Loyola to staying at home has not been difficult for Raines. She decided to make the best of this time in quarantine and focus on her creativity and pushing herself to learn new skills, including video editing in one of her recent videos titled “Let the Music Run Through You”.

“There’s this one video that I uploaded when quarantine just started and that was one video that wanted to get creative with and work with other software that I had not worked with yet and I’ve had so much time to pick up projects and startups that I’ve been wanting to do and then also work on my videos a bit more,” Raines said.

Aside from being quarantined, it may seem difficult trying to maintain a Youtube channel on top of college. However, Raines said she has found a way to keep the balance.

“I make sure that it is never seen as something I need to do. I do like to post twice a week, but it is not something I make myself do. It’s not a chore. I make sure it’s my passion before anything,” Raines said.

For years, Raines has had a passion for creating videos.

Beginning in the summer of 2009, Raines has been creating videos with a passion for Youtube. Inspired by other YouTubers, at the age of nine years old, she decided to begin her own Youtube journey. Under her mother’s advisory, she went under the pseudonym BB, which was short for Boogie Bear, a nickname her dad had called her and began creating videos with her neighbor, who went under a pseudonym of GG.

“I think we called it the ‘BB and GG Show’ and just started off doing skits and since then it has just kind of progressed into something different over the years,” Raines said.

Over time, her channel has evolved into what it is today, a place where Raines prioritizes making content for herself.

“I used to conform to what other big Youtubers would do and just film the same videos as them, edit the same, and make the same kind of thumbnail, so there was no creativity. It was just me conforming, thinking that was how I was going to gain an audience. Now, I do it for myself and do what I actually enjoy,” Raines said.

Currently, her videos focus on the ideas of sustainable and ethical living through being vegan while incorporating fashion and other topics.

Some of her most popular videos include lifestyle videos where she documents her life as a college student and having a vegan diet. Raines says that she does everything intentionally when it comes to her creative process so that her video is not just for herself, but also for those who watch, too.

“I like to make sure everyone is getting something out of the video and it’s not just mindless videos. I make sure that they are very intentional and they are serving a purpose for others,” Raines said.

Haley continues to evolve her content to challenge herself creatively and says that one of her biggest goals this year is to progress in the editing software she uses, which she has already begun to work on since her time staying at home. She has also discovered a passion for being behind the camera.

“I’ve realized I also like directing videos where I just go off of a vision I’ve had or colors, which is a big thing for me, and pick the mood or tone of the video and go from there,” Raines said.

While her channel’s growth spurt began in 2019, we can expect more great things from Raines in the coming years as she continues to develop and create more content and use her time at home to be productive and a source of positivity.

“I’ve come up with so many cool videos that I’m going to be working on next,” Raines said. It’s a privilege to be able to do this in my house and spend time with this. It gives me something to focus on.”