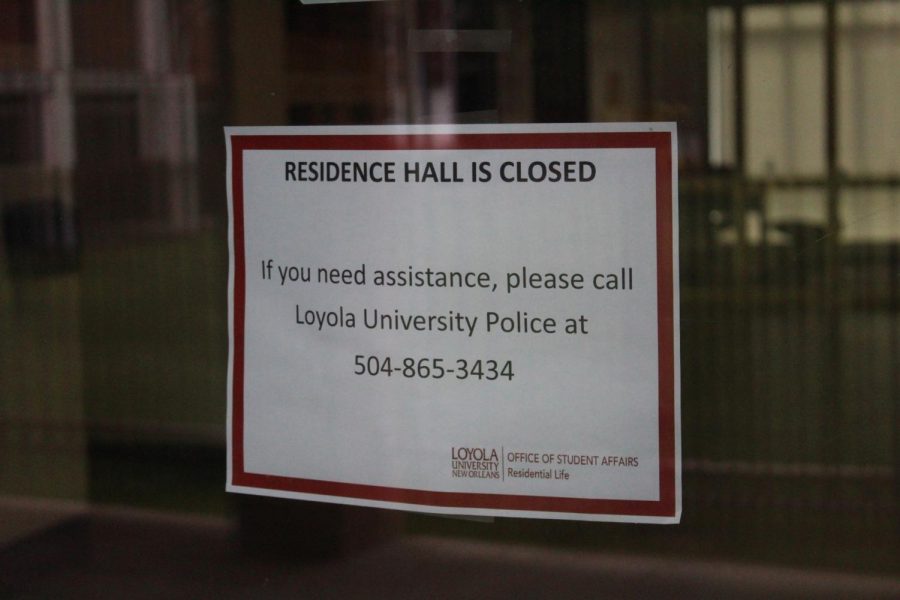 A sign that residence halls are closed due to COVID-19 is posted on the door to Carrollton Hall on May 17, 2020. Upperclassmen were notified in a May 21 email that they would no longer be provided on-campus housing for the fall 2020 semester in order to decrease the density of students on campus due to COVID-19 safety concerns.

Athena Rivera was ready to return to campus in the fall to finish out her final semester at Loyola.

After the spring semester was cut short due to the COVID-19 outbreak, the biology senior wasn’t even sure she would get to see her friends again before she graduated in December, so when Loyola announced plans to return to campus Aug. 24, she was thrilled.

But what she wasn’t expecting was to lose her on-campus housing in Carrollton Hall that she had signed up for weeks ago and thought was guaranteed.

Rivera was one of many students who received a May 21 notice from Amy Boyle director of residential life, notifying them that upperclassmen would no longer have a spot in on-campus housing in order to help reduce density and to “minimize the risk of infection spread” due to COVID-19.

In the email, Boyle said university on-campus housing capacity would be reduced by nearly a third—going from 1,488 beds to 964.

As a result, juniors, seniors, graduate students and law students got the cut, a policy decision that has left many students, including Rivera, reeling.

“Everyone is really upset, everyone that I’ve spoken to who is an upperclassman who was supposed to live on campus,” Rivera said. “That’s our community, that’s our family, and we’re so close to the end and they told us to figure it out.”

Rivera said she had only ever considered on-campus housing because of her December graduation date.

“I was only going to be there one semester, and then I’m done,” Rivera said. “Why would I rent something for a year?”

She said the decision to remove upperclassmen from university housing feels like “getting kicked to the curb.”

In an interview with The Maroon, University President Tania Tetlow said the decision to remove upperclassmen, graduate and law students from housing was a painful, but necessary one.

“We are prioritizing the newest and youngest students, particularly incoming first years who obviously most need housing, many of whom are new to New Orleans and are just beginning to create a community in Loyola,” Tetlow said.

For Emily Stevens, criminology and justice major, the announcement that she would be losing her on-campus housing came as a technicality.

While fall 2020 will be the beginning of her second year at Loyola, Stevens is classified as a junior in the university’s system because of how many credits she has already completed.

“I think my biggest concern is that I’ve never lived completely independently before,” Stevens said. “I’m only 19. Again, this is not how I thought my college career would go. I sort of expected to be in housing for all four years, and I was keeping my quality points up in hopes of that.”

And while she is unhappy that she lost her housing, Stevens said she recognizes that the university is in “a really bad situation.”

“I know there are a lot of people who are very, very upset by this decision, and I would hope to remind people that this is a work in progress thing,” Stevens said. “This is not something they’ve ever had to do before, to my knowledge, so everyone is sort of making it up as they go along.”

Like Stevens, Zarya Curran, who goes by gender neutral pronouns, also lost their housing for their second year of college due to their number of already completed class credits.

The environmental science second-year student said the idea of moving to off-campus living has them concerned about everything from keeping track of rent and utilities, to grocery bills and transportation.

“I do not currently have my driver’s license,” Curran said. “So having an apartment off-campus, it has to be close to campus. I have to be able to walk, or ride a bike, or have the streetcar, which as everyone knows is not the most reliable for getting to class on time. So that’s another aspect of living off-campus that might be kind of tricky.”

In her email to students, Boyle said the university has “a limited number of spaces for students facing extenuating circumstances” that would require them to stay on campus.

Rivera, Stevens and Curran all said they have all filed individual petitions with the Office of Residential Life in the hope that they will be allowed to stay on campus.

Boyle said students who file a petition will hear back about their decisions by June 5 at 5 p.m..

Curran said after filing a petition with the university, they reached out to Boyle personally and were impressed by how quickly they received a response.

“(Boyle) answered it within half an hour, which is incredible given the fact that hundreds of people must be emailing her right now,” Curran said. “So they really are trying to make everything work better for everyone, and I can’t see how they can do any better a job than they’re already doing.”

While she did file a petition to stay on campus, Rivera said she has started looking for off-campus housing in the meantime. She pays her own tuition by working side jobs, so the financial uncertainty of her final semester in college is daunting.

“A couple of my friends and I are looking for a house. Paying for that is going to be a problem, not just for me but for lots of students,” Rivera said. “Moving off campus isn’t only about buying a house, it’s buying a bed, buying furniture.”

Kallan Trombino, finance junior, also said a lack of answers is leaving her unsure of where she stands in terms of the fall semester.

Trombino petitioned to stay in on-campus housing, but also filled out an interest form attached to Boyle’s email about staying in a hotel for the semester.

“We are exploring the option of providing accommodations for students through area hotels and would appreciate your feedback about a hotel option,” Boyle’s email said, asking students to respond by noon, May 22.

Trombino said she responded that she is “moderately interested” in the option to stay in a hotel for the semester as a fall-back, but she was left confused by the lack of details the university provided.

“It’s a nice solution to a hard problem,” Trombino said. “But they didn’t give us any vital information. What hotel? How would we travel to and from? How expensive will it be?”

Trombino said the process of finding off-campus housing has left her feeling defeated.

While she is from Rhode Island, Trombino is spending the summer in Pennsylvania, and is unsure of what to do as many leases in the university area begin June 1.

“It’s hard to find a place this soon, especially since the majority of places are year-long leases and start in nine days,” Trombino said. “If I can’t find housing, move in with a friend, or afford the hotel option or off-campus option, then I’m prepared to leave for a semester.”

Stevens said that despite the uncertainty of the next few months, she is just relieved she will be able to return to campus in the fall at all.

She said “a lot worse could happen” than just needing to rethink her housing for the fall.

“I mean, I already know of several schools who have just decided that school’s going to be online in the fall and they’re not even going to try to manage COVID,” Stevens said. “I would like to remind everyone that Tania Tetlow did respond to the COVID outbreak faster and better than most politicians.”

Rivera echoed the sentiment that returning to Loyola, at the end of the day, is what really matters to her in her final semester.

“I’m so excited to see my friends and finish out strong,” Rivera said. “I’m so close to being done.”