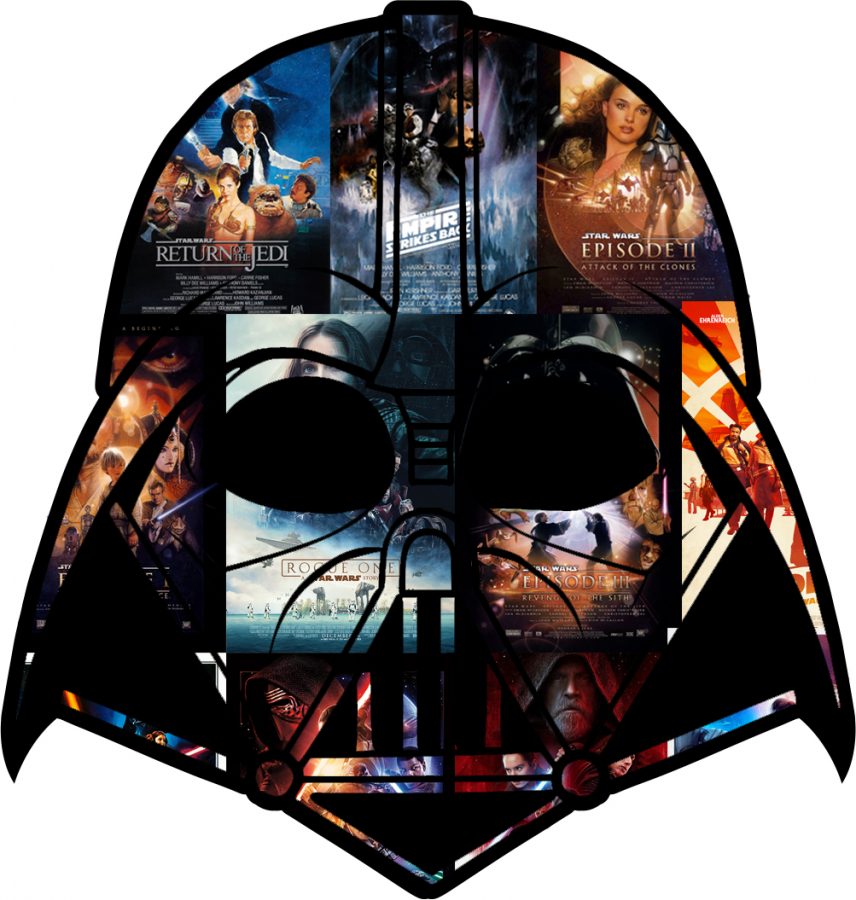 The timeless adventures of humans, aliens, droids, Jedi masters and Sith lords in a galaxy far, far away have been instrumental in lifting the United States out of its post-Vietnam War fatigue. It has also ushered in a new era of pop culture.

Fast forward to the recent May the Fourth, an annual celebration of Star Wars, and Disney Plus has made all Star Wars films (except for “Solo: A Star Wars Story,” which is up on Netflix) available for streaming. The Maroon’s resident film reviewer has chosen to rewatch all the films leading up to the latest one, last year’s “The Rise of Skywalker.” Now he offers a definitive and hopefully objective list of the best of the 11 original, prequel, sequel, and anthology films.

11. Episode I – The Phantom Menace

Made with the advent of computer-generated imagery (CGI) that Lucas deemed sufficient for his vision, the first entry in the Star Wars prequel trilogy showed much promise. Released in 1999, it featured memorable characters and boasted some iconic scenes, usually set to composer John Williams’s mighty score.

However, “The Phantom Menace” falls under the heavy weight of its expectations. Directed by Lucas, it spouted unnecessary exposition and flouted too much CGI for its own good. Either way, the first chapter in the Skywalker saga starts it off with a bumpy start.

10. Episode II – Attack of the Clones

Released in 2002, “Attack of the Clones” is a noted improvement over its predecessor. The boring political machinations that have marred “The Phantom Menace” have subsided. Instead, it placed an increased emphasis on action that may have appeased those hungry for more.

However, it’s still a dud in terms of its rushed plot as well as the usual CGI overuse. Weak dialogue also comes into play, which renders the supposedly budding romance between Jedi apprentice Anakin Skywalker, played by Hayden Christensen, and senator Padmé Amidala, played by Natalie Portman, problematic and bland.

The second anthology film in the Star Wars universe, released in 2018, may be arguably described as needless at best. While it’s always welcome to learn about how beloved smuggler Han Solo, played by Alden Ehrenreich, came to be who he is, the film panders too much to fan service for it to be interesting as a whole. Nevertheless, it boasts some excellent performances, especially from Donald Glover as a young Lando Calrissian, as well as intense action sequences and rich visuals.

8. Episode IX – The Rise of Skywalker

The last chapter in the Skywalker saga has always been regarded as Disney doing damage control for Rian Johnson’s risky maneuvers in previous film “The Last Jedi.” 2019’s “The Rise of Skywalker” banks on nostalgia fare, basically undoing everything Johnson has promised to put out to great effect. By playing it safe to appease the volatile fanbase, the film ends the Star Wars story not with a bang but with a resounding whimper.

Nevertheless, nostalgia is not always a bad thing. Director J.J. Abrams continues to imbue the film with the same formula of exciting action from his previous contribution “The Force Awakens,” one that harkens back to the original trilogy. While not perfect, “The Rise of Skywalker” is certainly ambitious and impressive.

Click here to read The Maroon’s spoiler-free review of “Star Wars: The Rise of Skywalker.”

Click here to read The Maroon’s spoiler review of “Star Wars: The Rise of Skywalker.”

7. Episode III – Revenge of the Sith

The last entry in the prequel series, released in 2005, is also its strongest. While it is still uneven in terms of story and dialogue, it delivers the right set of thrills that culminates in an entertaining and emotional payoff. Its reputation as a prequel may have assured its status as an underrated gem, but “Revenge of the Sith” is a pretty compelling tragedy that deserves a second glance.

6. Rogue One: A Star Wars Story

Directed by Gareth Edwards, the first Star Wars anthology film is a compelling one. The 2016 film features a dark, realistic take on the space adventure story that is more in the spirit of “The Empire Strikes Back.” While its pacing may be less than satisfactory, “Rogue One” is anchored by a solid cast of characters, who help sell the feeling of solidarity for the cause of independence from the Galactic Empire.

5. Episode VI – Return of the Jedi

The main interesting thing about 1983’s “Return of the Jedi” is about Luke Skywalker, played by Mark Hamill, dealing with his identity and later facing off with the evil Emperor, played by Ian McDiarmid. Everything else falls short. From a silly rescue mission in the beginning to the cuddly Ewoks that inexplicably turn the tide in the galactic war, it’s a flawed finish to the original trilogy. While it’s not as great as those that came before it, “Jedi” still packs enough fun and wonder to stand out on its own.

Released a decade after “Revenge of the Sith,” “The Force Awakens” was a much needed shot in the arm after the disappointing prequel trilogy. Director J.J. Abrams enthusiastically breeds new life into the franchise in the form of protagonist Rey, played by Daisy Ridley, who inevitably traverses the same path set forth by Luke in the original trilogy.

Sure, it is derivative of the original trilogy, especially regarding antagonist Kylo Ren, played by Adam Driver, who is basically Darth Vader with the teenage angst. But what matters is that “The Force Awakens” showed the world that Star Wars is cool again.

2017’s “The Last Jedi” brings out the best of the Star Wars story while at the same time taking it to new heights. It may not please some old fans, but “The Empire Strikes Back” did not please people when it first came out either.

Instead of easily going for a rehash of old tropes, director Rian Johnson chooses to utilize classic characters such as Luke and Leia, played by Carrie Fisher, to create a bold and invigorating tale on reclaiming your identity as well as coming to terms with the past. Besides, the gorgeously shot cinematography, borne out of Johnson’s meticulous planning of shot composition, is a bonus.

It was the science fiction film that started it all. An amalgam of “Flash Gordon” theatrics, “2001: A Space Odyssey” special effects wonder, and the infinite possibilities of space, “Star Wars” created a cultural revolution.

Released in 1977, the classic adventure story still earns its place as a formative rite of passage for children today, and it’s not hard to see why. The beauty of the Millennium Falcon, Darth Vader’s menacing persona, awe-inspiring lightsabers, and the countless space battles are quite enough to put a sense of wonder into their minds.

1. Episode V – The Empire Strikes Back

Directed by Irvin Kershner, the 1980 film is one of those rare breed of sequels that are better than their previous incarnations. It boldly introduces a mature tone to the series, which was virtually unheard of in its time. From its compelling story and memorable dialogue to the plot twist heard round the world, “The Empire Strikes Back” provides an everlasting emotional impact.