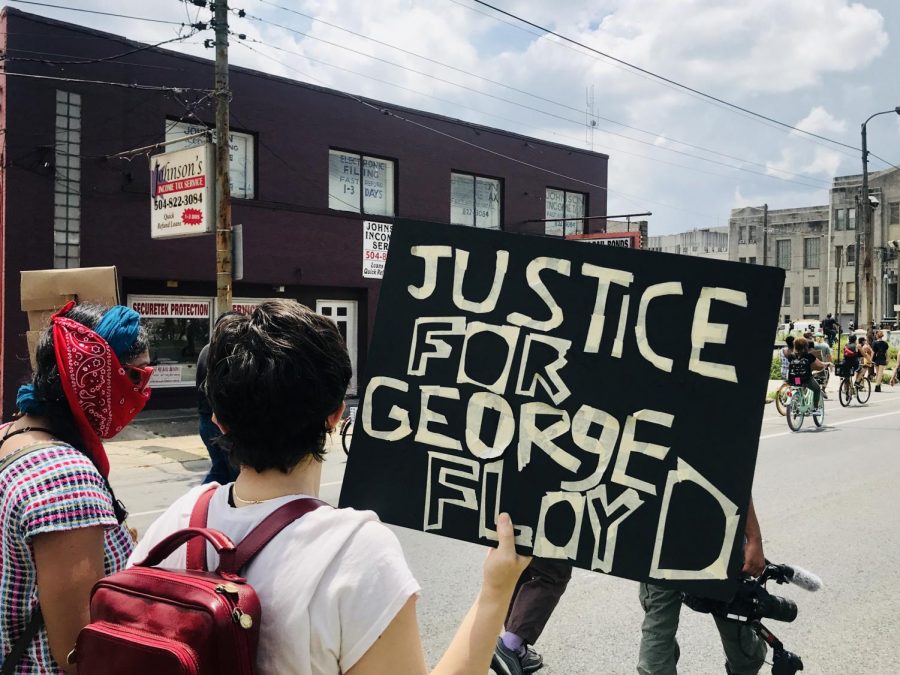 Protestors walk toward NOPD headquarters in Downtown New Orleans on Saturday, May 30 during a protest against the death of George Floyd in Minneapolis Police Custody.

Over the weekend, hundreds of demonstrators peacefully marched side-by-side from Duncan Plaza to New Orleans Police Department Headquarters protesting the death of George Floyd, a black man who died in police custody in Minneapolis on Memorial Day.

Protestors held signs that said “Black Lives Matter” and “Justice for George Floyd,” while police blocked streets to make way for them to pass. As the protestors made their way down Tulane Avenue and headed toward Broad Street, the loud and clear chant of “No justice, no peace. Prosecute the police!” could be heard from blocks away.

The participants of the protest in New Orleans were just hundreds of thousands of protesters nationwide who marched in solidarity with Minneapolis over the weekend.

“I’m out here simply because I have a father that’s Hispanic. I have brothers, and I also have a son, you know, and he’s 10 now, and he shouldn’t have to even deal with this, not in modern-day America,” demonstrator Rashawna Farinas said.

“I just think it’s really important just to be here fighting for this cause and also just to tell people, you know like, our lives matter, we’re not your enemy,” demonstrator Bri Collins said.

Organizers of the event wanted to bring a call to action against racism while honoring George Floyd, Breonna Taylor, a 26-year-old emergency medical worker killed by police inside her home, Ahmaud Arbery, an unarmed black man killed while jogging, and several other people of color who have been killed in recent weeks.

As protestors arrived at their final stop at NOPD Headquarters, they gathered together listening to speeches from community organizers.

Every few sentences during statements, the crowd would clap and yell loudly in agreeance with the speakers’ messages. Siblings Aubrey and Jack Stallard said being part of a protest is a start to creating a just society.

“Huge structural changes will take a long time to do, but we got to start at the ground level and pull the rug out from under,” Aubrey Stallard said.

“What I would like to see is like a more equal society and, like, a society where justice is done to people who do things wrong, including cops and especially cops,” Jack Stallard said.

As a mother and military veteran, Rashawna Farinas said she never thought her son would experience going to a protest. For her, it is worrisome.

“The fact that I’m 31 and I have to bring my son to a protest, that speaks volumes in itself. We’re repeating (history). It is no way in the world this should be happening, and that adds to the amount of anxiety and fear that I already have,” Farinas expressed.

NOPD released a statement on Twitter following the protest, thanking the people who joined in for doing peacefully protesting in a safe and calm manner.

“The New Orleans Police Department appreciates the way demonstrators conducted themselves today while exercising their right to free speech. We are proud of our great city and our community’s commitment to advocate for social justice,” NOPD said.

Farinas wants people of color to be treated equally, fairly and not judged based only on appearance.

“I love everybody, but I know everybody doesn’t love me, simply because of my skin color. That’s not fair,” Farinas expressed.