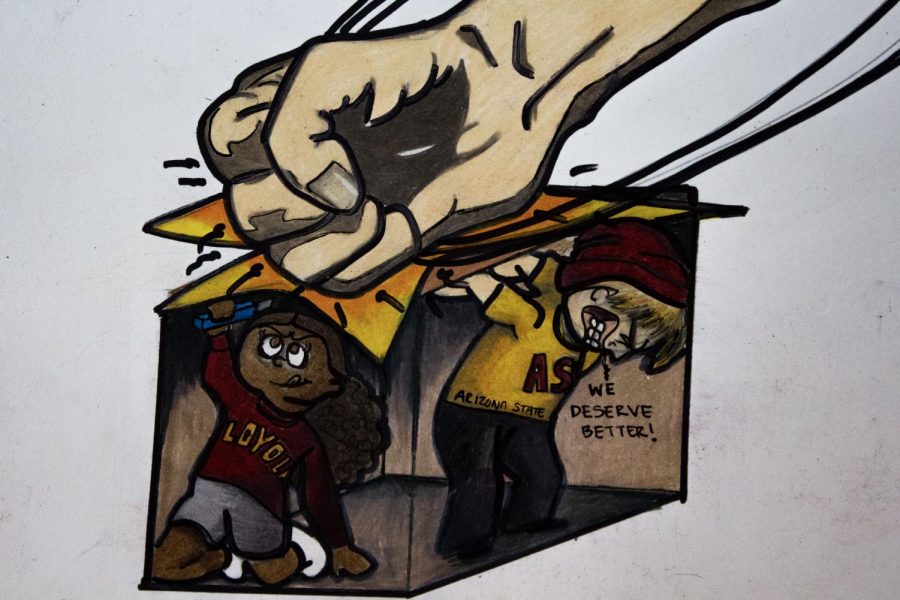 Last week, the Loyola School of Communication and Design was rocked by public accusations of racism and mistreatment raised by students against former director Sonya Duhé, who was slated to become the next journalism dean at Arizona State University. In a tweet that she later deleted, Duhé said, “For the family of George Floyd, the good police officers who keep us safe, my students, faculty and staff. Praying for peace on this #BlackOutTuesday.”

A number of former students responded, most prominently Whitney Woods, A ‘15, who accused Duhé of racism and questioned the sincerity of her message. More than a dozen current and former students came forward in a later investigation by The Maroon saying they experienced what they felt was racism and harassment at the hands of Duhé.

After accusations from multiple Loyola students, past and present, as well as letters of protest from both students and faculty at Arizona State University, ASU rescinded its offer for Duhé to be the next dean of the Walter Cronkite School of Journalism. Following ASU’s revocation, Loyola University President Tania Tetlow apologized on behalf of  Loyola for not doing “a better job of fixing this situation that was, in fact, brought to our attention.” We appreciate Tetlow’s apology, which can be the first step toward a better future. Apologies alone, however, are not enough.

A number of students who attended Loyola between 2011 and 2020 who The Maroon and The State Press at ASU spoke to in their investigations expressed anger and frustration regarding their past experiences with Duhé. If so many students felt this way, and many said they told faculty members, some even filing formal complaints with the university, why did she spend more than a decade at Loyola? Why was she still teaching in the classroom?

It shouldn’t fall on students to combat prejudice and discrimination in their classrooms. ”

It took immense courage and hard work on the part of Loyola alumni to come forward, sparking this conversation and investigations into their claims. It took tenacity and relentlessness from student journalists at both Loyola and ASU to listen to these stories and not be afraid to question the very institutions and universities they are a part of.

And it took incredible empathy and bravery for the faculty and students of the Cronkite School at ASU to start raising their concerns about Duhé’s alleged conduct to the university’s leadership, setting a standard for what they believe students deserve in the classroom.

While we commend all those who helped to bring about this change, it shouldn’t fall on students to combat prejudice and discrimination in their classrooms. It shouldn’t take Twitter threads referencing alleged conduct years after the fact and student media investigations for students to feel heard.

Universities have a responsibility to ensure that their faculty are fair and respectful, that students feel they belong in the classrooms they are in. Because they do, and no faculty member or classmate should ever make them question that.

As soon as Loyola alumni shared their experiences and other students at both schools spoke out in support of them, ASU took these concerns seriously, but it’s not clear that Loyola ever did. Students told The Maroon they brought up concerns about Duhé to other faculty members over the course of years. So why was she still the director, the face of the school? Why was she still teaching classes, working as a supposed mentor for students?

The professors who know us, who we learn from, and who many of us at The Maroon see more than our own parents, stood and watched students suffer through what students said was discrimination.

When students like Nia Porter and Whitney Woods tried to speak out about their experiences in The Maroon and through other outlets, they said it was professors who discouraged them. Students said that when Duhé was repeatedly accused of racist behavior, they felt that the predominantly white mass communication faculty tried to explain away her conduct.

Professors need to understand that the student experience is not for them to judge. They need to listen to students and acknowledge their concerns. They need to recognize that denying that another professor has exhibited racism only contributes further to the problem.

It has become clear that this problem is bigger than just Sonya Duhé.

Her behavior was inexcusable, and Loyola should have done much more about it, much sooner. The fact that Loyola did not stop her is a problem in and of itself. Arizona State University rescinded Duhé’s job offer almost immediately in light of students’ concerns, whereas Loyola allowed her to continue at her job for years in the midst of repeated formal and informal complaints.

Because human resources files are sealed, we can’t know exactly what Loyola did to address Duhé’s conduct.  Certainly, we can’t say that Arizona State is perfect. The fact that they were set to hire Duhé perhaps hints at flaws in their hiring process. But at least they rescinded that offer once students spoke out. The disparity between the two schools’ responses speaks for itself.

No professor should teach students to become one kind of person, one kind of global citizen. It is not only destructive, but dangerous for a professor to provide a singular view of who students are allowed to be and become, especially in journalism.”

No professor should teach students to become one kind of person, one kind of global citizen. It is not only destructive, but dangerous for a professor to provide a singular view of who students are allowed to be and become, especially in journalism. For the stories of the world to be told, we need them to be told in different ways by different people. Many of us came to Loyola because we did not want to fit into the prescribed box we felt the world was pushing us into.

We deserve professors who help us escape that box, not try to trap us inside it.

Again, this problem is bigger than one person. The fact that a faculty member was allowed to remain in the classroom despite repeated complaints of mistreatment by students speaks to a systemic problem. It shows that there are flaws in Loyola’s system for handling human resources complaints. It shows that our school needs to take on a more active role in combating bigotry on campus. It shows that a university that so publicly touts the intimacy of its classrooms and diversity of its students needs to listen and act upon student concerns.

Some alumnus’ grievances were directed toward The Maroon. They said that Loyola’s student media did not do enough to call attention to Duhé’s behavior. They’re right. In many cases, though, that wasn’t for lack of trying. Nia Porter was editor-in-chief of The Maroon, and Whitney Woods was a member of the editorial board back in 2015. They, and other students, said they tried to report on complaints about Duhé and the experiences of students of color, but they said they were discouraged not only by Duhé, but also by other members of the faculty.

However, that’s not an excuse for our lack of coverage over the years.

It’s difficult for us to write about this—most of us were not yet Loyola students when the majority of the reported incidents took place, so there’s a lot we don’t know about The Maroon’s response.

Some of us know the faculty, as well as Duhé intimately, and have our own personal experiences we are working to grapple with.

But we do know this: with support from the editorial board, The Maroon can publish anything without approval from any faculty, and even in spite of faculty objections. Going forward, we need to ensure that The Maroon, as an organization, stands behind students and enables them to be heard even when Loyola may not want them to be.

Although The Maroon is officially a part of the university, we are student-run, student-produced and student-managed.

We aim not only to relay news about the university to the students, but also to relay news about the students to the university, and beyond. We are here to amplify unheard voices and tell untold truths. We promise to work harder to improve our newsroom’s diversity and representation in respect to the student body and to seek out the stories that matter most, especially when the institution of Loyola may not want us to.

We are here to amplify unheard voices and tell untold truths. We promise to work harder to improve our newsroom’s diversity and representation in respect to the student body and to seek out the stories that matter most, especially when the institution of Loyola may not want us to.”

The diverse population of Loyola should be represented both in our newsroom and in our coverage. Our motto is “For a greater Loyola.” That means a Loyola that is more equitable, more just and more sensitive to students’ experiences. That also means a newsroom at The Maroon that reflects these values, and is unafraid to question the university when it may not appear to live up to them. We hope we have shown that over the past week.

We stand in solidarity with all the students who feel they have experienced discrimination at Loyola.

Our Black students and other students of color who have been victims of racism on our campus deserve justice. We at The Maroon promise to work our hardest to play an active role in calling attention to injustice at Loyola.

The events of the past few weeks have made one thing perfectly clear: Loyola students deserve better. The apology that President Tania Tetlow issued a few days ago is only a beginning.

To our fellow students, we know that many social justice issues remain at Loyola. Please continue to speak out and call attention to them. We promise to work our hardest at amplifying your voices and speaking on your behalf.

With the revocation of Duhé’s new job offer, we are seeing the kind of change that can be made when students speak out. Unfortunately, it came much too late for students who were caused a great deal of pain by their experiences here. But we have to believe that by continuing to advocate, we can continue to improve our school.

We can’t let up now. Keep fighting for change. Loyola can’t become a better place without you.