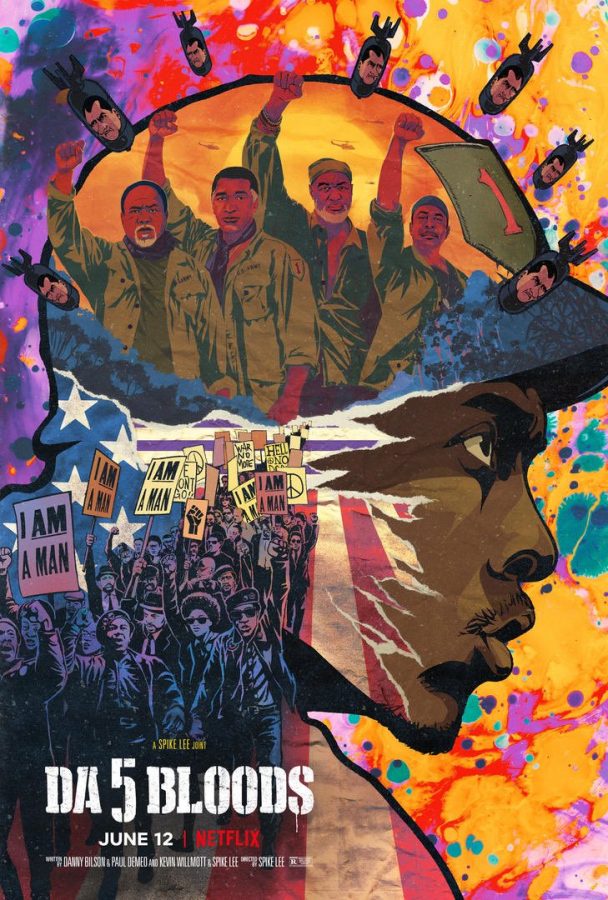 Spike Lee’s latest joint “Da 5 Bloods” continues the wildly energetic streak the prolific filmmaker has recently carved for himself. The “BlacKkKlansman” helmer has pulled out all the stops in creating a brilliant and timely tale, this time set in the shadows of Vietnam War.

The Netflix film follows four African-American Vietnam War veterans, played by Delroy Lindo, Clarke Peters, Norm Jeffers and Isiah Whitmore, Jr. They travel to present-day Vietnam to find the remains of their squad leader Stormin’ Norman, played by Chadwick Boseman. Unofficially, they are also in search of a stash of gold that they had uncovered from a prior skirmish with the Viet Cong and buried years ago.

However, the journey is not without obstacles, both external and internal, as the “Bloods” come to terms with their demons to bring their fellow brother home.

The stacked cast of characters is phenomenal in their own right. Aside from the main characters, there’s Jean Reno as shady French businessman Desroche. With “Da 5 Bloods” owing itself to Vietnam War classic “Apocalypse Now,” one can be forgiven for his admittedly terrifying bulk figure reminding them of Marlon Brando’s iconic character.

However, as the film goes on, it becomes apparent that he can also stand in for the current American president (nicknamed as “Fake Bone Spurs” in a news footage). This bizarre, subverting observation is driven close to home by the film’s climax, showing a typical instance of Lee showing his political flair.

There are more noteworthy characters in the film, played by stars such as Jonathan Majors and Mélanie Thierry to “BlacKkKlansman” alums Paul Walter Hauser and Jäsper Pääkkönen. Yes, I am saving the best for last, as Delroy Lindo brings in an unforgettable performance as Paul, the volatile, MAGA hat-wearing leader of the surviving Bloods.

Much like Martin Sheen in “Apocalypse Now” before him, he manages to paint a picture of a complex character tormented by demons past and present. Lee uses Lindo as a mouthpiece for the sins of America, especially in a rambling, magnificent monologue that’s one of his trademarks. If the actor does not get nominated for Best Actor in next year’s Academy Awards, one will be really surprised.

Lee wears his cinematic influences on his sleeve with “Da 5 Bloods.” Aside from the usual “Apocalypse Now” connections (further hammered home by the Bloods attending a house party that themes the 1979 Francis Ford Coppola film), it also takes its inspiration from the 1948 film “The Treasure of Sierra Madre.”

For example, Lindo stands in for Humphrey Bogart’s character, even though unlike John Huston’s parable of greed, they already know where the stash of gold is located. There may be the usual criticism of Lee milking his influences for what it’s worth, but when Lee takes the “Sierra Madre” template and weaves a wonderfully complex tapestry recalling “Apocalypse Now,” you know you’re in for a ride.

The director provides a scathing critique of whitewashing in Vietnam War movies such as “Rambo,” “Missing in Action,” and “The Green Berets.” One character even remarks about how Hollywood went back to Vietnam to win the war for America.

More importantly, Lee makes sure to point out that while actors like Chuck Norris and Sylvester Stallone were doing America’s bidding, the soldiers of color are conveniently being left out (in fact, they comprised about 32% of troops fighting in Vietnam).

Lee also makes sure to drop morsels of information on unsung black heroes throughout history, such as Boston Massacre figure Crispus Attucks and Milton Olive III, the first African-American to receive the Medal of Honor for jumping on a grenade to save his platoon in Vietnam.

As it goes without saying, it’s not a Spike Lee joint if it does not tackle racism in any way.

By extension, “Da 5 Bloods” is more than a heist film. It also tackles the demons of conflicts past in regard to African Americans, as they deal with being sent to Vietnam to fight an enemy who probably did not know any better about being roped into a fight against political ideologues.

As the civil rights movement raged on back home, these black folks are expected to fight and die for America, a country that constantly bleeds them dry with discrimination.

Lee tackles the toxic legacy of Vietnam as he takes it into the present day in a timely fashion. He bookends the film with historical footage of Muhammad Ali and Martin Luther King, Jr. speaking out against the war, and the Black Lives Matter movement also gets their much-needed spotlight towards the end.

While it may come off as jarring at times, cinematographer Newton Thomas Sigel handles the tonal changes well, creating imagery that’s strikingly beautiful and horrific all the same.

Frequent Lee collaborator Terence Blanchard imbues the film’s score with the needed atmosphere of each scene. Marvin Gaye also dominates the proceedings, especially with the chilling acapella rendition of “What’s Going On” guaranteed to stay with the viewer for a long time.

With “Da 5 Bloods,” Lee has created a violent, scrappy, and overall exciting film. And yet it’s more than a run of the mill, “Three Kings”-style heist tale, as he also provides a two parts provocative and inspiring case for black greatness that’s much needed today in these turbulent times.

As Langston Hughes says in the film’s end: “America never was America to me, and yet I swear this oath — America will be!”