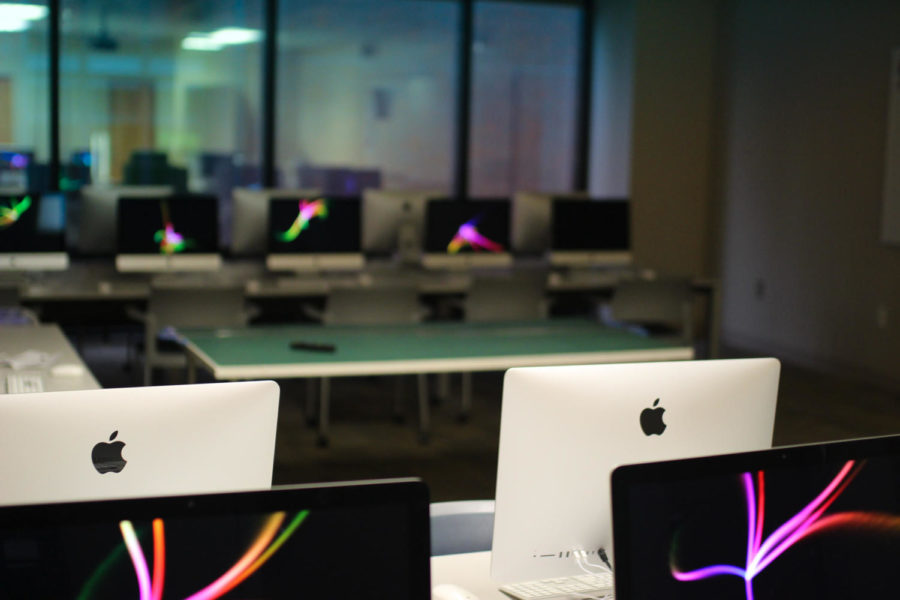 Computers sit in an empty lab in the Loyola School of Communication and design in 2019. Loyola's decision to open campus but hold many online and hybrid classes in the fall has sparked calls by students for the university to reduce tuition.

Although campus will be re-opening in August, Loyola has adjusted classes so that most instruction is partially or entirely online in order to follow social distancing guidelines, a decision that has left many students frustrated.

The decision to re-open campus but move a significant portion of instruction online has left many students frustrated about paying regular tuition.

René Tobolski, psychology and criminology sophomore, was one of more than 350 people who signed a Change.org petition started by students to lower tuition fees.

“I understand that times are tough for everyone and the school needs money, but, especially for students like myself that are paying for school on their own or students whose parents are paying but are in tough financial situations, it runs the risk of us not being able to complete our education or being stretched so thin trying to pay it off that we cannot reach our full potential,” Tobolski said.

The petition was started by Kallan Trombino, finance junior, after she calculated the cost per-credit of Loyola tuition. She said that she was paying $959 per credit hour and that four of her six classes had moved online for fall 2020. Trombino said that Loyola online classes cost approximately $450 a credit hour in previous years.

Caitlyn Morrison, political science senior, signed Trombino’s petition. Morrison was ousted from on-campus housing for the fall after Loyola paired down the number of on-campus residents in order to follow social distancing rules, a decision that has left Morrison hyper-aware of her finances.

Morrison’s schedule has her taking one online class, three “HyFlex” classes and one in-person class that will hold tests online. She is a Loyola Scholarship recipient, meaning she will get a refund for her lost housing. But that will not reach her bank account until two weeks after the semester starts, leaving her questioning how, and why, she will come up with two months of rent. She acknowledged that there are people who are in far worse situations, which is why she signed the petition to lower tuition.

“A lot of us are taking serious financial burdens being forced off of campus. I’ll have to come up with two months rent, since they won’t issue my refund until two weeks into the semester, for the promise of in-person classes only to have class once a week,” Morrison said.

MacGregor did note that in-person classes will be offered with a priority being given to classes that require larger spaces to maintain social distance as well as smaller graduate classes. Most student schedules as they currently appear on LORA are final, but MacGregor encouraged students to talk to their advisors to see if they can change their schedule to better their learning experience.

In a statement to The Maroon regarding the petition, university officials said that standard tuition is necessary for the university to keep running, as well as pay for the added expenses that COVID-19 has caused. The university said it is projected to lose income from displacing upperclassmen from campus housing and it also faces increased cleaning and technology costs.

University officials also emphasized that the majority of Loyola students receive financial aid that reduces the cost of traditional tuition.

“What students pay on average (which is much, much less than the full tuition rate) is already equivalent to what a traditional online program would charge,” the statement explained.

But in addition to tuition, students are worried about what life will look like on campus.

“I’m a student that needs to be in a classroom to learn. I get distracted easily and it’s hard to stay on track with online learning,” Tobolski said. “It is also annoying because you cannot create those connections with the other students and professors, so it’s harder to get help.”

Trombino said she is also concerned about the logistics of a largely online education.

“I don’t have WiFi and I don’t know if I can afford WiFi. I know a bunch of other people that I’ve talked to also don’t have it. What is the library situation going to be? Will I be able to rent WiFi from the school or receive WiFi from them like they were doing for students back in March?” Trombino said.

MacGregor said that the university is aware of digital inequalities and is working on improving on-campus WiFi as well as accessibility to library resources. An email sent by Interim Provost Maria Calzada on June 23, 2020 included a link to a survey asking students about their technology needs. MacGregor encouraged students to fill out this survey so that Loyola has a better idea of how to help students.

“People joke about the quality of Loyola’s WiFi all the time, I think that’s an open secret. So we’re also having conversations and making sure with IT that we’re working on enhancing the capacity of our WiFi network to support more people being online at the same time,” MacGregor said.

Brailey Penny, public relations senior, signed Trombino’s petition and said she is struggling to grapple with what classes and life will look like in August.

“I get why classes are moved online. The health and safety of Loyola as a community is more important than having a ‘senior experience’ but it also feels like it sucks all around,” she said.

Penny recommended the university host another town hall to address some of the larger concerns that students have in order to allow for more communication between the students and the school.

And Penny isn’t alone in her emotions.

“My entire life has been uprooted for the foreseeable future,” Morrison said.

MacGregor said the university is trying to address as many questions as possible about the return to campus.

“We very much care about our students and like to be able to solve their problems and we can’t always do that if we don’t know who specifically has a problem. We’re here to listen and we’re here to support,” MacGregor said.

EDIT: Since writing this article, Caitlyn Morrison has confirmed that her in-person class will be a “HyFlex.”