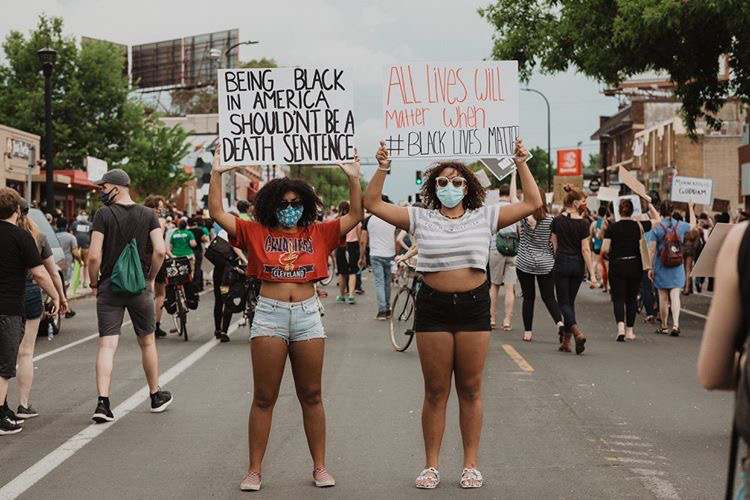 Sunderland Shands, Political science and spanish sophomore, protests on the streets of Minneapolis following the death of George Floyd. Floyd died May 25 after Minneapolis Police Officer Derek Chauvin kneeled on his neck for eight minutes and 46 seconds, an action that has prompted nationwide protests against police brutality. Photo courtesy of Sunderland Shands.

The narrative of police brutality was nothing new to Sunderland Shands, political science and Spanish sophomore. On Jul. 6, 2016, when Shands was in high school in Minneapolis, Philando Castile was shot and killed by a police officer at a traffic stop a few miles outside the city.

Shands wanted to protest, but she said her parents wouldn’t let her because she was “too young” and they believed it would’ve been too dangerous.

But on May 26, nearly four years later, Shands took to the streets to protest this time, against the death of another unarmed Black man. Minneapolis Police Department Officer Derek Chauvin kneeled on George Floyd’s neck for 8 minutes and 46 seconds before Floyd was unresponsive.

“Immediately, my sister and I, we hit the streets, we didn’t even tell our parents,” Shands said. “I stand for this so deeply, I need to go out there and use my voice.”

In the days following initial protests, Shands would go to the city after work, join activists on the streets and support her community. She described the attitudes of the protests as compassionate yet angry, but not violently.

“Everyone is there for the same reason,” Shands said. “They want Black lives to be valued and equally as important as every other life.”

While some protests, according to Shands, turned into rioting and looting, she said the community was quick to respond.

“Minneapolis had come together to donate food, supplies and other basic necessities for those who have been indirectly affected by the rioting,” Shands said. “My friends and I spent many hours on several different occasions volunteering at these sites to collect and organize the materials for others. There was thousands of items donated that we actually ran out of space for it all.”

Members of the Minneapolis City Council have also announced plans to dismantle the department following a civil rights investigation that was launched following Floyd’s death.

Shands attributed the city governments action following Floyd’s death to the efforts of the community.

“If it wasn’t for the peaceful protests and rioting, then Minneapolis council members would not have come together,” she said.

In addition to protesting and volunteering, Shands has also been most recently active on social media and hosted a Zoom forum on racial injustice to talk about Black experiences in education, healthcare, society, as well as interactions with law enforcement.

Sadie Edmonston, A’20, has also been using social media as a means to raise awareness for the Black Lives Matter movement.

“I felt a call for action,” Edmonston said. “I try and share as much information as possible. I try to get people to read things, to watch shows that would further educate them about systemic racism and ultimately their own form of racism.”

In Edmonston’s home of New Orleans, she said protests have largely been peaceful but defined the New Orleans Police Department’s encounter with protestors as “performative.”

At her first protest, she said NOPD was kneeling with protestors and claiming they stand in solidarity with them. The next night, she said, they used force.

“I did see people pulling off to the side and puking, people were hollering for milk or medics, people were very helpful with each other,” Edmonston said. “People started to panic, but we were able to calm the situation and get everyone off there as safely as possible.”

The next night, she said the crowd returned to normal, and she cited her belief that the police presence caused the protestors’ angst.

In New Orleans, protests have been sporadic but have slowed down since the beginning of the month.

“Everybody’s worried about well we’re in this big group, you move from uptown to downtown, downtown to uptown. You don’t know what’s going to happen at the next curve, you don’t know out past curfew, how the police are going to react, there have been really bad instances,’ Vasquez said.

Before June 8, when New York City Mayor Bill de Blasio ended the curfew, protestors out past 8 p.m. in Manhattan and Brooklyn were treated with pepper spray, force or arrests by the New York Police Department.

This, along with noticing an increase of people searching for a buddy to go protest with prompted Vasquez to found the New York Buddy System— a system that sorts protestors into groups of 10 to 15 people based on the time and location they are planning for.

“I just really wish that people wouldn’t go alone so that they could be safe because if you’re alone and say you get arrested or something happens and you have nobody, nobody is going to know where you are,” Vasquez said.

Vasquez has been using her personal Instagram account to inform people of upcoming protests, receive messages from protestors, medical providers and people interested in providing bail funds and then sort them into groups.

Since starting the Buddy System, Vasquez’s network has served protestors in all five boroughs of New York, and said she still has groups that are contacting each other to go to protests throughout the week. For this reason, she said her job as a mediator has been slowing down as protests across the city continue.

Carrie Elizabeth Smith, a finance and marketing junior, who has also been involved with the Buddy System in her hometown of Atlanta, has noticed the positive impacts of the system.

“Being in this Buddy System, you literally have to look out for another person and make sure that they are okay and that they stay safe, and so I’ve seen a lot of friendships form, a lot of people really taking their activism to the next level,” Smith said.

During the recent protests, Smith has also co-founded Protest Kit Atl— a kit that provides legal and tangible resources. Smith included the American Civil Liberties Union “know your rights,” a pamphlet that informs citizens of their rights if they are detained by police, a contact list if arrested, basic first aid and snacks for local protestors.

Smith’s overall involvement with the movement she said has to do with her family’s history with police brutality.

“My family’s history is literally the result of police brutality and a life that was lost as a result,” Smith said. “Something that many people don’t know about my grandfather is that his father was actually killed by police officers when he was 17, so he never even got to meet my grandfather when he was born.”

When Smith was in sixth grade, she realized that people could be killed on account of their race after learning about the killing of Trayvon Martin, an unarmed Black teenager who was fatally shot walking home from a gas station in Florida in 2012.

“Police brutality is something that has also been a part of my life, something that I’ve always been aware of and have made the effort to prevent it from happening or at least have more people aware about and really understand the severity of it, Smith said.

Despite the recent killing of Rayshard Brooks, a Black man who was killed in a Wendy’s parking lot after an officer found him sleeping in his car, Smith said conversations regarding race relations in Atlanta have been difficult.

“It’s a very difficult conversation because Atlanta has been one of the cities that have been at the front of Civil Rights Movements, especially with Dr. King being here and a lot of people are made aware of the fact that Atlanta isn’t as accepting as we perceived it to be,” Smith said.

Attending recent protests, which have included majorette dancers and marching bands and has been joyous despite unfortunate circumstances, Smith said, has been inspiring.

“It kind of shows just how strong Black people are. They can find a way to find light and be happy and find ways to smile even in the darkest of times,” she said.

With citywide protests continuing, Smith’s work as a Buddy System organizer and for Protest Kit Atl she said has kept her busy.

As nationwide protests are nearing a month long and social media feeds are returning to normal, many activists echoed that the movement has not ended.

“It doesn’t stop here and these protests need to keep going. This movement started years ago but I think the change is going to come now,” Vasquez said.

According to Shands, the movement for racial justice is long-term. She cited the Civil Rights Movement and the Montgomery Bus Boycott lasted over a year.

“This is not going to be a sprint, this is going to be a marathon. But with how everything is going right now, we’re definitely going to get there,” Shands said.

Amidst recent civil unrest and heightened anxiety, Smith said she believes the situation “will get better” and encouraged activists to tune into their mental health.

“If you have to take the backseat or you have to step away for a moment it’s going to be okay,” Smith said. “Know that it’s not your sole responsibility to solve this issue, it’s something that is going to take a collective effort from everyone.”