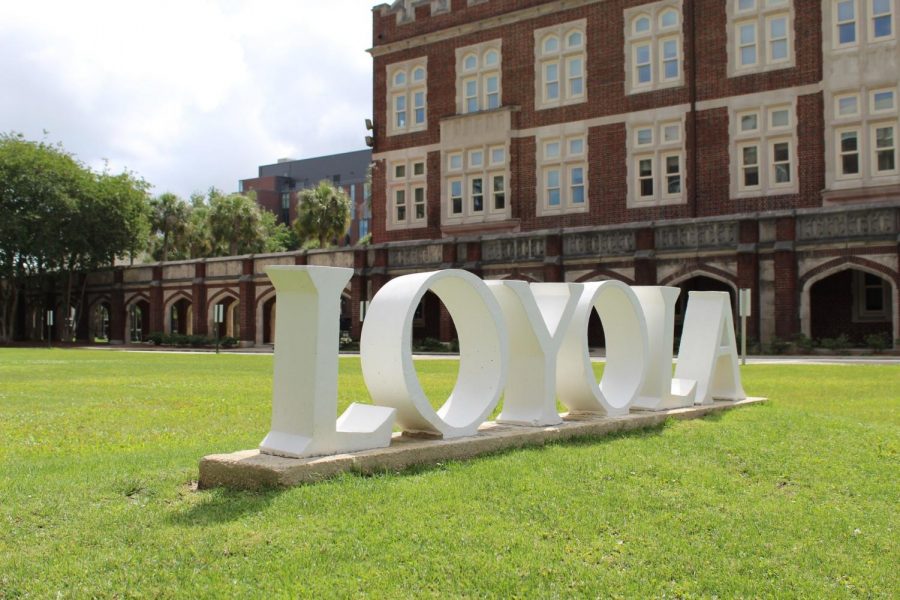 The Loyola sign sits outside Marquette Hall on May 17, 2020. Loyola is seeking a coordinator of multicultural affairs to oversee the soon-to-open multicultural center.

Disclaimer: As of July 14, the Trump administration has reversed course and rescinded the guidelines that would have prevented international students from taking a full schedule of online classes this fall while remaining in the U.S.

Changes to international students’ visa eligibility from U.S. Immigration and Customs Enforcement have stoked concern among some students, but the university is taking steps to quell those worries.

ICE announced earlier this month that F-1 international students enrolled in exclusively online classes with no in-person components will be deported unless they transfer to a school with in-person classes or return to their home country voluntarily. International students who take a medical leave of absence are explicitly protected from these “immigration consequences,” according to the July 6 press release on ICE’s website.

As a university that will offer a hybrid model between online and in-person instruction, Loyola sent out emails to international students and their advisors to let them know that the university was aware of the changes. Loyola departments have convened to follow updates from ICE and interpret how the updated guidelines apply to Loyola’s students, according to Mariette Thomas, director of the Center for International Education.

Current Student and Exchange Visitor Program guidelines state that F-1 status students are not allowed to take a “full course of study” online, which translates to 12 or more credit hours with certain exceptions. If there were to be a sudden shift to entirely online teaching before Thanksgiving break, Loyola’s F-1 status international students risk deportation from the country.

While Loyola administrators wait for further details from the U.S. Department of Homeland Security, Thomas said Loyola will help international students adjust their fall schedules from now through the coming months to comply with the changes.

This is all happening as students like Jackie France, a history and political science junior, pledge support for their international student peers at Loyola.

France posted a petition to the university on July 8, two days after the fallout from the July 6 announcement. France’s petition, at the time of publication, has drawn in nearly 700 signatures. It calls on Loyola to guarantee international students eligibility to remain in the U.S. through offering and implementing zero and/or one credit courses with an in-person component.

France said the recent changes by ICE hit close to home, motivating her to start the petition.

“I was not born in the U.S. I have dual citizenship with the U.S. and Brazil, and I have cousins who have considered going to school in the United States, and it’s already a really difficult process,” France said.

France, for inspiration, nodded toward groups who have vocally opposed the latest guidelines include private and public colleges and universities, several of which have since filed lawsuits against the federal government.

The Association of Jesuit Colleges and Universities, which includes Loyola University New Orleans, has also banded together to unanimously call on the Student Exchange and Visitor Program and ICE to reverse the changes.

France said the changes in ICE policy are an obstacle, when she said international students already face so many.

“Applying, getting it approved, it’s typically very expensive for international students to attend university in the United States. And, on top of the cultural adjustment, I didn’t think it was fair to remove them from the country because of something that is completely out of their control, like a pandemic,” France said.

Biology senior Yeyoung Cho, who came from South Korea to study at Loyola, said that New Orleans is more than just a college town to her. Experiencing the culture, music, architecture and food the city has to offer is what has made her experience abroad memorable.

Having spent the past five years at school in the U.S., Cho said she was initially shocked and frustrated by the ICE policy changes.

“I renewed my F-1 visa in May which I think was one of the best decisions I have ever made. I was so ready to go back to NOLA and start my semester with this new visa, but it almost got destroyed,” Cho said.

Although she said she feels she could handle the HyFlex model classes she is taking, Cho is concerned about peers living under challenging circumstances.

According to Thomas, Loyola began addressing the issue internally before France posted her petition two days later and before the entire student body received an email from Provost Tanuja Singh two days after that. Regardless, Thomas said she is grateful for the petition to have gained traction.

“It’s more important now than ever when we have [federal] guidance that’s issued that really can make students not feel very welcome here,” Thomas said. “It’s wonderful to hear on my own campus so many people saying that international students are a valued part of the university community.”

Editor’s note: This story has been updated as of 5:53 p.m. CST to reflect the accuracy of a “full course of study,” to clarify that the risk of deportation was not yet law and to correct the name of Loyola’s acting provost.