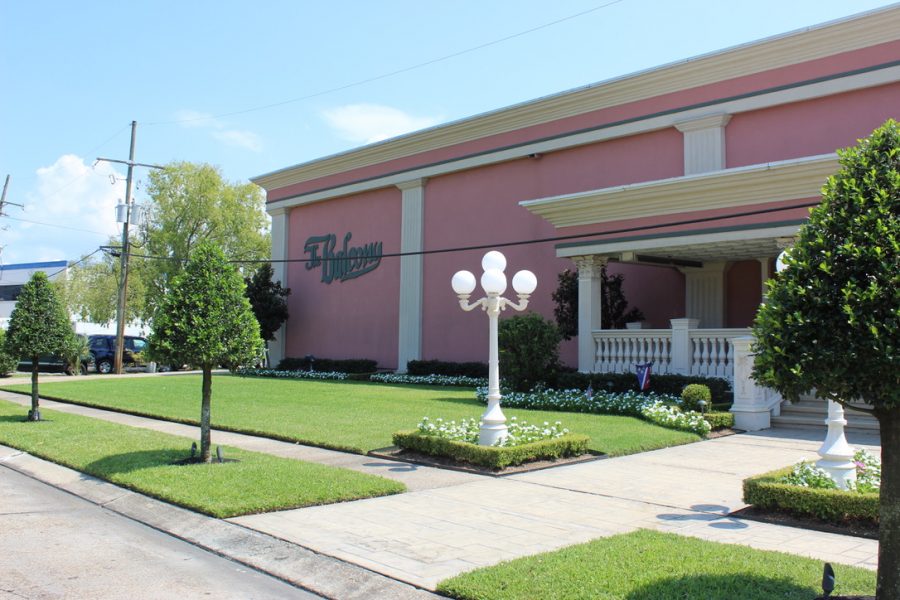 The Balcony Ballroom in Metairie sits under a sunny sky on Aug. 18. The venue hosted an event that violated state and city COVID-19 guidelines July 18 and is one of many venues that wedding vendors say have put attendees and service workers at risk during events. Photo credit: Gabriella Killett

Over the span of an hour and a half, about 200 guests, including Jefferson Parish detail officers, walked into The Balcony Ballroom the evening of July 18.

While many people who entered the establishment were masked, the bridal party who exited the limo bus after arriving from the ceremony was not, and people crowded around to be let inside the venue.

Wedding vendors in the New Orleans area said this scene, and many like it, have made them feel uncomfortable, facing the dilemma of either working in what they feel are unsafe conditions or potentially losing their livelihoods.

Venues that have been questioned by vendors, such as English Turn Golf and Country Club and The Balcony Ballroom, counter that they’re following city and state COVID-19 guidelines — but reports by the State Fire Marshal challenge some of those claims.

For its part, English Turn Golf and Country Club hosted a July 3 event that raised concerns among vendors. However, Jessica King, director of sales, said the event did not violate the 100 person event cap that was mandated at the time by the governor.

The Balcony Ballroom also said they were following the rules, despite concerns and complaints from vendors. The venue has a restaurant license, according to a spokesperson from the State Fire Marshal’s office, which allows the business to fall under different regulations than event venues.

Still, the State Fire Marshal’s office found the Balcony Ballroom to be in violation of rules for restaurants at least once, specifically, at the event on July 18.

Upon complaints about the event, State Fire Marshal deputies visited the venue July 30 to make staff aware of the rules for businesses with a restaurant license.

Earlier in July, vendors reported The Balcony Ballroom as not enforcing the use of face masks and allowing dancing, both risks that violate city and state guidelines for businesses with a restaurant license, according to the State Fire Marshal’s office.

The State Fire Marshal’s Office said the venue had an inaccurate view about what rules had to be followed at the time of the violations and the business was not penalized.

Wedding planner Brittani Adams-Perret said she is upset that some venues and brides have decided to host events outside of regulations.

Adams-Perret said New Orleans is at a greater risk for financial burden because the industry is made up of “mom and pop shops,” rather than corporations.

“We’ve worked our entire lives to be where we’re at, and for people to not understand and not have that empathy for us is just mind-blowing,” Adams-Perret said.

Another vendor, who chose to remain anonymous to keep their business safe, said they are concerned for the safety and the health of those attending events that violate regulations.

“You’re put in this terrible position where you’re thinking ‘Is this bride’s grandmother going to be there? What if I’m carrying (the virus)? What if I show up and they check by temperature and they say ‘oh, you have a fever’’? I have to leave, and that vendor is not there for her wedding day,” the vendor said.

Gernhauser is the owner and principal planner of three wedding planning companies, one of which she created upon seeing that COVID-19 would limit her ability to host large weddings.

While planners such as Gernhauser navigate through making small weddings trendy, Matthew Diaz, owner and principal photographer of Mateo and Company, said his revenue loss comes from his reliance on destination weddings.

Diaz said 65% of his clients are from out of state, which has led to cancellations and postponements due to the added element of travel.

Diaz said he hopes events outside of regulations will stop not only for safety reasons, but also so that the reputation of the industry may stay intact.

“Do we really want to lose in the future because of a reputation of how the city has handled it?” Diaz said.