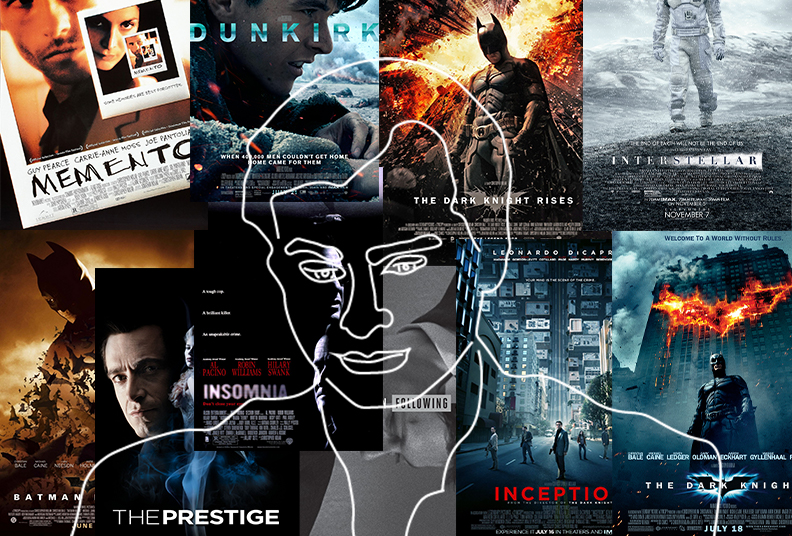 In a world with few commercially successful film makers, Christopher Nolan is a fascinating rarity. His unique brand of filmmaking tackles themes such as time, identity and subjective reality. He also prominently features practical effects and real filming locations in an age of CGI and cost-cutting. Nolan’s big-budget blockbusters are a consistent testament to his rare ability to transcend the critical and the commercial in equal measure.

To commemorate the long-delayed theatrical release of Nolan’s latest epic “Tenet” in the United States this week, The Maroon’s resident film reviewer, Ver Lumod, ranks 10 of his prior films according to story, themes and overall cinematic experience.

Released in 1998, “Following” is an understated yet impressive debut from Nolan. Made on a shoestring budget of $6,000 and shot in 15-minute intervals over the course of a year, the film centers on a struggling writer (played by Jeremy Theobald) who gets himself tangled into a dangerous scheme.

“Following” showcases Nolan’s penchant for nonlinear storytelling in prototypical form, which he would later refine to greater success with his next film “Memento.” The film may be minor league compared to the filmmaker’s latest blockbusters, but it comes highly recommended for its unique genre thrills.

To this day, the jury is still out on the case for the 2014 space epic’s cinematic greatness. On one hand, “Interstellar” is mesmerizing in terms of technical quality. It features some of the most memorable scenes set in outer space since Stanley Kubrick’s “2001: A Space Odyssey.”

On the other hand, the film loses its cinematic luster by its tendency to be too upfront in terms of exposition. Its reliance on melodrama can also end up being hokey.

Either way, it’s not too hard to see Nolan’s admittedly unique take on the imposing space genre as one rooted in human emotion. At the end of the day, “Interstellar” is an undeniable ode to the power of love, which transcends everything mankind has ever set out to do.

The final installment in the Dark Knight trilogy is another mixed bag. Released in 2011, “The Dark Knight Rises” focuses on a new villain that is definitely not the Joker in the form of the physically imposing Bane, played by Tom Hardy. The film has its finest moments, from Bane’s midair hijacking at the beginning, but it is ultimately a letdown.

The film tries to juggle multiple characters with diminishing results. One gets the sense that the studio isn’t quite ready to let go of this potentially profitable franchise, as the film basically teases numerous spin-offs. Its potentially ambitious themes of social strife, inspired by Charles Dickens’s novel “A Tale of Two Cities,” fall flat as well. Either way, it’s fair to say that “The Dark Knight Rises” is a visually spectacular yet needlessly complex finale to Nolan’s Batman trilogy.

Nolan’s first foray into the superhero genre is a smart, stylish and exciting one. 2005’s “Batman Begins” has a unique take on the superhero origin story, one in which a spoiled brat hungry for revenge becomes the caped crusader of Gotham City. Yes, Bruce Wayne’s well-earned transition into the Batman is something that subsequent superhero films have tried (and mostly failed) to emulate.

The film boasts a stack of brilliant performances, from Christian Bale as Wayne and Liam Neeson as his mentor Ducard to Michael Caine as his butler Alfred Pennyworth and Morgan Freeman as his Wayne Enterprises, Inc. colleague Lucius Fox. “Batman Begins” introduced a darker, mature edge in the superhero genre, one that would be refined later on by Marvel and DC in their own varying ways.

Nolan directs the 2002 remake of the 1997 Scandinavian crime thriller from director Erik Skjoldbjærg. “Insomnia” is nearly a shot for shot reinterpretation with stylistic choices that scream “Hollywood.”

But Nolan improves on the original’s understated tale of guilt by turning into a truly engrossing psychological drama. “Insomnia” thrives on the strength of its performances, especially from Al Pacino as detective Will Dormer and Robin Williams in a chilling against type role as his antagonist Walter Finch.

The 2010 thriller is multi-layered, thought-provoking and entertaining. Nolan expands on the theme of dreams and subjective reality and boasts some of the most iconic set pieces and scenes in recent film history. “Inception” possesses stellar performances from an ensemble cast, from Leonardo DiCaprio and Joseph Gordon-Levitt to Tom Hardy and Ellen Page.

However, one of the film’s main missteps is how it expounds exposition after exposition. While it is meant to orient the uninitiated, it can be a little too much after a while. Still, when Nolan hands this original and alluring of an experience, one has to sit back and watch it all unfold in a spectacular way.

Nolan creates another mind-blowing film in 2006’s “The Prestige.” The film centers on two rival magicians, played by Hugh Jackman and Christian Bale, who attempt to outwit each other with increasingly fatal results.

The film is truly a dazzling and engrossing affair, especially when Nolan structures it as one big magic trick. Seriously, nothing more needs to be said.

With the 2017 war film “Dunkirk,” Nolan has asserted his place as one of the best filmmakers working today. It centers on the evacuation of the British military from the town of Dunkirk, overrun by German forces in 1940.

What distinguishes the film from other contemporary war movies is that it conjures up the prevailing sensation of fear. There’s no exposition this time, only the sights and sounds that these brave soldiers are feeling. In effect, the audience is there to share their unflinching hope that they will make it out alive.

“Dunkirk” makes use of Nolan’s penchant for nonlinear storytelling, in this case, a triptych structure, and he manages to weave them altogether effectively. After the exposition-heavy and subsequently disappointing previous films he made, “Dunkirk” is quite a breath of fresh air.

Nolan’s second feature, released in 2000, brought him international recognition. “Memento” is an intense and mind-boggling puzzle, bizarrely structured like never before. It could all have been a dud, though, without Guy Pearce’s brilliant performance as Leonard Shelby, a guy with short-term memory loss.

While presenting the audiences with an accurate depiction of Shelby’s condition, the film also works as a discourse on the unreliability of memory among others. It’s no surprise that with “Memento,” a cinematic master has been unleashed.

“The Dark Knight” is a triumph of cinematic filmmaking in general, as well as the superhero genre in particular. Released in 2008, the film sees Nolan creating more than just a formulaic superhero caper. He has also made a dark, complex and compelling crime tale that centers on what happens when an unstoppable force meets with an immovable object.

Undeniably, the star of the show is Heath Ledger, who presents an unparalleled performance as the Joker, a relentless counterpart to Christian Bale’s Batman. The film also boasts some iconic set pieces, scenes and characters, and is an escalating roller-coaster all around. “The Dark Knight” is truly one of Nolan’s finest works, and one that cemented his place as a cinematic visionary in modern times.