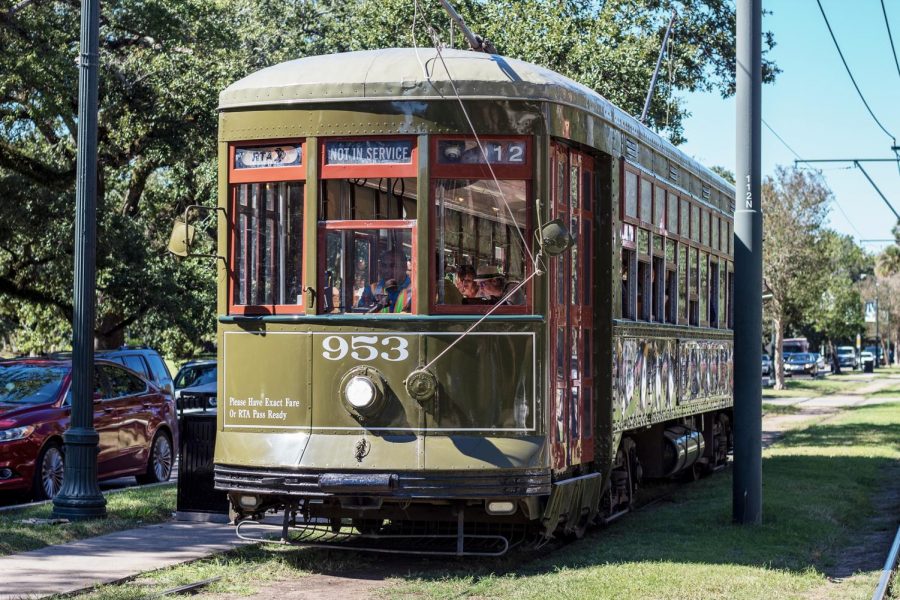 A streetcar heads down St. Charles Ave on October 23, 2019. The streetcar is a common symbol of New Orleans. Photo credit: Cristian Orellana

Let’s say you’re standing by a trolley track, or in New Orleanian fashion, a streetcar track. There are five people tied to the track and a streetcar is heading right for them. There’s a lever right next to you and, if you pull it, it will redirect the streetcar onto another track with only one person tied to it. What’s the right thing to do? This is a classic philosophical question. There’s not necessarily an easy answer. But we’ll get back to that.

In the middle of a pandemic, in which at least 180,000 people have died from COVID-19 in the United States alone, Loyola University New Orleans decided to reopen school and have in-person classes. In March, when there was one presumptive positive case between Loyola and Tulane, everyone was sent home.

In the school’s defense, the majority of colleges and universities are reopening with at least some in-person classes, although for many, such as UNC Chapel Hill and Michigan State, these plans have already failed. Unlike many schools that have tried to conduct in-person classes in the middle of a pandemic, Loyola has not implemented mandatory testing of any kind. Tulane next door had mandatory testing for everyone before school started and will continue to have mandatory tests throughout the semester, weekly for all undergraduates and twice a week for those living on campus.

Loyola had plans for optional testing. Then came two impending hurricanes, causing testing to be postponed. I understand that testing is organized by the city, but what I fail to understand is why weren’t in-person classes postponed until testing was resumed? Students were out and about on campus and taking classes before they had the opportunity to get accessible testing.

Loyola claims that with the new “safety measures” they have put in place, we are ready to reopen. “Safety measures” such as stickers on the floor and lawn signs reminding people to “mask up”? CampusClear is supposed to help, but I have seen no enforcement of it. Emails sent to students from the university state that we are to report our health statuses on there every day, including weekends. What if I just don’t report my symptoms? There has been no evidence of how the school will enforce non-compliance. Another issue is that it asks for symptom assessments, which does not help asymptomatic people. Research suggests that 30-40% of people show no symptoms when they get infected. How is CampusClear supposed to account for that?

Enforcement of safety measures seems to be a downfall for Loyola. Last week, my friend saw eight people go into an elevator that clearly stated the maximum occupancy was two, more than one of whom were wearing masks incorrectly. Trust in students only goes so far.

Loyola cannot just make suggestions about what to do and trust that students will follow. Saying that just gives the school an excuse when this presumably doesn’t work and we get sent home within the next three weeks. They will blame us while they cashout our checks for full tuition while we learn online.

It’s also clear that their trust only goes so far. They trust us socially but not academically? Programs that watch you take a test and monitor whether or not you click off the tab while taking a quiz have been implemented this semester. At the same time, the school has been projecting, now more than ever, how much they trust us to keep the school safe. If you cannot trust us not to cheat, how can you trust us to protect each other?

The cherry on top of it all was the emails from the school suggesting that we buy tuition insurance from GradGuard. “Because life doesn’t always go by the book” said the email. How insensitive was that? Hundreds of thousands of people have died from this virus and you’re making light of that? Is this supposed to make me feel better? As if my life might not be in danger because we are going back to an unsafe campus? Getting emails from the school, whose hands I put my faith and future into, asking me to insure my tuition in case I get coronavirus this semester because said school decided to reopen was the most dystopian moment I have experienced in my entire life so far.

All this proved is that higher education’s primary goal is making money, not the well-being of its students.

I know I could stay home and do everything online, although charging me full tuition to do so makes it really hard for me to choose that option. But this isn’t about me, it’s about us. We are that much further from solving the problem now.

Now back to the streetcar problem I mentioned at the beginning, except this scenario is a little different. There is only one track lined with people tied to it. You can pull the lever and stop the streetcar, but that would be a large financial burden on the streetcar service. This question seems much easier for most of us to decipher the right answer, but I can’t say the same for Loyola.

Loyola did not stop the streetcar.