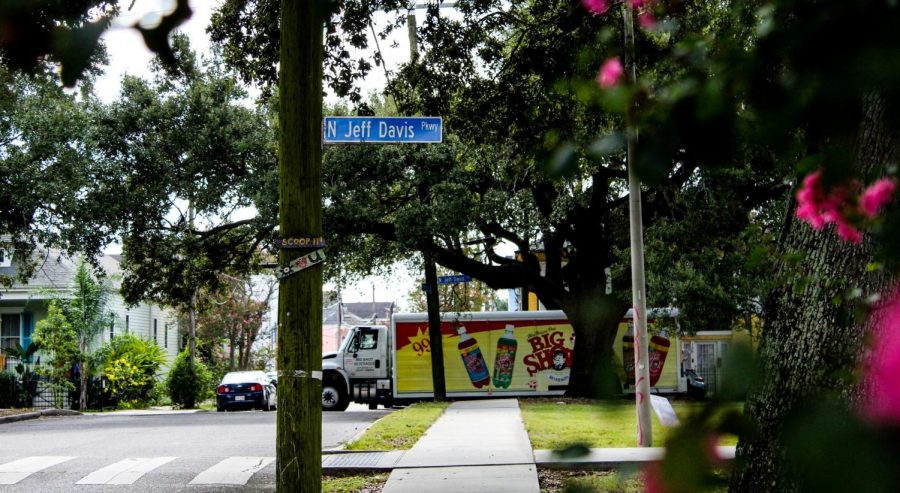 A truck drives past a street sign for Jefferson Davis Parkway on Sept. 3. A new city renaming commission voted to rename the street and is planning on considering renaming other streets named after Confederates in the coming weeks. Photo credit: Alexandria Whitten

455 days. That’s how long New Orleans was part of the Confederacy before it was occupied by Union troops.

About 100 years. That’s how long signs bearing the names of Confederate soldiers have occupied street corners throughout the city. And, according to a new City Council Street Renaming Commission, their time is up.

The City Council voted at the end of August to rename Jefferson Davis Parkway after Black activist and former Xavier University President Norman Francis after local activist Mark Raymond Jr., who is now a member of the renaming commission, began circulating a petition calling for the street to be renamed. The commission is now considering changes to 28 streets named after Confederates.

“We are not trying to erase history here, we are just trying to erase the memory of some of our darker past from our landscape because it is disrespectful to different groups of people. It’s not just like we disagreed with their views, they wanted to see people like me in chains,” Raymond, who is Black, said. “I grew up here driving down streets named after Confederates. I didn’t understand why they still existed.”

Although New Orleans fell to the Union in 1862, about a year into the Civil War, and few major battles were fought in the city, the physical landscape of the Crescent City is riddled with Confederate names and images.

Some of New Orleans’ biggest landmarks, the streetcar roundabout leading downtown and the entrance to City Park, were marked by monuments to Confederates until the city took four of them down in 2017 under public pressure from groups such as Take Em Down Nola. Street names exalting the likes of P.G.T. Beauregard, Robert E. Lee and dozens of Confederates still direct drivers through the city today.

Molly Mitchell, New Orleans studies professor at the University of New Orleans, said the creation of these tributes was not planned when the Confederacy existed, but after it fell, as a deliberate attempt by white Southerners to reclaim political power during a time when they were losing supremacy.

It was the mid-to-late 1800s and the Louisiana state constitution had mandated integrated public schools, formerly enslaved men had the constitutional right to vote and Mitchell, who is white, said white Southerners turned to monument building committees as a way to use private money to reassert their power.

“Their goal was to keep the memory of the Confederacy and who fought for the Confederacy alive. But this is all part of what historians talk about as a ‘lost cause mythology’ that took over after reconstruction. It was a very deliberate political move on the part of white southerners to sort of beat back and dominate southern politics once again,” Mitchell said. “It was both about the Civil War but also about white supremacy, establishing white political supremacy and white racial supremacy in the South.”

Confederate Veterans’ Associations as well as private social organizations largely dominated by white women, such as the United Daughters of the Confederacy, spent years during reconstruction fundraising money to memorialize Confederate generals, many of whom, such as Lee, had no direct ties to New Orleans.

“You can see the connection between these symbols that go up and the effort by the city to reimagine itself as this destination where you can come and celebrate the Confederacy, you can come celebrate this lost cause and we can make money off of you,” Mitchell said.

The street names honoring Confederate generals didn’t come along until the 1920s, decades after the Civil War, in what Mitchell said was another wave of white Southern desperation to cement power over the city’s history and future.

“If that’s the narrative you are promoting and you are actually putting it into the built environment, something that people have to see every day that doesn’t represent who they are as citizens, that in and of itself is a way to politically and culturally dominate because you have the power to do so,” Mitchell said of the statues and street signs. “It’s not history. It’s one narrative that people decided to tell at a particular moment in time for a very political reason.”

Raymond said the city commission will “absolutely” be announcing the renaming of more streets in the coming weeks and the plan is to move “rapidly” in the process.