Loyola senior grapples with saying goodbye to college during COVID-19

Stephanie Adams, history senior, walks to her first on-campus class on Sept. 4. Due to COVID-19, Adams is rounding out the end of her time at Loyola primarily on Zoom and is coping with the grief of losing out on a normal senior year. Photo credit: Michael Bauer

History senior Stephanie Adams never imagined her final year of college would look like this.

She had planned for Feminist Fridays surrounded by her friends and young freshman eager to talk for hours while nestled between couch pillows in the Women’s Resource Center.

She had planned for chaotic days chasing around kids while finishing her teacher certification at a local school.

She had planned for closure, for sorority socials, for a year that would help her say goodbye to the city that had become her home.

But when she stepped back onto campus for the first time this fall, the usually bustling quad was riddled with more signs promoting social distancing than people and Adams knew it wouldn’t be the year she had planned for.

“I called my mom and started crying because I was like, ‘This is not Loyola,’” Adams said.

Having lived on campus for three years, the hallways of the Danna Center and the stained glass windows of the Women’s Resource Center had become staples in Adams’ everyday life, giving her a sense of “home base.” 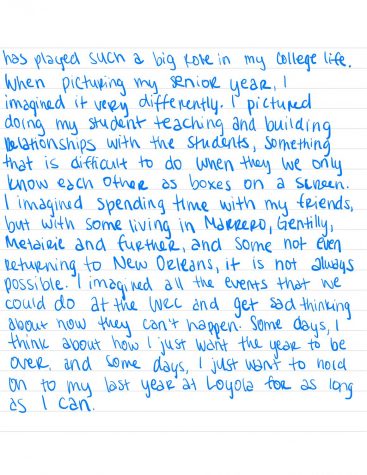 Now, she lives off campus and has one partially in-person class. Between her Loyola courses and working on her teacher’s certification at an elementary school that has gone online for the fall, Adams said she spends at least four hours a day on virtual learning.

“I have grown a hatred for my desk and my desk chair,” Adams said. “I get small breaks where I will literally turn off my camera and just walk down the hallway just so I am not sitting.”

For one of her classes, Adams joked that she likes to shake things up.

“Just for a change of scenery, I go down and sit at my kitchen table,” Adams said.

The actual logistics of her Zoom classes have also been rocky.

Right before one of her first classes of the year, Adams’ house lost power, leaving her in the dark and out of commission for the lesson. That same week, one of her professors tripped over a cord in his lecture hall near the end of class, cutting out the Zoom transmission.

Adams said she stuck around on the call hoping he was OK, trying not to laugh as she retold the story.

Humor and work have been Adams’ main coping mechanisms for grappling with the effects of COVID-19.

“I definitely like keeping busy, it doesn’t give me a chance to be sad,” Adams said.

In a journal about her senior year, Adams said she struggles with bouncing between trying to focus on the future and feeling the grief of losing out on the senior year she thought she would have.

“Some days I think about how I just want the year to be over. And some days, I just want to hold on to my last year at Loyola for as long as I can,” Adams wrote.