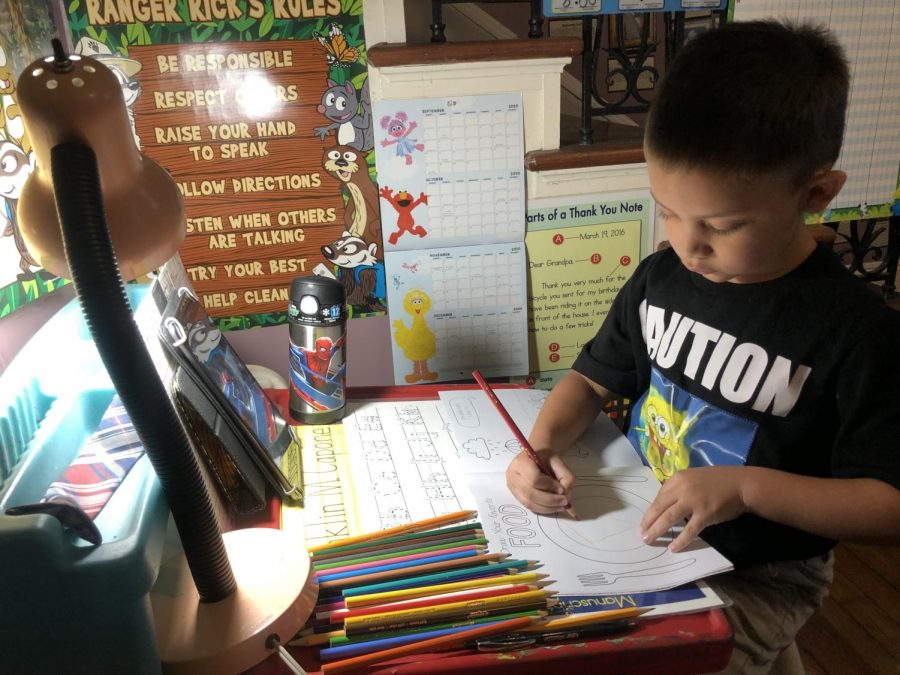 Posters upon posters of nouns, numbers and a handwritten note from mommy to son plaster the walls of Megan Braden-Perry’s New Orleans home.

Her son’s school went virtual due to COVID-19, so Braden-Perry created an at-home classroom decked out with a black history wall, brightly colored posters and a corner for Franklin, 6, to quietly relax in during study breaks.

Braden-Perry’s Aug. 17 tweet sharing photos of the room with her followers garnered more than 10,000 retweets. As a journalist and former educator, Braden-Perry said she has tried to create an environment closest to the normalcy of a first grade classroom that she feels her son Franklin deserves.

“Sometimes I would catch him, and he would just look sad. I’d say, ‘Why are you looking sad?’ And he would just say, ‘Oh, I hate the ‘rona. I miss my friends. I miss regular school.’ So, that’s another reason why I’m trying really hard to at least give him something. Nobody wants to hang out, rightfully so, and there’s no park to play in. So, you’ve got to bring other children to your house, and boy, that’s stressful,” Braden-Perry said.

Braden-Perry has hosted few guests lately, trying her best to quarantine, and she recognizes that because of the pandemic, her son hasn’t had the socialization that’s typical at age 6. When she had one of her friends over for a birthday dinner, Braden-Perry said Franklin lit up.

“He was like, ‘Oh my god! I’m going to show you my toys. Want to play Spongebob with me? Here’s the best part—you’re not watching the best part!’” she said. “He was just so on. And we both realized that, ‘Wait, this little guy hasn’t seen other humans. It’s just been me.’”

Loyola professor Kate Yurgil, an expert in trauma study, said that while COVID-19 has disrupted everyone’s sense of normalcy and socialization, how children cope with the changes depends a lot on parents implementing routines and finding creative ways to keep them socialized and learning.

“As with other behaviors, children look to other adults, other people around them, their teachers, their caregivers, and they see, ‘Well, what are other people doing? What’s the new rule?’ And they’re adopting that rule,” Yurgil said. “Now, whether they understand the why behind the mask wearing, that probably depends on the parents, the caregivers and teachers who are explaining the why.”

Yurgil also noted that it is typical for children of all ages to go through changes in emotion or behavior during traumatic events.

“You might see young children have more tantrums or emotional outbursts because a lot of this is incomprehensible to them. In older school-age children and adolescents, you might see more social withdrawal,” Yurgil said. “So maybe their school grades start dropping, maybe they don’t have an interest in extracurricular activities that they used to really like. You might see more instances of acting out, more instances of bullying.”

Loyola psychology professor and child psychologist Lawrence Lewis said parents should also be aware that over the past decade, children have developed anxiety earlier in their lives. Mounting pressure to succeed in school, for instance, has given way to the emotional symptoms associated with anxiety in kids as well as physical symptoms as severe as peptic ulcers that typically develop in mid-to-late adulthood.

“So certainly, stress is something to watch out for. And if children are showing signs of severe stress and anxiety, it may be appropriate for them to get some kind of counseling from the school psychologist or from a local social worker who specializes in childhood issues to help them process what’s happening,” Lewis said. “But most children are resilient as long as the parents are handling things well and giving children the appropriate tools to learn to face it well.”

Braden-Perry has adjusted to balancing several projects from home since her son’s birth in 2014, but she said she acknowledges the future’s uncertainty. For now, their posters, their weather wheel and the time-out corner that Franklin set up for himself are there to stay.

“Had it been like, ‘Okay, yes, we are officially only going to be in virtual school for one week,’ I might have put one poster up to help him with his ABCs, help him remember how to write them. I might have done that and called it a day,” Braden-Perry said. “But the way I’m looking at all the other schools that keep getting shut down within weeks of opening, I don’t want that. So I think we’re going to be here for a while.”