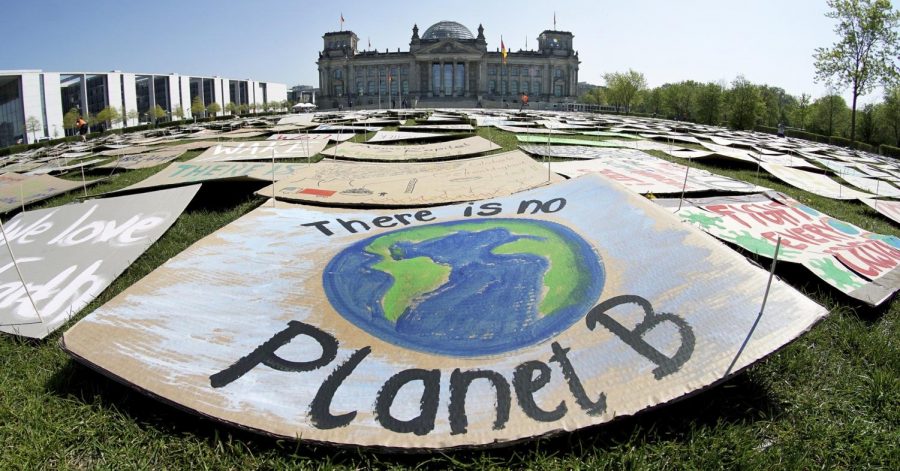 In this April 24, 2020, file photo, activists place thousands of protest placards in front of the Reichstag building, home of the German federal parliament, Bundestag, during a protest rally of the "Fridays for Future" movement in Berlin, Germany. Ten cities around the world, including Berlin, on Tuesday, Sept. 22, 2020, joined New York and London in committing to divest from fossil fuel companies as part of efforts to combat climate change. (AP Photo/Michael Sohn, File)

In the past months, we’ve seen devastating reminders of the impending threat of climate change. In the midst of a dizzying news cycle full of political turmoil and the tragedies of the pandemic, historic wildfires and the worst tropical storm season in years have certainly made headlines, but they still haven’t gotten the attention they deserve. These devastating disasters haven’t been random. They aren’t just another cosmic mishap thrown at us by the year 2020. They’re the result of deep-rooted problems that we have known about for decades. Those in power have decided to ignore these problems. We can’t afford to.

The climate crisis is getting substantially worse every year. Even as we begin to witness horrible devastation on a global scale, carbon emissions continue to rise. The Earth continues to warm. The clock is ticking. We need drastic action soon. It might already be too late. We’re not talking about abstract impacts far off in the future anymore. We’re facing a world that could well become unrecognizable in only a few decades.

New Orleans is sinking, and sea levels are rising. Much of the city is in danger of disappearing within our lifetimes. In the coming decades, we will see widespread coastal flooding, heatwaves, droughts, and more. The total number of wild animals on the planet has dropped by nearly 70% in only 50 years. According to the Intergovernmental Panel on Climate Change, we only have ten years in which to cut global emissions by almost half if we want to have any hope of avoiding the worst impacts of climate change. There’s no avoiding it. We’re running out of time.

There are a lot of small things we can do to help the environment. We all know about them. Walk or bike instead of driving a car when you can. Use reusable shopping bags. Conserve water and electricity. Reduce. Reuse. Recycle.

All of these things are good, but on their own, they ultimately won’t make a difference. The climate crisis affects every person in the world and every corner of the globe. We can’t solve it without drastic change on a massive scale.

The most important thing we can do is work together. We need political change first and foremost. Only 100 companies are responsible for 71% of global emissions. Yet, these major corporations continue to try to place the blame on individuals. The concept of the personal carbon footprint was created by BP—the same company that spilled hundreds of millions of gallons of oil into the Gulf of Mexico. Corporations continue to flood us with information about the ways we can make a tiny difference by upending our daily lives while simultaneously increasing their emissions and pollution year after year. They know what they’re doing. They don’t care. We can’t make them listen to us, so we need to use political power to force change.

Vote for candidates who support progressive climate policies. Research candidates’ stances on the environment carefully before casting your ballot. But know, also, that voting isn’t enough by itself either.

The only way to effectively pressure our government is through mass protest. If we’re going to make our voices heard, we need to be loud. We need to be impossible to ignore. So get out in the streets. Be disruptive. Make it clear to your leaders that you won’t stand for the status quo.