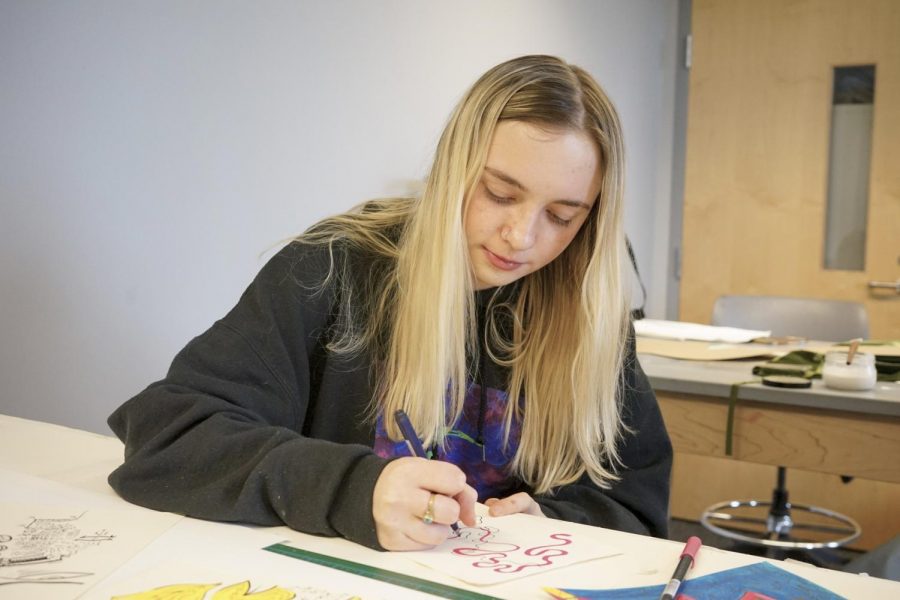 Fine arts junior Grace O’Malley wants to speak to the youth in abstract forms through her innovative style of t-shirts and gloss stickers that she sells on her Etsy store.

During her third year at Loyola, O’Malley wants people to see beyond the material while supporting local and upcoming artists just like her.

Born in Arlington, Virginia, she is inspired by the street art culture in New Orleans. By working in the print studio, she continues to make editions based in geometric abstraction and transferring them to t-shirts available in different styles of black, white and dark green.

Cubism is what she calls her instinctual artistic style, as it allows her to achieve depth and visual dimensions. “I like to play with composition. I think there’s a way to make peoples’ eyes move through a page. The longer you look at something, the more you’ll see,” O’Malley said.

Currently focusing on designing shirts, her process has evolved. By drawing out her ideas and uploading them to Photoshop in order to color them digitally, the design transfers to a stretch lithograph system. The quality ensures the prints do not disintegrate overtime, which she claims is an upgrade from previous shirts.

In addition to her selection of t-shirts, high gloss stickers are available at the online shop. The images on them include patterns filled with different linear elements and eyes, which are a repetitive symbol represented in line work patterns.

The stickers works as simple decoration but can also act as “coverage” for webcams or hidden cameras. O’Malley’s take is a social commentary on societal panic surrounding the government’s surveillance state, caused in the past decade by the controversy with N.S.A. whistleblower Edward Snowden.

Referring to the abundance of surveillance in our society, she wants to play with the themes of abstraction as a social commentary, and encourage the viewer to question everything. This relates to her interest in local street art. “Graffiti is a commentary on what’s broken. Especially in New Orleans’s gentrification, it is a huge way of fighting that,” O’Malley said. “I think it’s important to support art because it’s a huge way of changing and pointing out problems.”

O’Malley also believes that art is experienced differently by everyone.

“People are like, ‘Is that a bird? Is that a tree?’ Usually, I’m not trying to represent a material object. Whatever people say, it is always says more about them than it does about me,” O’Malley said. “I think it’s like a psychological experience.”

Consequently, she stands against gatekeeping in the art community.

“Anything that you are expressing yourself with is art: music, makeup, whatever. I’m not interested in doing a picture of my soul or some fruit. There’s a lot more than what we see in front of us,” O’Malley said.

Ultimately, what defines her style is her conviction not to conform to realism.

“I see past the material stuff. I don’t care about drawing the human figure,” O’Malley stated. “In art, the creation of it ensures the form itself more so than having a plan of what it’s going to look like. I start somewhere, which organically evolves into what it is.”

Her next goal is to branch out her brand and utilize different mediums such as metal sculpture studio to create three-dimensional cubist statues, as well as ceramics, quilting, crochet and more wearable art pieces.