The Maroon creates alumni board to promote racial diversity 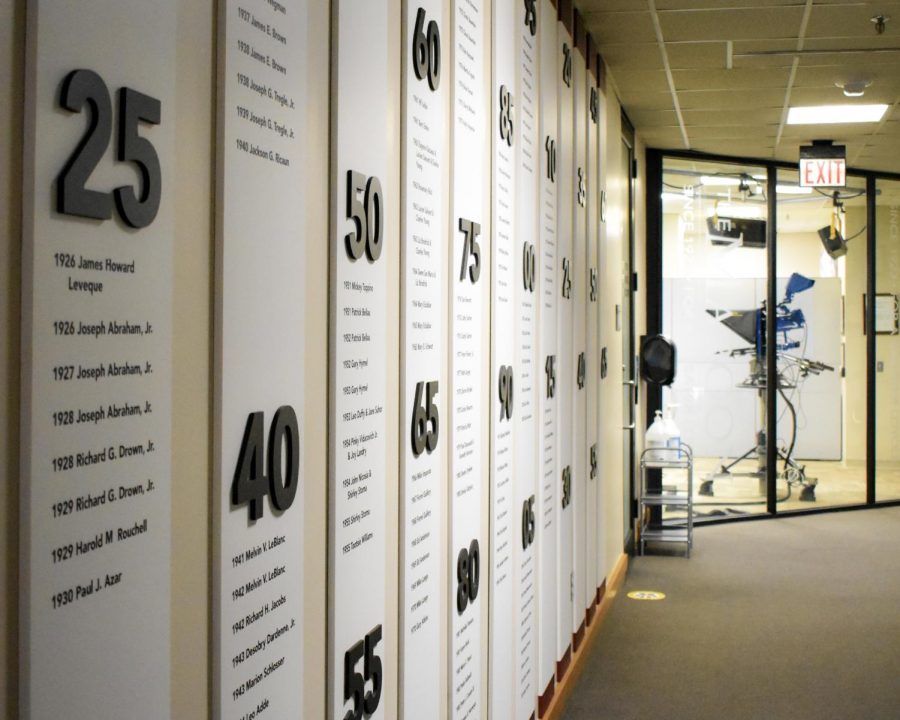 The Maroon office's editors' wall features the names of alumni previously holding the position of Editor-in-Chief. With the School of Communication and Design’s new diversity and inclusion plan, The Maroon began the search for alumni to join the board earlier this semester. Photo credit: Maria Paula Marino

After The Maroon reported on allegations of racism against former director of The School of Communication and Design Sonya Duhé earlier this summer, the student newspaper partnered with the school to announce its creation of The Maroon Alumni Board, which aims to promote diversity and inclusion, with an emphasis on race, in the newsroom and the department.

The board will consist of former staff of The Maroon who now have successful careers in journalism, allowing for current staff to interact with professionals, particularly journalists of color, in the field who were once in their shoes.

Members include Larry Graham from the American Press Institute, Joe Danborn from the Associated Press, Ylan Mui from CNBC, Ramon Vargas from NOLA.com, Craig Malveaux from NCAA and Erica Henry from CNN, who isn’t an alumnus but is serving as a friend of The Maroon, according to Michael Giusti, The Maroon’s faculty advisor.

“Every opportunity an undergraduate has to interact with someone with experience in their field –– whether that is a professor or a mentor –– is an opportunity to grow,” Giusti said.

Giusti, Lisa Collins, interim director of the School of Communication and Design, and Larry Graham, the diversity chair for the Associated Press’ sports editors, have led the charge to create a new space for alumni and students to promote diversity.

The decision to create The Maroon Alumni Board is part of the newspaper’s larger initiative to create diversity both in the newsroom and the news it reports.

The board began conducting audits for the past year, which will monitor The Maroon’s diversity and inclusion efforts.

This will keep track of the racial diversity of sources used for stories over the course of a semester to ensure every voice in the community is being heard.

Along with this, the board has conducted an internal census which documents the racial makeup of all Maroon staff.

When it comes to The Maroon’s editorial board leadership, 56% of the editors are white, while 17% are Black, 17% are Hispanic and 10% identify as “other. “

When it comes to the newsroom as a whole, including writers, photographers and all staff members, The Maroon is 45% white, 24% Hispanic, 22% Black and 8% of staff members identify themselves by another racial marker.

“This is meant to be a systemic approach to our content and organization that will hopefully result in The Maroon being the mirror and lamp it is charged with being,” Giusti said.

Graham said he felt especially inspired to be a part of the plan after the former director, Sonya Duhé faced allegations of racism this summer.

“We wanted to help create an environment where people could speak up,” Graham said.

The board will require each new round of staff members, including The Maroon’s editorial board, to attend PAWS and Reflect training, a diversity and inclusion exercise that staff recently completed this year under the guidance of Heather Malveaux, the university minister for social justice.

Wagner acts as a representative of The Maroon on the board, along with Gaby Carballo, The Maroon’s managing editor for print.

Wagner hopes to incorporate the board’s discussions about diversity into the heart of The Maroon’s purpose. For Wagner, this means adding a diversity mission statement to The Maroon’s constitution.

“It’s about setting that standard for all the years of the newsroom to come, a standard of what diversity in our newsroom looks like, why we value it, how we value it and how we’re going to uphold it,” Wagner said.

The board is in its developmental stages, but its initiatives have already begun to take effect. Still, board members hope that this is only the beginning. Wagner said the School of Communication and Design have lost the trust of students of color, and this is a step to earn that trust back.