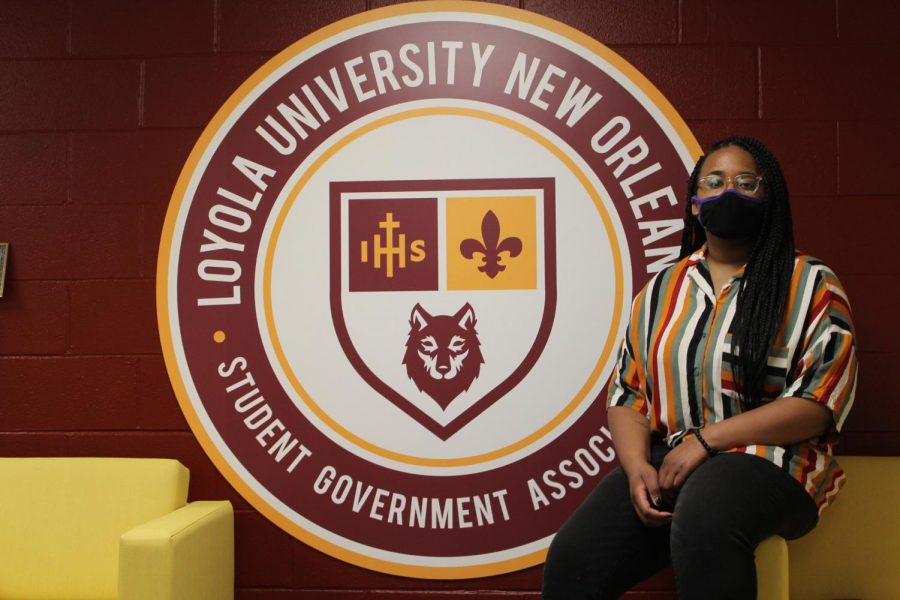 Brionna Wilcher-Hudson takes a seat next to a decorative seal inside Loyola's "SGA hub" Oct. 21. Wilcher-Hudson founded Loyola's chapter of the National Association for Colored People earlier this month.

Loyola chartered a college chapter of the National Association for the Advancement of Colored People on campus on Wednesday, October 7.

Sociology sophomore Brionna Wilcher-Hudson is responsible for establishing the organization in the university’s student community.

“During quarantine, I was asking myself, ‘What is something that the Black students at Loyola need?’ We need something that’s fighting for causes that don’t just affect Loyola students, but the surrounding Black communities,” Wilcher-Hudson said. “I started doing my research. The NAACP was just the best way to go.”

Members of SGA, who approved the chartering of the chapter said, said they are excited about the opportunities the new organization could bring to campus.

SGA President Freedom Richardson said that the NAACP is a “respected organization,” and that the chapter will “have their hands full in mobilizing not just Black students at Loyola, but poor and marginalized students at Loyola and in the community.”

“My hopes for the organization are that they amplify the voices of Black people on and off campus,” SGA Director of Equity and Inclusion Cheyenne Williams said. “There has been a history on Loyola’s campus where Black students feel that they aren’t being heard.”

Williams said she is excited about Wilcher-Hudsen’s leadership and that she is a “strong-minded and hard-working person.”

“She is willing to put herself at the forefront of any type of adversity to ensure the safety and security of her friends and the people around her,” Williams said of Wilcher-Hudson.

BSU treasurer Robert Morrison said that the most important part about the chapter was it’s well-known name.

“When you hear the name NAACP, that is something that is nationally known—it’s recognized across 50 states,” Morrison said. “Having that presence here on campus shows a level of sophistication as well as history. Bringing this to our campus is a great idea.”

According to Wilcher-Hudson, students who become affiliated with the chapter can expect to obtain “leadership and professional skills to prepare them for life beyond Loyola.”

Wilcher-Hudson said that she wants to set a “strong foundation” with the NAACP chapter on campus.

“I don’t just want to do (one) event. I want to make sure we are building,” Wilcher Hudson said. “My main goal for the NAACP at Loyola’s campus is to really have a firm foundation or group that’s giving back into the black community.

Meetings for the association will be held bi-weekly, on Mondays, via Zoom and meetings are open to all students. Anyone in need of assistance with the process of becoming affiliated with the chapter may contact Wilcher-Hudson directly.