“The Trial of the Chicago 7” review: A thrilling and timely legal drama 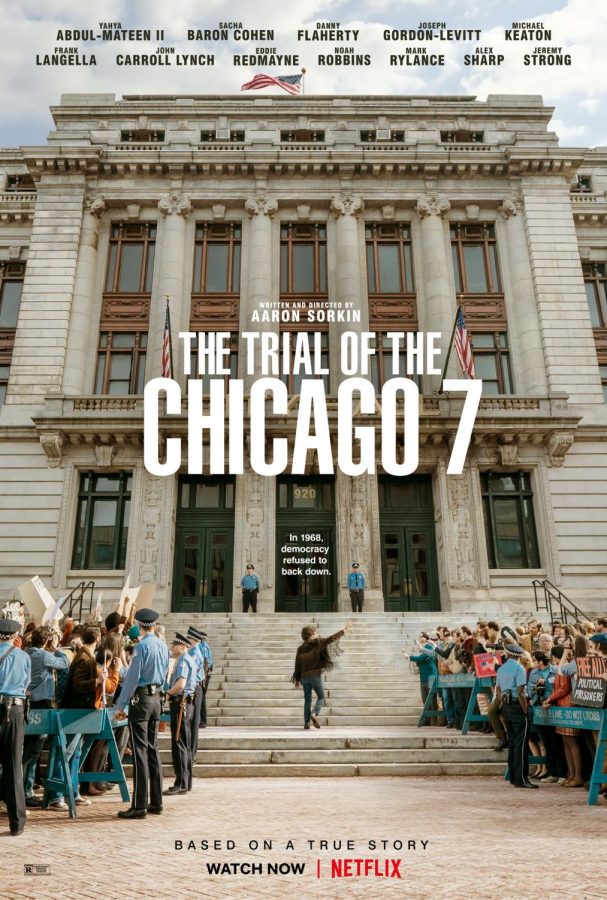 Aaron Sorkin’s latest film “The Trial of the Chicago 7” shows the writer and director at his best, perhaps since writing the Academy Award-winning screenplay for David Fincher’s “The Social Network” in 2011. He presents an immensely entertaining courtroom drama, one that has its finger on the pulse of what is going on in the present day.

The film’s title refers to the real-life federal trial in 1969, in which eight prominent anti-Vietnam War activists stood trial for charges of conspiracy to cause riots at the Democratic National Convention in Chicago during the previous year. They include Students for a Democratic Society co-founder Tom Hayden, played by Eddie Redmayne; the infamous Yippie co-founders Abbie Hoffman and Jerry Rubin, played by Sacha Baron Cohen and Jeremy Strong; and Black Panthers leader Bobby Seale, played by Yahya Abdul-Mateen II (Seale was later dropped out of the case before verdicts were passed, and then there were seven.).

The proceedings are led by Judge Julius Hoffman, played by Frank Langella, who repeatedly reminds everyone that he is not related to Cohen’s Hoffman. Judge Hoffman stands on the edge of incompetence and evil, at least in Sorkin’s interpretation. He binds and gags Seale in court in what is one of the more bizarre scenes in the film, and keeps handing out citations for contempt of court like they are candies. But then again, Sorkin plays it all in the context of the craziness of the times, where violence and paranoia have completely overwhelmed the collectively clean-cut facade introduced by the Kennedys earlier in the decade.

The seriously impressive ensemble cast also includes Mark Rylance as the Chicago Seven’s defense lawyer William Kunstler, Joseph Gordon-Levitt as prosecutor Richard Schultz, and Michael Keaton as former attorney general Ramsey Clark. They all waste no time sparring each other in Sorkin’s crackling dialogue. There are lots of interesting individual scenes in the film, from Cohen’s acerbic jabs to Redmayne’s sobering presence. There is plenty of acting moments to savor in “The Trial of the Chicago 7,” as Sorkin’s engaging wordplay is used in spades.

What’s interesting about the film is that it gets right into the business of the trial rather than building up to it. Sorkin’s first screenwriting credit, “A Few Good Men,” takes its time getting the audience up to speed with the premise, as well as the daily life of Tom Cruise’s swaggering yet ultimately untested lawyer Dan Kaffee. Director Rob Reiner makes sure that the audience has enough proof to lay their cards on Kaffee, right when hour one of the film ends and the trial proceedings begin.

By contrast, “The Trial of the Chicago 7″ wastes no time with its own tribunal, opting for the audience to get to know the main characters over the course of the trial. Sure, there’s a 20-minute primer on the tumultuous historical events leading up to the main event, such as the assassinations of Martin Luther King and Robert F. Kennedy, but it serves as a way for Sorkin to frame the film as a way to re-examine the present-day American psyche. Did we get progressively worse since 1968, or is history repeating itself?

It is important to note that Sorkin dramatizes the events surrounding the trial. The real-life incarnation is decidedly more complex and not as black and white as the director seems to imply. But then again, Sorkin was not always interested in realism. Instead, he is more well versed in the art of liberal theatrics and rhetorical arguments, something he mastered so well in “The West Wing.”

While the dramatized history of the Chicago Seven makes for great entertainment, there is an undeniable feeling that there is little to no emotional stakes at play. There are some storytelling liberties that feel forced and serve no purpose, such as a subplot where a female FBI undercover agent played by Caitlyn FitzGerald uses Rubin to infiltrate the protest leaders. Moreover, the film feels manufactured, polished and ultimately a little on the safe side, rather than a complex and potentially more compelling one with the likes of “12 Angry Men.”

Perhaps the main reason why a film like “The Trial of the Chicago 7” greatly appeals to everyone is because of its timing. With a divisive presidential election on the horizon accompanied by frequent clashes between the protesters and the police, one can see how Sorkin’s latest film has that rare and timely power. “The Trial of the Chicago 7” may be overwrought with theatrical sheen, but at the end of the day, it is a timely and engaging legal drama.

To watch “The Trial of the Chicago 7” on Netflix, click here.