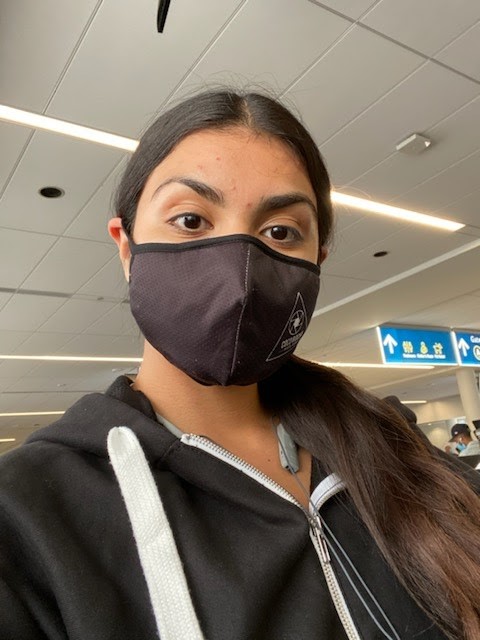 Rocio Valenzuela (pictured) wears a face mask in the Charlotte International Airport in North Carolina. All travelers are required to wear face coverings in the airport and on airplanes to reduce transmission of the COVID-19 virus.

As the seasonal Fall and Winter holidays approach, airlines enforce COVID-19 safety guidelines to prepare for a potential surge in cases and help travelers feel less nervous about flying.

People traveling from different places increase the risk of infection and spread of COVID-19 among gatherings, according to the CDC’s website.

“You have your people who are very careless; don’t care and want to make it to their flight like, ‘I don’t care, I’m going to push by this person and touch them,’ even when we’re in a pandemic. It’s always those people that ruin it for the rest of us,” said Valenzuela.

Valenzuela had to take a connecting flight from Arizona to the Charlotte International Airport in North Carolina to reach New York. While in the airport, she noticed most people wore masks but were not socially distanced.

“People were trying to, but I felt like there were so many people that they couldn’t social distance,” said Valenzuela.

Airports, such as, The Louis Armstrong New Orleans Airport is following Louisiana state and the CDC’s guidelines for travelers to navigate TSA and terminals.

Travelers can bring 12-oz bottles of sanitizer in carry-on bags, practice social distancing with six-feet markers taped on the ground and wear facial coverings while in the airport, according to Louis Armstrong New Orleans Airport’s website.

During her flight, Valenzuela sat next to an older woman (all passengers were required to wear masks), and she said flight attendants didn’t serve food or beverages on the flight to reduce transmission of the virus.

United Airlines flight attendant, Amber LeBlanc, said her airline hands out snacks in pre-packaged bags, drinks are in unopened cans, and the planes “are being sanitized heavily in-between each flight more than ever before.”

LeBlanc and several other United flight attendants have recently been furloughed and are unsure when they’ll be back to work.

She also was unsure how United will handle a potential surge of travelers with lack of staffing.

“I’m not sure to be honest. I’m sure people will be traveling more,” said LeBlanc.

The Maroon has reached out to several American airlines to ask if there were safety measures being put in place for potential upcoming holiday travel. No airline has responded for comment, except for Delta Airlines, who said, “Thank you for your recent inquiry. Unfortunately we are unable to accommodate your request.”

Several airlines, such as American Airlines, have included commitment statements on their websites for travelers who will be flying.

Planes are equipped with sanitizer on all flights, seats and over-head bin handles are “deep-cleaned,” additional sanitization of food-prep areas, and aircrafts will be treated with SurfaceWave2, a coating that kills 99.9% of virus in the upcoming weeks, according to AA’s website.

In addition, American Airlines requires passengers to leave their facial coverings on during the entire flight, apart from eating and drinking. If someone refuses to cooperate by wearing face masks, they are escorted off of the flight.

Though Valenzuela said she felt safe while traveling, she plans to remain home for the upcoming holiday season to not contract the virus.