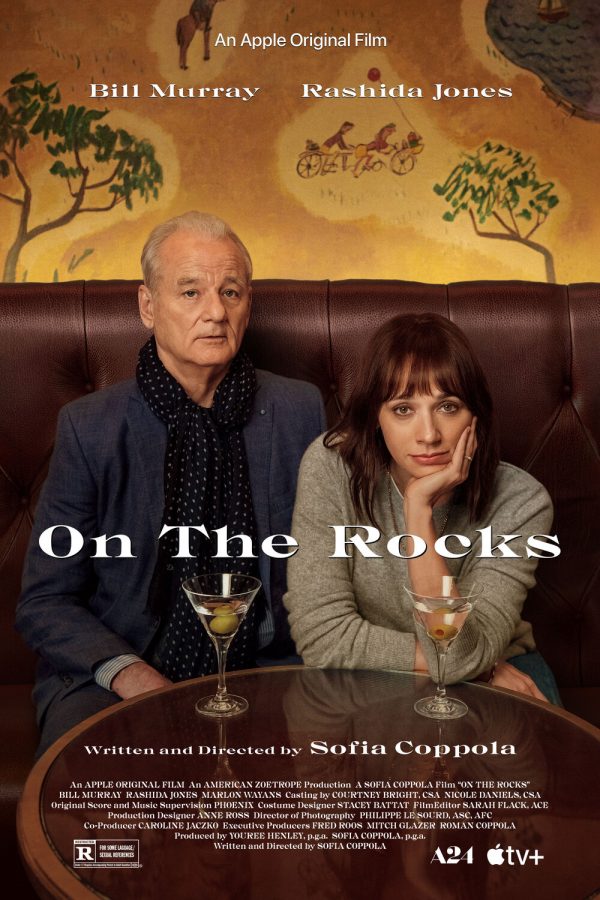 Sofia Coppola’s latest film may come and go, like a vintage Italian sports car running a red light on a slow night. Still, “On the Rocks” is a refreshingly light take on a paternal relationship, one perhaps inspired by Coppola’s own experiences.

Produced by A24, the film follows Laura, played by Rashida Jones, who is a successful author living in New York City. She currently focuses on taking care of her two kids, which unfortunately stifles her creativity. What’s more is that she increasingly fears that her husband Dean, played by Marlon Wayans, might be having an affair. Laura decides to seek help from the last person to talk to about marriage woes: her playboy father Felix, played by Bill Murray.

What follows next is a series of misadventures with father and daughter, as Felix offers understated quips on human nature and what it means to be free-spirited. “Do you know a woman is at her most beautiful between the ages of thirty-five and thirty-nine?” he asks in one scene. Laura cannot relate or otherwise groans at the dad jokes, but nevertheless goes along with his supposed words of wisdom. Hence her reply: “Great, so I have many months left.”

Coppola reunites with Murray after previously working together on “Lost in Translation” and the Netflix Christmas special “A Very Murray Christmas.” The actor is in good form, and in good company, as he fits right into his role as Felix. Aging like fine wine has allowed Murray to deliver lines deadpan and still be entertaining. Having worked with the actor before, Coppola lets him loose, as the former comedy fixture continues to enjoy his well-deserved renaissance in current independent films.

What is striking about “On the Rocks” in the context of Sofia Coppola’s filmography is that it does not feel like a textbook example of her typical works. After almost two decades of demythologizing celebrities and a doomed French queen, as well as dealing in unforgettable iconography, the director is finally content to create a light and breezy film. The cinematography from Philippe Le Sourd, who also shot Coppola’s recent remake of “The Beguiled,” is unrelentingly easy on the eyes, while music from Chet Baker to Phoenix meld together in the atmospheric metropolis that is New York City.

The light tone of the film may have the unfortunate effect of making it one of Coppola’s weak efforts, as there is ultimately nothing memorable about the film. In fact, it concludes its proceedings on a frustrating note. Even as Laura eventually calls her father out on his lifestyle for the psychological damage it has caused to their family, the film sweeps it all under the rug. Sure, there’s some acknowledgment in the end, but Coppola manages to refrain from tackling questions of fidelity.

Maybe it is how she envisioned it: a lighthearted take on a paternal relationship. Yes, it truly glosses over the deepest recesses of the human psyche that might otherwise reveal painful truths, something the likes of Ingmar Bergman can tackle to great effect. But this is Coppola’s world, and everyone is just gonna have to take it or leave it. Ultimately, “On the Rocks” is a nice change of pace for a revered filmmaker who has inspired a generation of independent filmmakers to think visually, in what seems to be an effortless way but is actually full of rich subtext.

More importantly, “On the Rocks” is also considered an ode to her relationship with her famous father. Of course, if your dad directed “The Godfather” and “Apocalypse Now,” you’re guaranteed to avoid a parking ticket when you get pulled over one night for speeding. But for what it’s worth, Coppola’s honest portrait of a creative force being weighed down by domesticity feels sincere and well-earned. Nobody expected the director to pull off a comedy, but when you’ve got Bill Murray as a chatty old dad, it’s going to be a fun ride.

To watch “On the Rocks” on Apple TV+, click here.