First in the PACK creates community for first-generation students 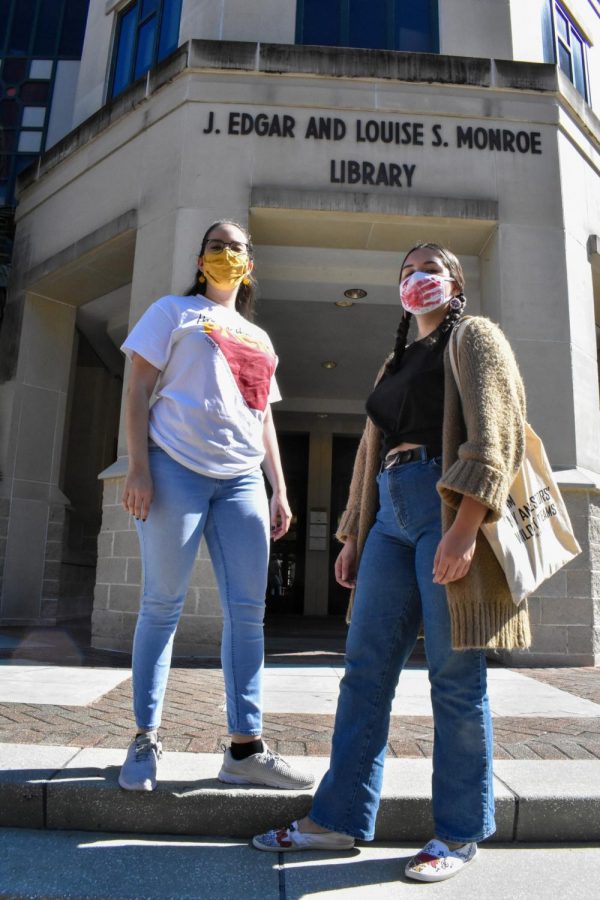 First in the Pack students Francesca Lausen and Cynthia Russell became good friends through the organization last year. Cynthia came to Loyola representing her home, the Clifton Choctaw Native American Reserve, and wants to bring attention to the violence Native American women have to face all over the country. Francesca's family is from San Juan, Puerto Rico; being a very involved student at Loyola, Francesca has plans of attending grad school after she graduates this upcoming semester. Photo credit: Maria Paula Marino

Loyola’s organization for first-generation college students, First in the PACK, is working to create a community for students to be supported and celebrated within Loyola even amid the ongoing COVID-19 pandemic.

Cynthia Russell, psychology sophomore, said she is no longer a student who is “without or less than anyone else.”

“I am now a student who is honored because I am first-generation, and I did that,” Russell said, who started out as a mentee with First in the PACK in 2019 as a freshman mentee and has since moved to a mentor position.

Loyola’s First in the PACK program began in the spring of 2013 by a network of Loyola staff and faculty members to provide first-generation students with a network of support, resources and mentors.

Aviles said she believes that Loyola’s first-generation students are hard-working, adaptive and dedicated. According to Aviles, in the 2019-2020 school year, the average GPA of a first-generation student in First in the PACK was a 3.0 cumulative GPA. She also said that 90% of students maintained that GPA between their first and second years. The same year, First in the PACK mentors had an average GPA of 3.64.

This year’s cohort includes 36 first year, first-generation students and 19 peer mentors. The First in the PACK Committee consists of members from both career development and advising within the Student Success Center.

Veronica Aviles has served on the First in the PACK committee since the Summer of 2018. Aviles herself was a first-generation student and said she wished there was a program like this when she was an undergraduate.

“I truly feel I would have benefited from having a mentor to guide me through those moments of self-doubt and academic difficulties,” Aviles said.

Aviles said she believes that one of the most significant benefits to First in the PACK is the community. She said it provides a space for first-generation students to not feel alone through uncertainty, challenges and opportunities.

“Having a group of first-gen students that I can connect with reminds me of why I fought so hard to get here, but it also reminds me that I’m not alone,” Russell said.

In 2017, Francesa Lausen, psychology and criminal justice senior, joined First in the PACK as a freshman who wanted the confidence older college students had. Over the past four years, Lausen said First in the PACK has taught her the value of networking. Lausen said she now feels more comfortable asserting and introducing herself while making connections.

Tehya Littleton, psychology pre-health sophomore, who joined First in the PACK as an incoming freshman and is now a peer mentor, said she’s seen herself grow in terms of “not being afraid to be the first.”

“Oftentimes, I felt different because most of my peers weren’t first gen, and it left me feeling like an imposter,” Littleton said.

During the COVID-19 pandemic, First in the PACK has held its training sessions for faculty, staff allies and peer mentors via Zoom. Aviles said that she has made it her focus to provide access to resources and technology. She said that faculty wanted students to have a safe space and opportunity to disclose their necessities to connect them with essential resources, especially when students are now reliant upon connecting virtually.

Lausen is working on getting into a clinical Ph.D. program helping children with feeding and eating disabilities, disorders and maladaptive behavior patterns. After Littleton graduates, she wants to attend medical school. Russell plans to travel the world and help native tribes with poverty, alcoholism and preserving culture after graduation. They will take with them the confidence and networking skills they’ve acquired from First in the PACK.

“I have grown into the woman I am today with this program,” Lausen said. “I love this program, and it will be one of the things I miss the most about Loyola.”