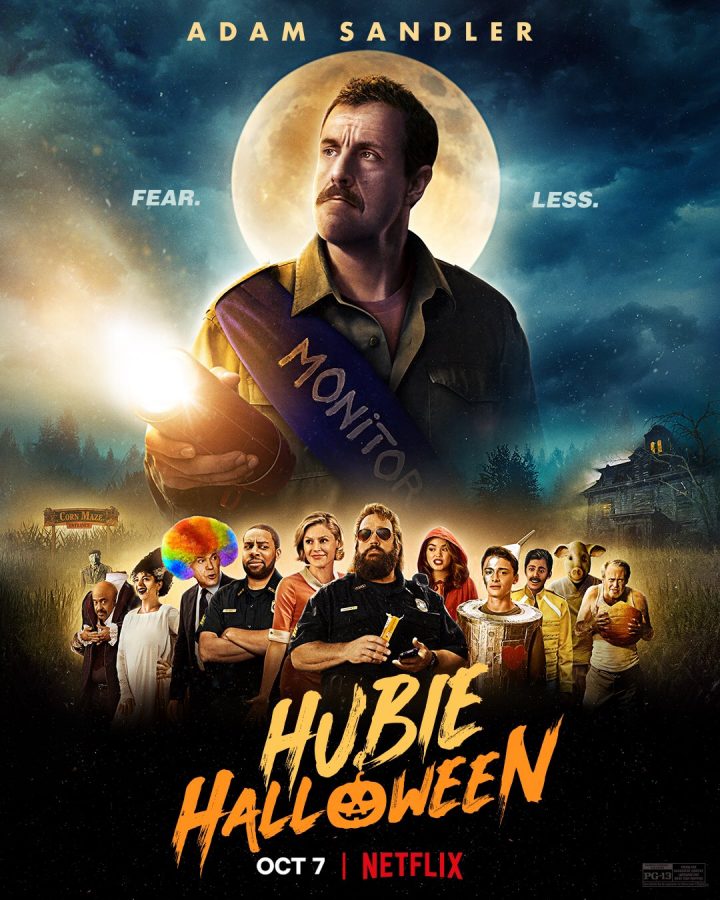 Just in time for Halloween season, director Steven Brill’s latest film “Hubie Halloween” was released for viewing on Oct. 7. Starring actors such as Adam Sandler, Noah Schnapp and Julie Bowen, the comedy horror tells the story of an unconventional hero and serves as a tribute to late actor Cameron Boyce, who was originally part of the cast.

Set in the town of Salem, Massachusetts, the narrative follows delicatessen employee and target of the town’s bullies Hubie Dubois as everyone prepares for the busiest time of the year. Played by Sandler, the protagonist is portrayed as a man whose kind acts for his fellow townspeople are constantly underappreciated. Viewers watch as he brushes off prank after prank, all set up to humiliate him. While children set off to the streets in costume and teens sneak out to parties, Hubie decides to take on a larger task: capturing a murderer.

Being the unique character Hubie is, it becomes clear as the plot moves on that nobody could have embodied him the way Sandler does. Known for his roles in dozens of movies including “Bedtime Stories” (2008) and “Grown Ups” (2010), the actor’s capacity to make audiences grin is apparent here more than ever as he transforms himself into Hubie. It feels unlikely that the character’s essence could have been captured by anyone else, and Sandler is definitely the driving force in the Halloween film.

Aside from the fairly well-known cast, “Hubie Halloween” is practically loaded with cameos starring some of the funniest actors and comedians known in today’s world. Appearing for minor roles include Ben Stiller, Tim Meadows and Colin Quinn, among others. American basketball player Shaquille O’Neal even pops in for a few scenes near the ending. The feature-length tribute also does an impressive job at jam-packing the screen with faces that are likely to be recognized by those who grew up in the early 2000s by including actors from Disney shows like “Jessie” (2011) and “A.N.T. Farm” (2011). This aspect adds flavor to the movie and constantly leaves viewers feeling as though they are seeing an old friend.

However, as impressive as the cast is in the film, the level of comedy attained falls strikingly short of its expectations. Full of jokes revolving around bodily functions and repetitive jump scares, the immature humor crosses over the line of being silly into the realm of being exceedingly corny. This disappointing contribution weighs the movie down greatly and is likely the reason many viewers will decide against sitting through the entire thing, and it is understandable.

All in all, “Hubie Halloween” is light-hearted and feel-good but overwhelmingly juvenile. With a PG-13 rating and yet including a multitude of childish jokes, the target audience is left a mystery. Is it a sufficient form of entertainment? Yes. But a first glance at the cast list or description will likely set you up for disappointment.