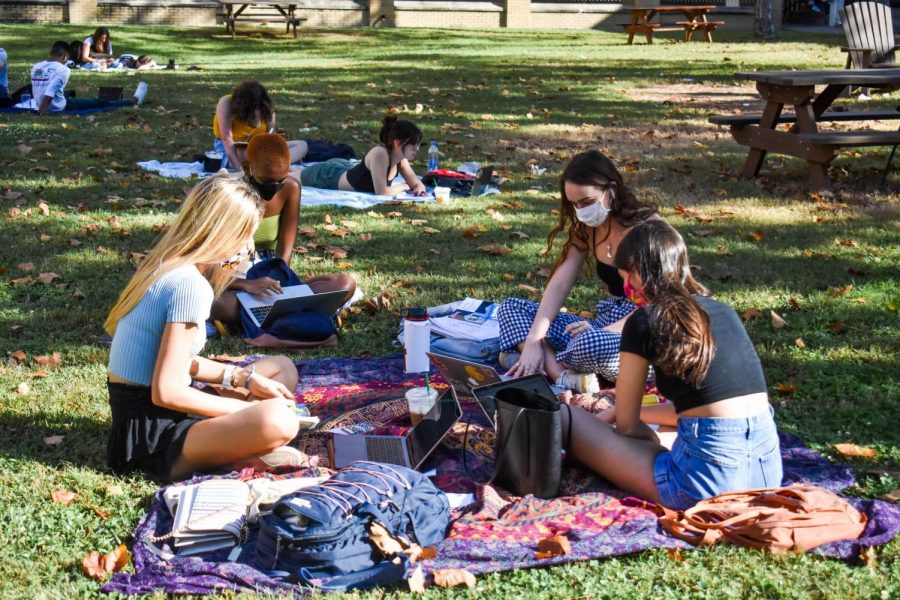 Students study in the residential quad on October 22, 2020. Safety guidelines this semester include requirements for students to wear masks in public spaces on campus. Photo credit: Maria Paula Marino

The COVID-19 pandemic has continued to highlight systemic racism in the U.S., resulting in disproportionate caseloads and deaths in BIPOC communities, particularly in Black and Indigenous communities, throughout this country. The CDC concluded that discrimination, access to healthcare, income inequality, workplace exposure, and housing conditions are some of the many socioeconomic factors that have contributed to the racial inequities in COVID-19 cases and fatalities.

The information above is well documented and readily available, yet it needs to be reiterated in this context, as COVID-19 cases continue to rise on campuses, with at least 214,000 cases and rising traced back to college and university campuses across the country.

While Loyola stresses its support for Black lives and advertises its racial diversity to attract students, it consistently fails Black students and community members with actions that conflict with its expressed Jesuit values.

Systemic racism is, by definition, pervasive and requires creative responses that Loyola is well equipped to implement. Unfortunately for us, Loyola has done nothing to address the multiplicity of ways that its decision to open campus for in-person classes will disproportionately harm Black students, staff, faculty, and community members. Loyola has chosen to ignore or actively silence those who have spoken out against the institution for its role in perpetuating systemic racism. For example, Loyola has yet to release the recording of a Town Hall held on June 11, 2020 which was centered around racism and bias at Loyola. By refusing to release this recording after multiple requests from students who attended via Zoom, the university is essentially silencing their voices.

Instead of choosing the safest option available, conducting classes online, Loyola chose to have students return to campus. This irresponsible decision brought possible vectors into the community and risked the health of the students and community members alike. This option also included informing non-freshman students they would be on their own when it came to housing. As a result, numerous students were forced to negotiate the housing market during a pandemic and mounting economic uncertainty. This decision making was reckless and disproportionately affected BIPOC and lower income students. Loyola’s justification was that freshmen needed an “on campus experience,” that they had run the numbers, and decided to take a gamble on our lives.

Their explicit reasoning alone is an abhorrent rationale, but if we probe the underlying motivation it is clear this is really all about money. Loyola knew that announcing fully online classes might discourage some incoming students, and if their enrollment suffered, how would they pay their top administrators $300-$400k in salaries and benefits? By reinforcing the idea that this plan is just as good as a regular semester at Loyola, they can justify charging us the same tuition rates, and pushing through a tuition hike on top of that!

Based on the cost of online education advertised on Loyola’s own website, tuition should be $450 per credit hour for undergraduates and $818 for graduate students and law students. The flexibility of online courses and technological advantages should be leveraged to increase accessibility and quality of education, not used to impose draconian surveillance techniques that invade our homes and privacy.

All classes should be recorded, and available through the end of the semester. All classes should be optionally asynchronous. All classes should be closed-captioned. Cameras should not be mandatory, ever. Allowing professors to determine accessibility on a case-by-case basis is inequitable for a variety of reasons. Students have varying access to technology, unpredictable work schedules and realities, and so do professors and staff, especially given the economic conditions brought on by COVID-19. Choosing an approach that shifts critical decisions onto professors is reckless, and a dereliction of administrative responsibility.

LoynoRISE developed as a coalition of students and workers with the hopes of amplifying the voices of BIPOC students and workers of color, individuals with disabilities, LGBTQIA+ folks, lower income students, and the surrounding community. We hope to bring Loyola into alignment with its own professed values, the same values that attracted many of us to attend in the first place.

Though we may be more vocal than most, we are certainly not alone in our concerns for the safety of our community. Through polling about 60 of our fellow classmates via a Google Form survey distributed through social media, we’ve found that 55.9% of respondents felt unsafe returning to campus. The overwhelming majority, 84.5%, indicated that campus should only be reopened if Loyola provides free and regular COVID-19 testing to students, staff, and faculty. 77.9% of respondents felt that re-opening Loyola’s campus increased the health risks for the surrounding New Orleans community. Additionally, 98.3% of respondents were in support of hazard pay, increased paid sick days, and adequate PPE for all people working in Loyola owned facilities.

The bottom line is Loyola University gambled with people’s lives this semester, and we still have no idea what is to come in the spring semester. Continued inconsistencies and inequities can only be expected. We need real student representation in the administration. We support tuition free higher education, but until we get there, we deserve a voice in the decisions they make with our money.