University campaign spotlights why we mask up 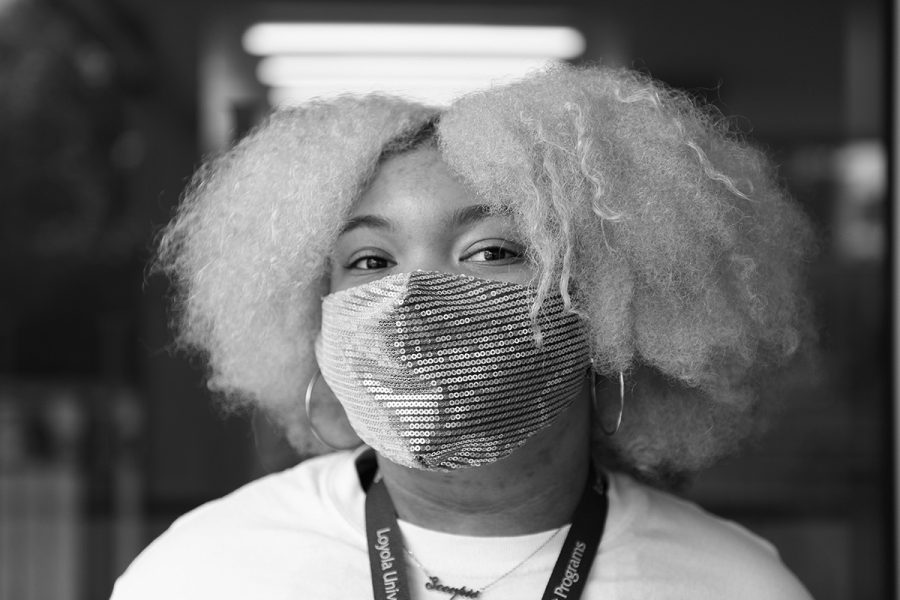 A Loyola student shows off a sequin face mask during the COVID-19 pandmic. Loyola has started a photo and video campaign called "This is Why We Mask," aimed at telling the stories of why community members wear masks and encouraging others to do the same. Courtesy of Kyle Encar. Photo credit: Kyle Encar

At Loyola, face masks aren’t just a mandatory practice or a fashion statement; they’re also symbols of kindness and concern for others in the midst of the COVID-19 pandemic.

The Office of Marketing and Communications is encouraging the community to wear their masks on campus by getting people to participate in its “This is Why We Mask” campaign.

Students, faculty and staff can participate in this campaign by sending a photo or video of themselves wearing a mask with a caption explaining why they wear one. Their photos may be featured on the university’s social media pages and in the virtual newsletter Heart of the Pack. The purpose of the campaign is to remind the community to follow the health and safety guidelines in a way that is fun and engaging.

“The best way to get people to understand and really empathize and really take action is by telling a story,” Angelique Dyer, social content producer, said.

Dyer came up with the idea in July, just one month before students, faculty and staff returned for the fall semester. The campaign launched in early September.

“We knew that returning back to campus in the fall was going to look and be completely different for our students, faculty and our staff,” Dyer said.

Dyer received a lot of stories from the community. She said that the people she reached out to had a lot of good reasons for wearing a mask, such as protecting their elderly parents, teaching kids at school, being an essential worker and observing the university’s Jesuit values.

“It’s not just coming from faculty and sort of talking to students about wearing a mask, but students as well encouraging their fellow classmates to wear a mask,” Dyer said. “It’s the right thing to keep everyone safe.”

Interim Chief Public Health Officer Lesli Harris was one of the many participants in the campaign. She said that she wears a mask so she can visit her mother who lives in Ohio.

“I have not seen her since March and I want to keep her and my extended family safe,” Harris said.

Dyer didn’t expect a large number of participants because of the constant reminders to wash their hands, stay six feet apart from others and wear a mask. While these reminders are important, she said that some people are experiencing “COVID-related health initiative fatigue.”

“Everyone’s kind of just like a little tired,” Dyer said.

Dyer said it was fun to see people get excited about the campaign.

“People love to tell their story, and people love to show off their faces and masks. Some people will even tag us in their [social media] posts if they bought a new mask and why they mask and things like that,” Dyer said. “I’m really excited that we’re able to sort of normalize this new, weird normal.”

University photographer Kyle Encar has helped out with the campaign by taking pictures of people wearing their masks. According to Dyer, Encar’s work is turning the campaign into a “beautiful art piece.”

According to Encar, wearing a face mask might become “common courtesy” in society, even when the coronavirus is under control.

“When you have a common cold or a cough— maybe even allergies— why not just wear a mask when you’re in public?” Encar said.

Dyer said that she hopes this campaign will help people think about “the greater world” and understand that wearing a mask isn’t just about protecting themselves but also the most vulnerable from the coronavirus.

“We’re not just in this world by ourselves,” Dyer said. “We’re in this world with others.” Dyer feels excited and grateful that this campaign will be a part of the university’s history.

“The stories that we told about why we did this is something that’s always going to be around,” Dyer said.