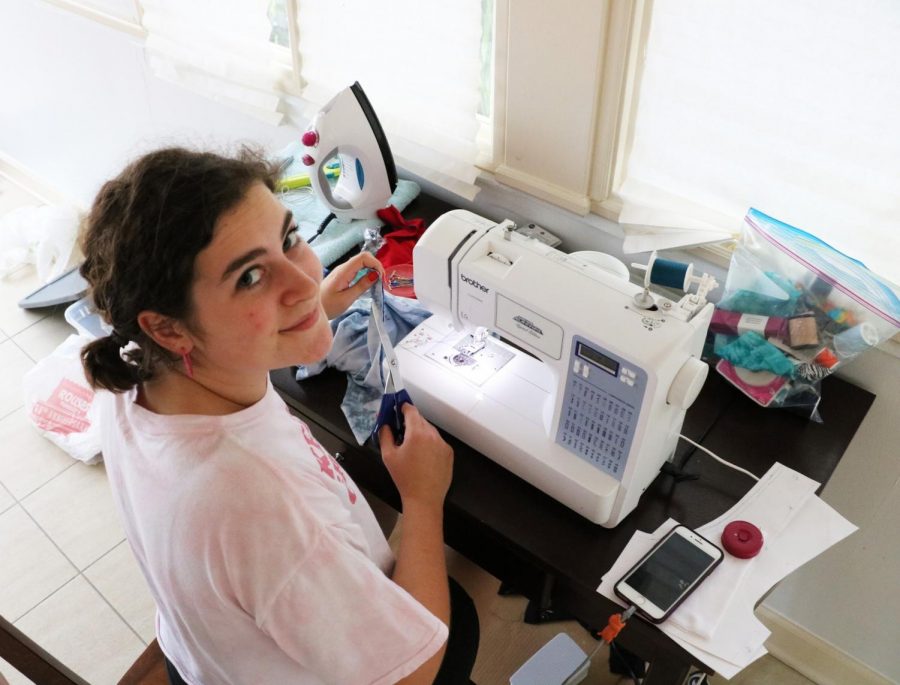 As COVID-19 cases surged through the country, anxiety and isolation set in for many people. The confusion and stress of what the virus really was and when it would end began to sink into society. Loyola graphic design senior Emilia Cicero wanted to help safely bring positivity to her community in the form of art.

“I realize that there’s a lot you can do, even if it feels like there’s not much you can do,” Cicero says.

Cicero now specializes in typography, hand lettering, and line work art. Cicero says she was lucky to be exposed to art from a young age and has had experiences in all forms of art growing up.

“My mom and grandma are artists but my mom did costumes for movies growing up. Anything that she was doing that was creative I was right there with her doing it too. When I was little I did painting, sewing and knitting. Literally any type of craft I probably have picked up or tried at least once,” says Cicero.

This summer, Cicero used her talents to help raise money for the Black Lives Matter movement.

“I wanted to be able to contribute from my house because I wasn’t comfortable going out to protests due to COVID-19. But I wanted to support the movement in any way I possibly could. I said ‘hey if you donate $10 or more I’ll do an illustration for you and donate the money’. I ended up raising over $500 from doing illustrations for people.”

Cicero says she hopes to inspire other designers to use their talents in support of a cause during these unprecedented times.

“If COVID-19 wouldn’t have happened, I don’t even know if I would have thought of something like that. All of the requirements of it having to be digital and something that people can post on social media were the result of the situation. I want to do it again in the future for another cause or maybe the same cause” says Cicero.

Cicero says her work has been inspired by nature and those natural factors have influenced the color palette of her artwork so far. Over the past few months, she says she has started to explore color more.

“I think for a while I was really focused on what color is my favorite but now I’m more focused on how am I going to better this design through color. I started out with more blues, greens, oranges and yellows. Now I’m starting to get more into pinks and purples. I just think it’s all up to the project,” says Cicero.

Cicero says that she believes color is the most important element of any piece of art. She has seen her work change as she’s learned more about light-color theory.

“I like that color speaks to your subconscious and can make you associate things with each other. One of my favorite things in design is talking about light-color theory and how fast food restaurants only use reds and yellows in their advertisements because it makes you think of food” Cicero says.

She says that she used to focus on what colors were her favorite but is now focused on how she is going to use color to express her message and not necessarily just choose color.

“When I’m designing, I design in black and white until the end. I go back and say ‘this needs to be blue because it’s associated with hospitals’. There’s so many different associations with one color. Even different shades of blue mean different things. When I think of turquoise, I think of the beach.”

Cicero’s favorite project to date was one she did for an animation class at Loyola.

“The Pangolin, which is not a well known species, is the most poached animal in the world. I love combining design with animation. I also love animals so anyway to tie those two together is really something that I wish I could do forever. I could have a job that makes infographics about random unknown animals. That’s really specific but I think it’s really fun.”

Cicero is not sure where she wants to take her career yet but she is happy she has many paths she can take.

“I would do something with motion design but I love print and illustration. The term ‘graphic designer’ is so broad that you can narrow it down into so many different subfields. That’s nice when studying graphic design because I get to work on a wider range of projects.”

Cicero says she is currently working on opening an Instagram shop that sells screen printed shirts with her designs.

“I’m working on that and a lot of random projects. In my free time I’m trying to work on dying fabric samples and figuring out what I want to do with that. I’m planting the seeds to eventually have a lot of freelance work in my portfolio.”

It’s not all work though. Emilia says that she makes sure to take time out for herself to keep her creative juices flowing.

“I make it a point to do personal projects to make sure that I also don’t lose my passion for design and don’t make it all about work. I think as a designer it’s important to have those little side projects that I’m actually interested in because eventually I want to turn that into something bigger.”

In her last few semesters at college, Cicero is trying to be present in her art.

“I’m really focused on graduating and I’m trying to figure out what I want to do after that. I think a big part of having any type of creative career is stumbling through it and finding your way after having multiple jobs” Cicero said.

Cicero says she is excited for her future and the changes it may bring.

“You always learn and experience new things. The industry is always changing too, especially because of technology. Something I really love about art is that I never feel like I’m stuck or like I have to do one thing forever” said Cicero.