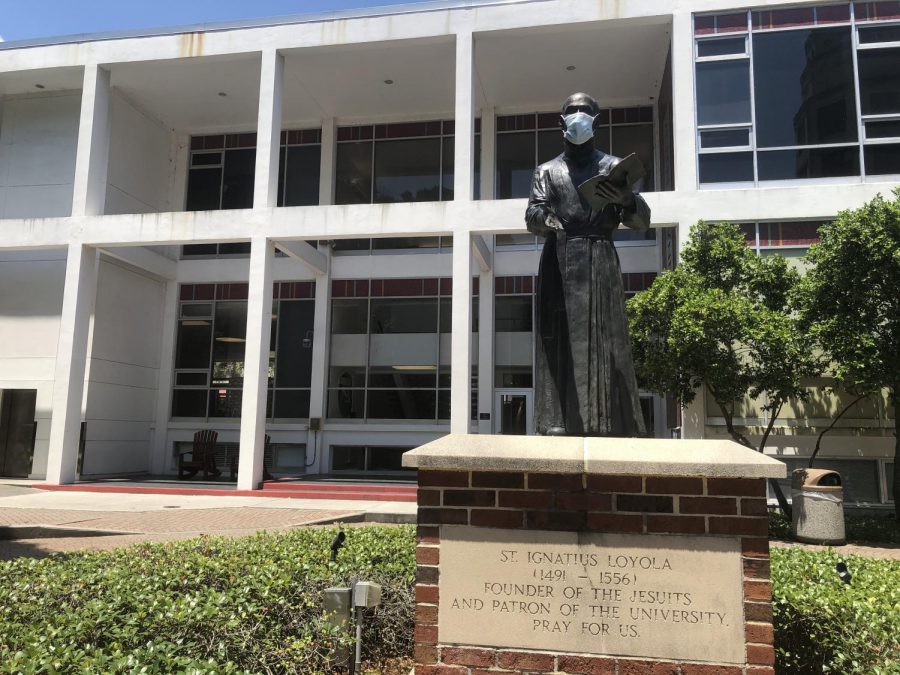 Loyola's statue of St. Ignatius stands outside of the Danna Center wearing a mask at the beginning of the fall semester. Loyola will be offering a January term of classes in 2021, focused on diversity and inclusion initiatives. Photo credit: Alexandria Whitten

In 2021, Loyola will be launching its first January term, a two-week period where students can take free three-credit classes that can count toward their spring transcripts.

Classes this January term will focus on diversity and inclusion topics and initiatives, according to Carol Ann MacGregor, senior director of institutional research and effectiveness and faculty development.

Loyola has decided to take a different approach than other universities on the classes made available during the term, using the classes to focus on social issues in America. MacGregor said that there will be a thematic focus this year on race, equity and inclusion. There will be courses ranging from the topics of criminal justice to English, MacGregor said.

“We want to cultivate a true representation of many different subject areas,” MacGregor said.

With the COVID-19 pandemic having affected many people’s finances this year, the university has decided to make every offered course free. MacGregor said she feels it is only right to give students a fair chance during such a hectic time.

MacGregor said many students have had to withdraw from classes because of “everything going on.”

“Everyone is working hard, but things may not have gone as planned 100% of the time,” MacGregor said.

The January term gives students a chance to catch up or get ahead on their graduation requirements, according to MacGregor.

In the past, the school hosted a May term that also offered three-credit classes in a condensed period of time. Organizers have decided to do things differently with the majority of classes during the January term being held virtually.

The university is imagining a lot of these classes to meet in the morning for lectures, then in the afternoon for students to work on group projects, documentary screenings, or in some courses, the time would allow for field trips, MacGregor said.

Carol Ann MacGregor said she asked Cheyenne Williams, SGA’s director of equity and inclusion, to be a part of the January term organizing committee. The committee started to meet throughout the summer but began crafting its plans during the fall semester, when they conducted intensive research for the term.

Williams said that after the many instances of racial hatred and violence that came to the forefront this past summer, she believes that this is the best time to put an emphasis on race and social justice in Loyola courses.

“Loyola did not want to enter the new year without acknowledging what happened over the summer with BLM and the many protests,” Williams said. “We want classes that represent Black people. By integrating (January term) into the beginning of the spring semester, we felt that this was the best way to achieve our goal.”

The goal is to have students learn about how Black people and people of color are affected in America.

“For example, if you enrolled in a business course, you may talk about how Black people need to start a business early so that they can create generational wealth,” Williams said. “If it is a psychology course, we would focus on systemic racism in the mental health system.”

January term is set to begin Jan. 4 and will end Jan. 15. The list of class offerings can be accessed via LORA on Nov. 16, the beginning of registration for the spring semester.