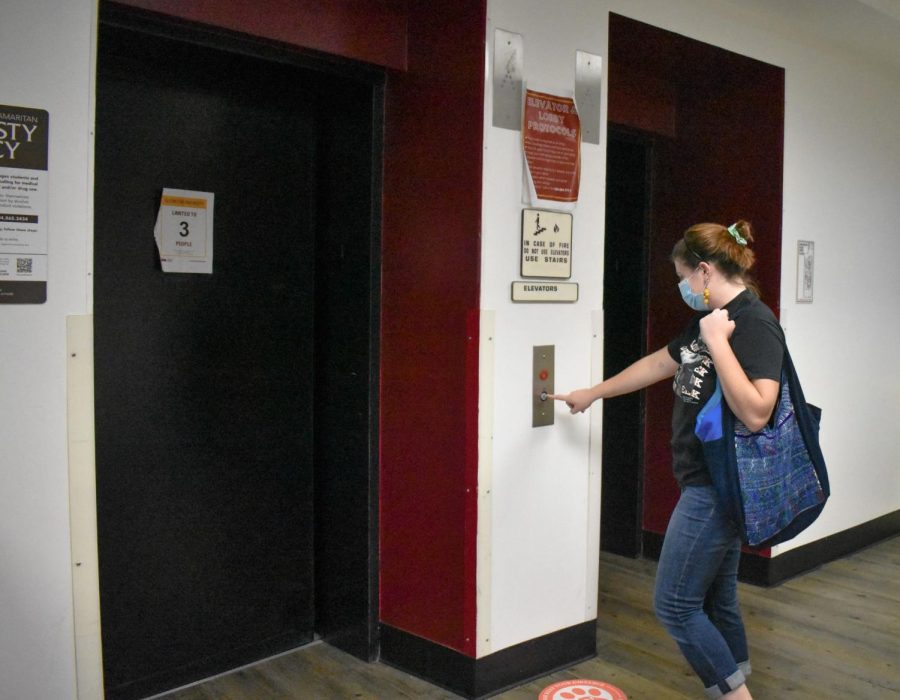 Earlier this month, students living in Carrollton Hall received an email from Blake Lewis, the Carrollton community director, that the university had decided to charge residents $5 each to pay for damages to the residence hall’s elevators and many students are not happy.

According to Chris Rice, the associate director of residential life, the university has had to fix elevators in Carrollton multiple times this semester. Rice told The Maroon in an email that the doors of both elevators in Carrollton Hall were kicked so hard that the door bent, broke internal mechanisms and caused both elevators to shut down. An elevator repair company was called to repair the damage and get the elevators running again, according to Rice.

Alexandra Zengel, criminology sophomore and one of the students charged with the fine, reached out to Lewis about her concerns after she received the email. She said she does not feel she should be fined for something she was not involved in.

Rice told Zengel in an email that the “community damage” policy within the residence contract states that residents are liable for any damage or loss occurring to the building, apartment, room, furniture and/or public spaces that is beyond ordinary wear and tear. The clause also states that if the individual or group responsible can not be identified then the damage becomes the shared responsibility of the residents.

On the community standards and policies section of the Loyola website, there is a section for elevators. The policy, however, does not state the “community damage” policy made available to Zengel via email from Rice. However, a two-part policy explaining “Vandalism” on the community standards and policies is very similar to the “community damage” clause quoted by Rice.

The section “Vandalism” states that residents will be held individually responsible for all acts of vandalism or damage to university property. Public area damage not attributed to individual students will be billed to all residents of the affected floor, wing or building, according to the policy.

Zengel told Rice that she would like substantial evidence of “improper use” being the cause of the elevator damages before she considers paying the fine.

“If you can not provide me with that evidence, you will not be receiving any money from me,” Zengel wrote in an email to Rice.

Lewis told students in an email that if the individuals who are responsible for the continued outages come forward or are reported, then this $5 charge will be taken off of residents’ accounts and only the students responsible will be charged.

“At this time we are not aware of the individuals who have vandalized the elevator. If anyone has information, please use this link,” Rice told the The Maroon.

Zengel told Lewis she believed that the fees students have to pay to live on campus should be enough to cover the damages.

Rice said that if Zengel would like to appeal this charge, she can submit a written letter of appeal to him and he will review it with the director of Residential Life.

Zengel said that she was not aware of the “community damage” clause before Rice sent it to her.

Jonelle Foye-Fernandez, a sophomore and resident of Carrollton Hall, said that he initially wasn’t upset about having to pay a fine.

“I wasn’t very upset until I sat down and thought about it,” Foye-Fernandez said. “After thinking, I was saying that this scenario isn’t fair at all.”

Foye-Fernandez doesn’t think he should have to pay anything because he didn’t break the elevator, but he isn’t confident that Loyola will find the students who did it.

“Given the amount of students that reside here, there’s no way of telling who is responsible,” Foye-Fernandez said.

Unlike Zengla, Foye-Fernandez said that he will pay the fine to the university.

“It’s only $5, so why not? My only concern is if ResLife continues to do this for each time the elevator breaks down, then that’s a problem,” Foye-Fernandez said.

Zengel said she again requested evidence that this damage is not normal and has been caused by the actions of students. Zengel said that without such proof, she feels asking students to pay the fine is “exploitative.”

“I think the fine that must be paid isn’t the best way of initiating an incentive for students, whoever is responsible, to stop damaging and defacing the elevators,” Foye-Fernandez said.