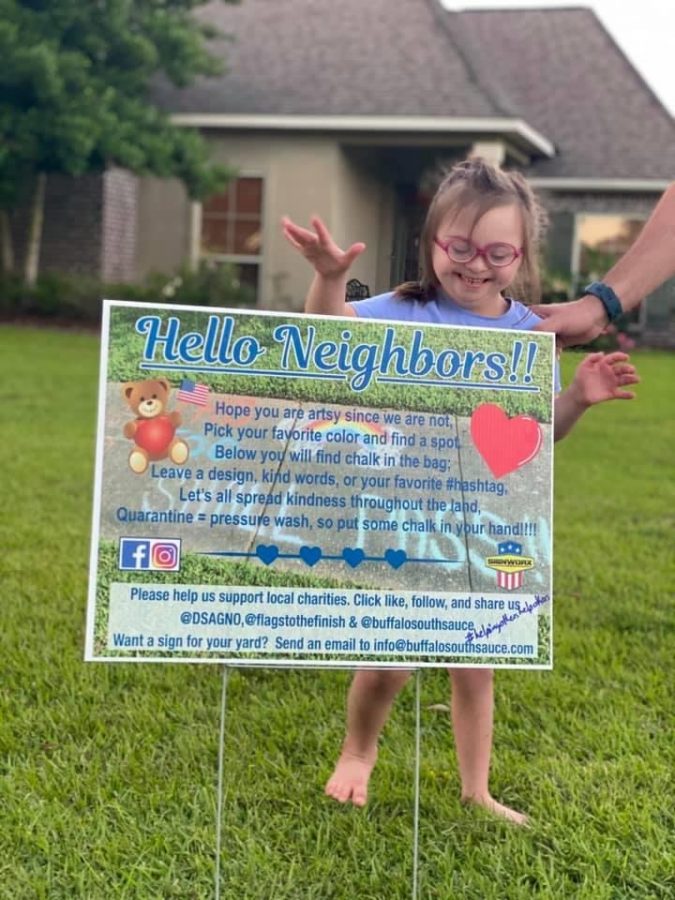 A little girl stands behind a sign with a poem on it asking people to leave a message in their neighborhood. Ryan Mast created these signs and took them all around southeast Louisiana to stay connected with the community. Courtesy of Ryan Mast.

Daily routines are important for everyone, and COVID-19 snatched all routines away.  Now, more and more people are trying to find their routine again, but there are some communities that still cannot put their routine back in place.

Those with intellectual and developmental disabilities are still struggling with finding their daily routine.

Kacie Hobson, MedCamps of Louisiana director, said that she does not even know if her campers are safe.

“They are still in their homes because if they catch COVID, it will not be good for them,” said Hobson.

She said that this created the struggle of keeping the campers involved with camp because there was no camp for them to look forward to this year.

“MedCamps is a happy place for them.  We give them something to look forward to, and the hardest part for me is not being able to do that for them,” said Hobson.

Hobson said that she misses interacting with the campers and that it is tough knowing that they are stuck at home.

“I can’t really help them at this point because it is not safe for me to see them either,” said Hobson.

Though she cannot help the campers right now, Hobson said that MedCamps is working to find a way to have camp this upcoming year, it is just in the air of what that will actually look like.

“There are going to be so many changes.  No group activities at camp, we are all going to be in certain little groups, and some camps just probably won’t happen,” said Hobson.

Having routines uprooted changed the way that Ryan Mast, a board member of the Down Syndrome Association for New Orleans interacted with the community.  He created signs with a poem on them and dropped them off with buckets of chalk all over southeast Louisiana.

“Dropping off signs was cool because now I can look at the kids and families through windows, but we don’t necessarily interact.  It brought a togetherness too, with the families and neighborhoods,” said Mast.

He said that dropping these signs was nice because before the pandemic hit, people would stop by his house all of the time, and this was giving him that sense of community again.

Mast said that he misses the little moments of joy and happiness you get as a community.

“It is very hard to not get a smile or a hug,” said Mast. “You get to know your people, and you become a family at the end of the day.”

Along with creating these signs, Mast created a buffalo sauce last August, “Buffalo South Sauce”, to raise money for the special needs community in New Orleans.

Kamy Alexander, Loyola ‘s Best Buddies chapter president and head coach for Loyola’s special Olympics swim team, said that it has been tough not having any in person meetings.

“I am really sad that we have not had any swim practices,” Said Alexander.

Alexander said that she will miss their matching party event which was a party that Best Buddies would host and just have every buddy in the organization come out and see each other.  This year the meeting will have to be virtual.

“I think I am just going to do break out rooms, which is anticlimactic but better than nothing,” said Alexander.

Alexander said that she wishes that they could see each other in person and not be in quarantine.

“I hated quarantine, so I know that they do too,” said Alexander.