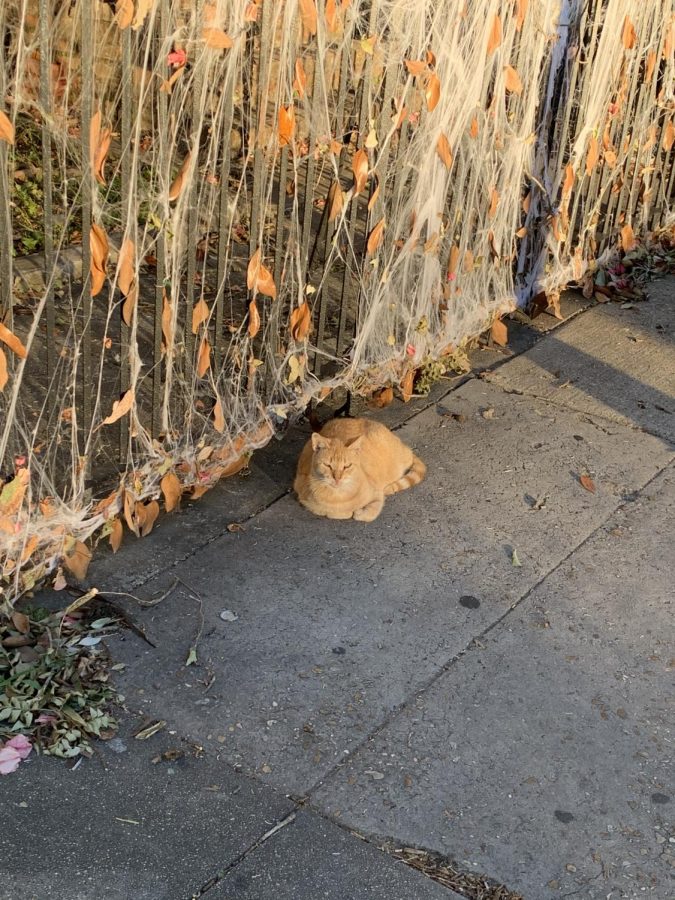 A cat chills out on a sidewalk on Maple Street on Nov. 2. Photo credit: Gracie Wise

Cats prowl the streets and corners of New Orleans. They hide in bushes and retreat under buildings. They go through dumpsters, scavenging for food. No matter where you go, you’ll find cats that have called the city their home.

There’s an estimate of 146 million cats living in the United States. Although most cats stay indoors, some live outdoors, making it easier for them to come and go as they please. Nearly half of them are feral or unowned.

According to the Humane Society of the United States, nearly two percent of the community cat population has been spayed or neutered.

Bob Thomas, director of the Center for Environmental Communication, warned against the overpopulation of community cats in urban areas.

“What do you think they’ve been doing while they’ve been gone? Well, they’re hooking up with other cats!” Thomas said.

The Humane Society said that female cats can become pregnant “as early as five months of age.” Despite 85% of household cats being spayed or neutered, most of them gave birth before undergoing the procedure.

There are plenty of reasons why so many cats flock to the city. For example, there are cats that hang out behind the Orleans Room, according to mass communications junior and Loyola’s People for Animal Welfare and Service project leader Andi Robinson.

“[Loyola and Tulane]” definitely do dump a lot of their foods,” Robinson said.

Ingram said that cats usually flock to areas with an adequate food supply. They usually hang out behind restaurants, dumpsters and convenience stores.

“It’s a lot easier to knock over a trash can or to have somebody leave out a plate of food,” Ingram said.

Cats are also attracted to bodies of moving water. Since Robinson lives by the Mississippi River, she sees plenty of cats in her neighborhood.

“There are unfortunately rats and mice in the area, so they like to eat them,” Robinson said.

Although outdoor cats are mainly harmless, there are repercussions.

Thomas warned that the overbreeding of feral cats is endangering other species, including lizards, insects, mice and birds.

This is a problem for him, especially since he is a bird feeder. Sometimes, he walks into his backyard to check on the birds, only to find a pile of feathers greeting him on the ground.

“Everytime I look out there and see a cat in the backyard, I shoo it away. It doesn’t matter – it’s gonna be back,” Thomas said.

Thomas said that humans are responsible for the breeding problem and need to come up with better ways on how to solve it.

The Louisiana Society for the Prevention of Cruelty to Animals explained that removing cats from their homes won’t help curb the feral population because of a phenomenon called the “vacuum effect,” meaning dozens of cats will flock to those areas once they’re vacated.

Ingram believes that the best way to keep the community cat population under control is for people to get their pet cats neutered or spayed.

“If you have an area like campus that doesn’t have a TNR program or a large feral cat colony, they’re just going to keep staying there,” Ingram said. “They’re gonna keep mating, multiplying and just staying there, and the problem gets worse and worse.”

SPCA has a Trap-Neuter-Release program that helps keep the number of feral and stray cats from growing. They use traps to catch the cats, send them to a veterinarian to be spayed or neutered, vaccinated and ear tipped, and they return them to their homes. It is considered to be the most humane method for controlling the cat population.

Zeus’ Rescues also has a spay/neuter program where they set traps to capture the mother and send them to the shelter to undergo the procedure, according to Ingram. Afterwards, they look after the kittens that are left behind.

Ingram said that the number of cats being born would be under control if there was more funding for spay/neuter programs.

“If we have an aggressive spay/neuter program that is affordable and easy for people to do, we would reduce the population of unwanted cats on the streets immediately,” Ingram said.

Thomas thinks that if more people took better care of their cats, it wouldn’t be such a problem.

“I’m in favor of people controlling their animals in their own homes,” Thomas said.

Cat traps are available on the Louisiana SPCA’s website. They should also call to make a spay/neuter appointment at the Community Clinic after they catch one.

“I really wish we could get the cats and take care of them and find a home for them,” Robinson said.