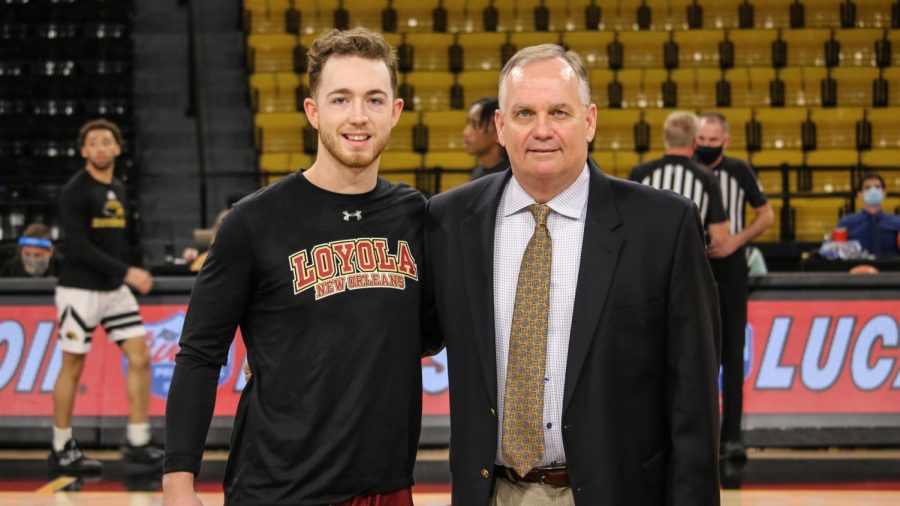 Luke (left) and Jay (right) Ladner pose before the Loyola vs Southern Miss exhibition basketball game on December 28, 2020. The game marked the first time the two Ladner's had ever competed against each other. Photo Courtesy of Southern Mississippi Athletics.

While the Dec. 28 men’s basketball game between Loyola University New Orleans and the University of Southern Mississippi was only an exhibition contest, it meant so much more to two of its participants.

On one side of the court was Wolf Pack sophomore guard Luke Ladner, while on the other side was his father Jay Ladner, head coach of the Golden Eagles’ men’s basketball team.

“In all my years playing basketball I have not played for my dad or against him,” said Luke.

Even though the Wolf Pack fell to the Golden Eagles 54-74, Luke said that there would be no hard feelings between him and his father. They both mentioned that they have a good father-son relationship.

“We’ve talked about this game. We have a good relationship, so there won’t be any hard feelings. At the end of the game someone has to win and someone has to lose,” Luke said.

“It’s one of those situations where I didn’t feel good about it either way. My job here is to prepare our team to win, Luke’s is also preparing to win,” said Jay. “It’s gratifying and inspiring how hard he works at whatever is in front of him.”

Going into this game, Luke also said there was no added pressure on him to perform well in front of his dad. Luke played 18 minutes in the game and made one 3-pointer right in front of the Golden Eagles’ bench, although no one could see his father’s reaction.

“He was right in front of me when he made that shot. My mask was covering up some concern (when Luke made his 3-pointer in front of Southern Miss’ bench),” Jay said.

Playing against his dad’s team, Luke had some conflicting emotions.

“It’s mixed feelings for me. It’s a once-in-a-lifetime opportunity to play my dad,” said Luke.

While Loyola was on a month-long break, Southern Miss remained open and Jay was still able to operate with the team. During the break Luke was allowed to be with the Golden Eagles working out, shooting, and watching them practice.

Jay said there were a “lot of good-natured jabs at each other prior to the game.”

“I have great respect for Coach Hollowell and their program. I had some coaches ask me why are we playing this team, they can beat us,” Jay said with a chuckle.

Luke said his father has given him a lot of good advice about more than just the game of basketball, but the best thing he remembers is his dad’s favorite saying.