“The Tide’s Turning” for student visual artist and filmmaker 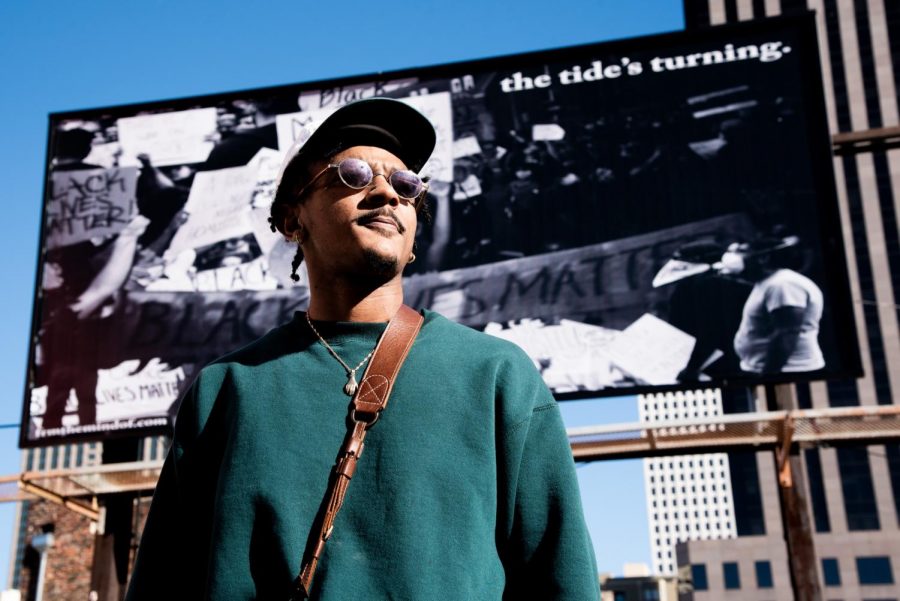 Troy Pierre II poses in front of a billboard featuring his original art near the corner of Loyola Ave. and Poydras St in the Central Business District. The piece was created following demonstrations in New Orleans connected to the Black Lives Matter movement. Photo credit: Michael Bauer

Digital filmmaking senior Troy Pierre II initiated alignment with his creative field at a young age. Now, his latest work “The Tide’s Turning” stands on a billboard on the corner of Loyola Avenue and Poydras Street.

The piece is a collage of nine photographs captured through a recent film of Pierre’s that expresses the frustration millions felt worldwide this summer as they watched the lives of George Floyd and Breonna Taylor be taken for senseless reasons.

Pierre captured the images highlighted within the work while protesting the racism against Black Americans in New Orleans. He felt this emotion firsthand when one of his friends was treated inhumanely during a traffic stop.

The protests also inspired Pierre as he began to construct his film “The Reckoning” as he finished completing the artwork “The Tide’s Turning.” Produced in the style of a satirical commentary piece, it will be a monologue short film which will form part of his senior thesis.

“We are in an economic depression (where) you go outside without a mask and could potentially die. Additionally, while we were all supposed to be inside on one accord regarding our health and safety, Black people are being murdered,” Pierre said. “Following this, the murderers justify their actions by attempting to paint the victim as a bad person based on their past due to their skin color.”

Pierre grew tired of watching the continuous news coverage and needed a release. At first, he was hesitant to go to a protest due to him living with his family and not wanting to contract COVID-19. However, he still walked amongst hundreds of other protesters across the I-10 bridge advocating for Black lives.

Despite the popularity of social media as a platform for showcasing art, Pierre believed the billboard approach was best.

“I want the community to engage with it and take pictures, whether it’s with it or of it,” Pierre said. “I just want people to see it. I was aiming to get it into a gallery or exhibit. However, around that time, they were not accepting art due to COVID-19.”

The billboard’s photography is also available for purchase on his website where 30% of the profits will be redistributed to the New Orleans community.

Pierre shared that the courses within Loyola’s film program contributed to the foundation of his skills.

“I am learning that it’s about the people you create and brainstorm with that helps define you and your style,” Pierre said. “Being an independent creative, it’s important to outsource in areas that may not be your strong suit.”

As a director, he continuously matriculates his passion by teaching himself specific techniques and finding his community.

“I don’t have anything specifically that I want people to take. “The Reckoning” is going to be something that people either love and resonate with or contest. I really just want people to watch it and soak it up,” Pierre said.

On Jan. 25, Pierre exhibited photography and film showcasing New Orleanian culture in the Master and Motion gallery at the Louisiana Art Museum.

He was excited to share this experience with his sister Alexis, whose work was displayed there as well.