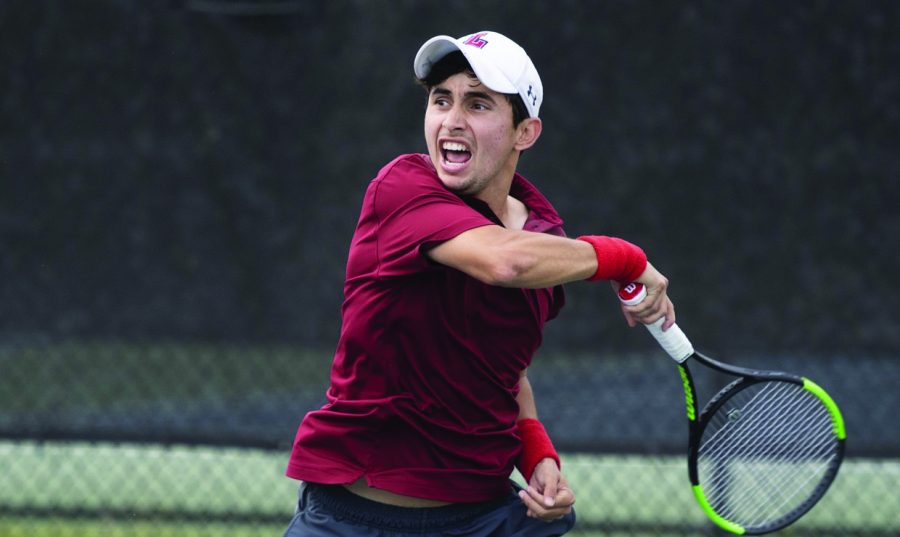 Men’s tennis player Ernesto Telles battles in a match against Jackson State Jan. 25 2020. Loyola's men's and women's tennis teams are working towards earning a trip to the NAIA National Championships this spring.

While the majority of Loyola’s sports have had to get creative and adapt to new ways of practicing, conditioning and competing due to COVID-19 safety protocols, Wolf Pack tennis has remained relatively “normal.”

Despite the ongoing pandemic, Loyola’s men’s and women’s tennis teams were able to take the court four times during the fall semester.

“Practices are pretty normal. It’s the transportation, getting back and forth, that can get complicated at times to adhere to protocols,” said Matthew Llewellyn, Loyola’s head tennis coach.

Even though Llewellyn is in his second season of working at Loyola, he said he feels as if he has not even coached a season because of COVID-19 setbacks. Llewellyn was hired late in November 2019, which put him behind schedule in the recruiting process for the 2021 recruiting class. He was happy he could still meet and spend time with all of the recruits, but one.

“I was excited knowing what we were going to have to work with for 2021. We’ve seen it come to fruition. Our freshmen have done really well,” said Llewellyn.

Both teams used their fall outings to prepare for the upcoming season. For many players, the competitions they had in the fall were the first real matches they had played in months. The men’s team started their season on Sept.16 and the women’s team followed two weeks later.

“I think we did really well, adapting and continuing to practice and do our best on the court,” junior Samuel Marin said about the fall men’s season.

Marin, a digital filmmaking major, was one of two Loyola men to be a finalist at the 2020 Intercollegiate Tennis Association NAIA Gulf Regional Championship.

After a couple of competitions in the fall, Llewellyn said he was impressed with his players, especially his freshmen. One standout freshman is Lucy Carpenter, who Llewellyn coached in New York before she came to Loyola.

Carpenter ranked eighth in the Oracle ITA NAIA Women’s National Singles Rankings after just her first semester with the Wolf Pack. Loyola has never had a woman tennis player rank in the Top 10.

“I feel really proud to represent my team like that and Loyola as a whole,” said Carpenter.

Carpenter also put her name in Loyola’s history book by becoming the first Loyola tennis player to compete at the ITA Cup tournament.

“It’s exciting knowing we have one of the best players in the country on our team,” Llewellyn said.

With a successful fall semester behind them, there is only one goal in mind for both teams for this upcoming semester.

“Our main goal is to go to nationals. We have tough competition with nationally ranked teams in our conference,” Llewellyn said.

“Winning our conference as a team and making it to nationals would be super awesome,” Carpenter said.

The Loyola men’s tennis team has never been nationally ranked, but Llewellyn and Marin think that’ll change this year.

“I’m confident in the team we have. Everybody is ready and has that goal in mind,” Marin said.

“They’re trending that way to be nationally ranked,” Llewellyn said.

The Wolf Pack has some competition being a part of the SSAC. The men’s and women’s teams at Middle Georgia State University and William Carey University have both been ranked in the Top 10 for the past two seasons.

The men and women will kick off their spring season on Jan. 31 versus Nicholls State.

“We know what we have to do, but this year especially it’s important to check on everybody,” said Marin.

“I’m mostly focusing on my first season as a freshman being a good teammate,” Carpenter said was one of her goals for the season.

Members of both tennis teams said they are grateful they have been able to play, and they hope they are able to play every match on the calendar for the spring. They want to give back to Wolf Pack athletics for all that they have done to keep them safe and able to play.