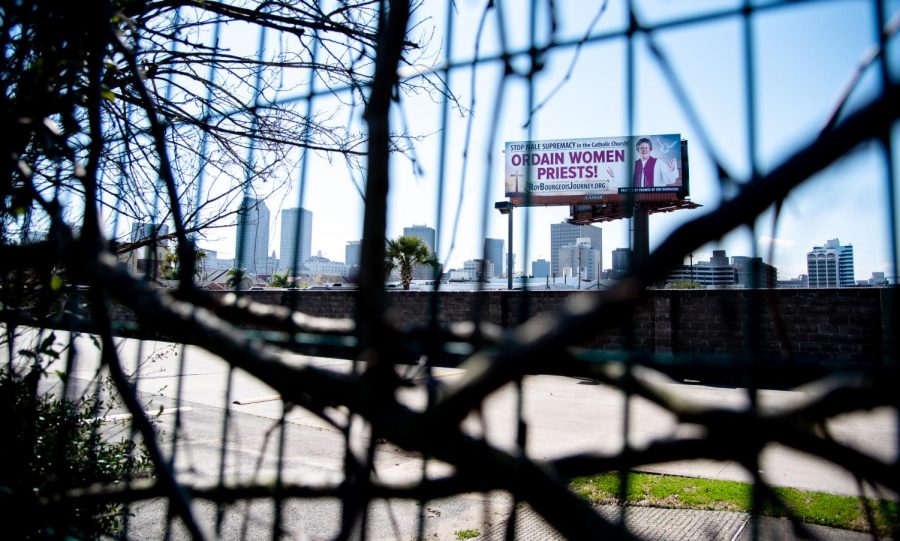 A billboard funded by Roy Bourgeois calling for the ordination of women priests stands in front of downtown New Orleans. Bourgeois was expelled from the priesthood for his advocacy of ordaining women. Photo credit: Michael Bauer

Roy Bourgeois, the founder of School of Americas Watch, has funded two billboards in New Orleans to promote the ordination of women in the Catholic Church. While the billboards have only been up for a couple of months, the argument surrounding women ordination has been going on for decades.

Bourgeois, served in the Maryknoll order of priests for nearly 40 years and was laicized, or stripped of his role as a priest, because of his vocal support for women’s ordination. He became involved in the movement after some women approached him, saying they had felt the calling to become priests and felt it was wrong that they could not.

“They said, ‘We have to talk with you,’” Bourgeois said. “‘We have to talk to you about an injustice in our church, the Catholic Church. I, as a woman, am also called, like you as a man, to the priesthood.’”

There are women who have gone through the ordination process, explained Jennifer Molina, the New Orleans contact for the Women’s Ordination Conference.

“Women Catholic priests are already here,” she said. “They’re not recognized by the Vatican, but they are Catholic women who have been ordained.”

It was after Bourgeois gave the homily for the ordination ceremony of one of these women, Reverend Janice Sevre-Duszynska, that he was told he would be laicized unless he publicly recanted his support of women’s ordination. He refused, and was expelled from the priesthood in 2012.

The Church’s official standing is that women cannot be priests, but can serve as nuns, religious sisters or abbesses. It was officially reiterated in 1991 by Pope John Paul II, and the Archdiocese of New Orleans further supported that stance in a statement to The Maroon.

“The Catechism of the Church states, ‘The Lord chose men to form the college of the twelve apostles, and the apostles did the same when they chose collaborators to succeed them in their ministry,’” the statement said, citing paragraph 1577 of the Catechism. “‘The Church recognizes herself to be bound by this choice made by the Lord himself. For this reason the ordination of women is not possible.’”

Nathan O’Halloran, S.J, director of the Catholic Studies program, broke down what that meant.

“Our job as the Church—this is what the Magistarian says— is simply to safeguard Jesus’s teaching,” O’Halloran explained. “If we think that this was the intention of Jesus, we have no authority, even the Pope, to change that.”

This is where Bourgeois disagreed, saying that God made men and women of “equal worth and dignity.” He believes the root of the issue lies in a power dynamic.

The Archdiocese of New Orleans rejected this idea.

“Through the centuries women have played an important role in the ministry of the church,” the statement from the Archdiocese read. “This has increased significantly in recent years both in the local church and in the Vatican…Today, the church is enriched by the ministry of women, both religious and lay, who use their gifts and talents to support the ministry of church parishes, schools, and other vital ministries in service to the people of God.”

Molina supported Bourgeois, saying that she feels the lack of women priests is bigger than the Catholic church.

“It sends a message that women are inferior, that for some reason we are not worthy of that role,” said Molina.

That is why Bourgeois decided to put “Stop Male Supremacy in the Catholic Church” on the billboards. These boards were commissioned at the start of the pandemic, when it became unsafe to gather for in-person protests or talks.

“It’s an educational tool, it’s an organizing tool and it’s trying to help raise the temperature on this issue,”said William Quigley, professor of law and former director of the Loyola law clinic and the Gillis Long Poverty Law Center, at Loyola, who became active in the push for women’s ordination after meeting Sevre-Duszynska.

While Bourgeois funded the two billboards in New Orleans, Molina has been able to raise about $4,900 to get more billboards put up across the country to keep the dialogue about women’s ordination going.

“People are going to look back and say ‘How could the people in 2021 have thought that this was acceptable and not insisted that it be changed to become more just and equitable?’” said Quigley.