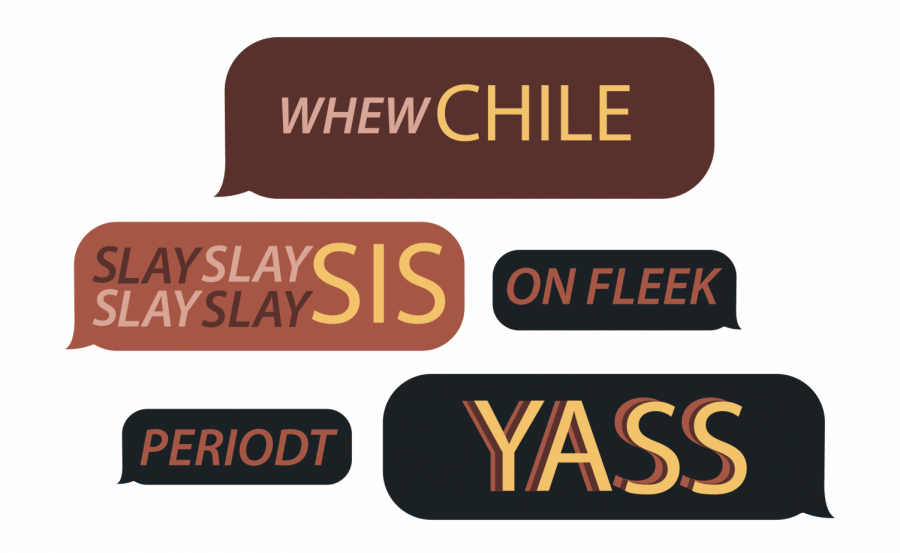 Pop culture’s mass usage of African-American English has diffused the language from the Black community into the general American public, raising questions about this appropriation and its impacts.

This form of English has been around in America for centuries and didn’t begin with slang used nowadays such as “Whew, Chile,” “Yass honey,” and “slay.” But today, this cherished form of expression and these phrases are used in pop culture and on mainstream platforms such as TikTok and other social media by many people who are not Black or of African-American descent.

Jemima Brady, a senior sociology major, said she has witnessed non-people of color use African-American English language in conversation insincerely.

“I feel caricatured. Like when they use this language they just gained knowledge on social media platforms when speaking to me, I feel like they aren’t talking to me. They see Black,” Brady said. “When it’s coming out of their mouths they’re not being authentic to themselves, It’s something they saw on social media, TikTok or TV, and they’re not understanding the context behind what they are saying.”

Renée Blake, an associate professor in the Departments of Linguistics and Social & Cultural Analysis at New York University, said that she categorizes this language under the term “African-American English” and feels it should not be labeled as vernacular due to this title indicating that the language is informal, a common stereotype about Black culture in the first place. She said she identifies it as a dialect of English with, “its own set of rules.”

Blake said Black culture in the U.S. has for generations been stolen and continues to be, especially when it comes to language, on a massive scale due to social media.

“African-Americans and Black folks of the United States have carried the cultural capital of this nation since we got here. Think about the ways our culture is exported as well as appropriated around the world. Just by the mere fact that it’s created by Black people, it’s being made mainstream,” She said.

Black people in the United States are placed in positions of discomfort when they enter work environments or the classrooms of academic institutions. They may feel that code-switching is needed to be respected and heard in these spaces. Code-switching involves, “adjusting one’s style of speech, appearance, behavior and expression in ways that will optimize the comfort of others in exchange for fair treatment, quality service and employment opportunities,” according to a report by Harvard Business Review.

“Depending on the first two minutes of a conversation, I will know which form of communication I feel comfortable speaking to them with. I know if they’re saying certain things to me because I’m Black and that’s unacceptable. I am never afraid to be myself, I’m just cautious.” Upshaw shared.

Blake said she feels that it’s OK for non-Black people to use African-American English language. However, they must honor certain boundaries.

“They’re putting us on as a form of linguistic Black face and making us feel really uncomfortable. What Black folks are saying is that you can use it, don’t use it. Recognize when you’re using it, it’s coming from a particular group and a particular history and a particular kind of expression and accept us in that,” Blake said.

To ensure Black voices are no longer marginalized through the appropriation of their language, Blake said education is key.

“It’s through trying to educate people on belonging and acceptance. With discussions of history that’s an education of linguistic systems. We have to do work in our communities to teach Black people that they’re not speaking broken English or bad English but rather speaking a dialect of English that has a historical grounding,” Blake said

Despite the mass usage of African-American English in popular culture and by people of various races, certain stereotypes are still associated with people of color speaking this way in public. They are often labeled as ghetto, ratchet or uneducated.

“If someone were to correct me, I tell them I am college-educated. I know how to speak. English is my first language! So don’t tell me how I should pronounce words when I am sharing my thoughts. Even my parents struggle with this. I feel that people view it ultimately as unprofessional due to a unique form of a language being presented to them,” said Mia Upshaw.