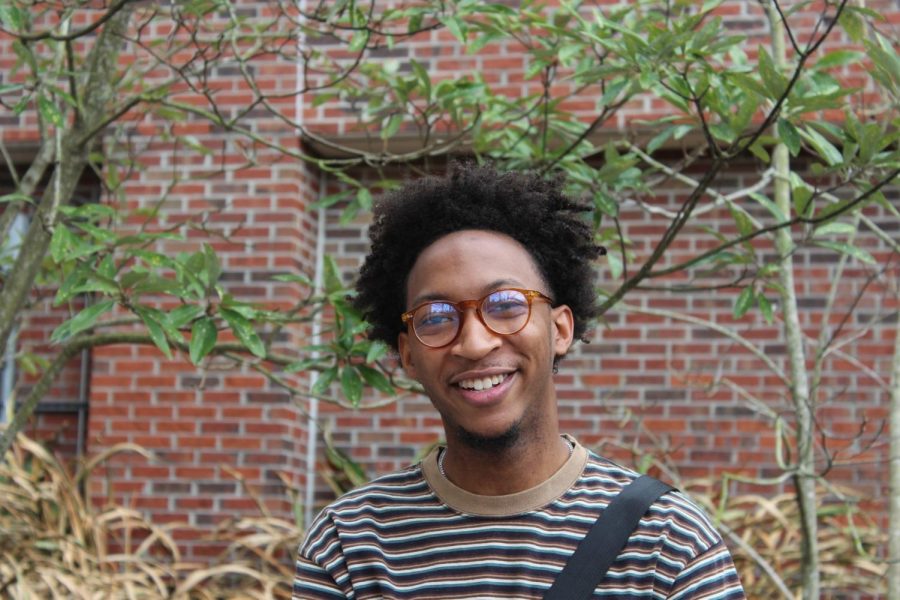 Despite his involvement in professional organizations, SGA Vice President Zontré City said mostly he loves seeing the people he loves laugh. He also loves watching a good movie, finishing a task and feeling like he positively affected someone’s day.

City, a filmmaking major from Nashville, said he loves to spend his time as a fellow with the T. Howard Foundation and American Black Film Festival’s Greenlighters Academy. City has also participated in Harvard’s Virtual Venture in Management and the Forbes Under 30 Scholars Program, he said.

City said he loves completing something and has worked to do just that through SGA.

Within the organization, he said he’s been proud of the work of the senate in creating change this semester, such as advocating for mental health days, earlier syllabus requirements and making course evaluations more accessible on LORA.

“I am only as strong as the senate body,” he said.

Despite his work creating change with SGA’s senate, City said he was really hard on himself last semester. He realized he “needed to pivot and readjust priorities,” and he decided to work on legacy building instead.

As vice president of SGA, a member of the Rho Epsilon Chapter of Alpha Phi Alpha Fraternity, Inc. and as one of the founders of Loyola’s homecoming, City’s goal is to “give back to Loyola in the way it’s given to me.”

In his moves toward building a legacy, City said he has given SGA senators more responsibility, has worked to keep his fraternity chapter alive and is continuing to organize this year’s homecoming.

In his time at Loyola, City said he has helped spark conversation about change through SGA. Loyola is a campus for the people, according to City, but he believes that it is a campus that the people should be able to criticize. With SGA, he believes change can be made in response to these criticisms.

“Why would I sit on the outside when I can do it?” City said.

This year, he said he has been focusing on COVID testing and he’s been an advocate for students through SGA along with the help of the senate.

City’s can-do attitude has made an impact on those he’s worked with at Loyola, according to SGA President Freedom Richardson.

“It’s been nothing short of amazing to work alongside Zontré to tackle some of the most pressing problems facing our campus,” Richardson said.

In their time at Loyola, Richardson and City have bonded through working together in SGA and as fraternity brothers and are now close friends and roommates.

“He radiates genuineness and enthusiasm, which constantly challenges me to be my most on-game and engaged self,” Richardson said.

To keep his fraternity chapter alive, City said they’re hoping to attract individuals with a heart in search of brotherhood, service and a love of mankind.

Rho Epsilon was named Louisiana District’s College Chapter of the Year. After City and his fraternity brothers graduate this year, he said he’s hoping the chapter will keep up the good work.

City worked to found both homecoming and Lemon Pepper in his years at Loyola. Michaela Jones, Lemon Pepper’s former Director of Internal Affairs, said City was the mastermind behind the organization.

Lemon Pepper is a Loyola organization that gives marginalized students a space to discuss the realities of the outside world. The group has conversations ranging from debates about whether Canes or Zaxby’s chicken is superior to the ramifications of cancel culture, according to City.

Regardless of the topic of conversation, “Zontré has a great ability to bring people together and to play into everyone’s strengths,” Jones said.

Beyond Loyola, City hopes to continue to mentor and follow his instincts.

“The pandemic taught me to think more about my passions and what drives me,” he said.

City has continued to pursue his passions in internships with the New Orleans Film Society and HBO Max. Even in his last semester at Loyola, he has taken on an internship with BET as its Unscripted program intern, taking notes on test screenings, logging show submissions and even making notes on episode cuts, according to City.

City is unsure where he’ll end up in the future, though his internships are a jumping off point, he said.

“I want to amplify the voices of marginalized groups, wherever that takes me,” City said.

City’s time at Loyola will come to an end in May, but he said it’s been a blessing he never imagined.

“It’s been a crazy four years,” City said. “I charge others to make the most of your Loyola experience and enjoy the moments that you have.”