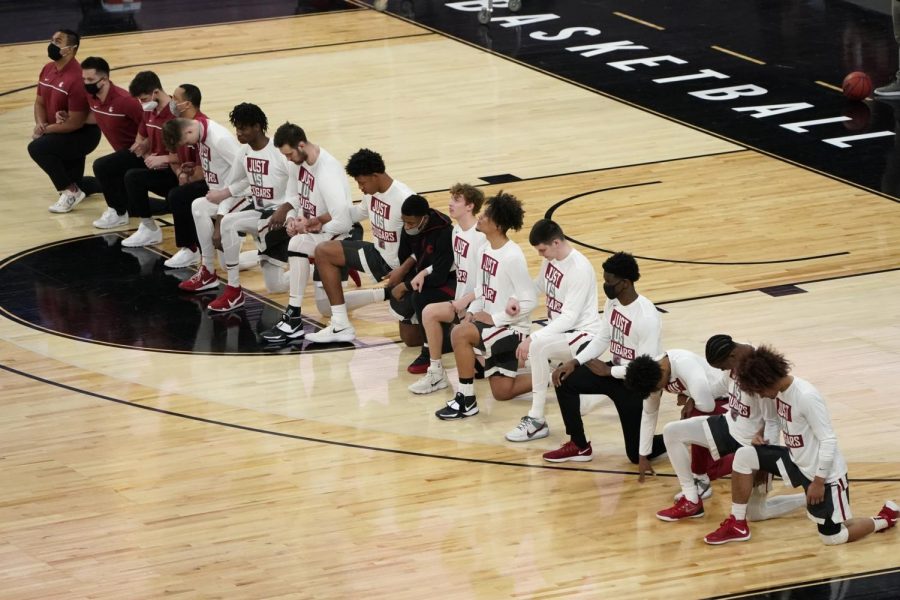 Washington State players kneel during the national anthem before an NCAA college basketball game against Arizona State in the first round of the Pac-12 men's tournament Wednesday, March 10, 2021, in Las Vegas. (AP Photo/John Locher)

I write to comment on Andrew Lang’s piece, “Stop playing the national anthem at every sporting event.”

We need to normalize not feeling proud of our countries all the time and stop labeling people who decide not to sing the national anthem as unpatriotic. Patriotism is the act of supporting your country, and one of the best ways to do so is acknowledging when it has committed a wrong. It is those who are committed to fighting for what is right that one should be most proud of.

I disagree that the overuse of a national anthem devalues it. If you think that playing a national anthem at every single event is too much, imagine having two, the Puerto Rican and the American. However, the national anthem in Puerto Rico is valued so much that no one dares to clap after it’s played as an act of respect. In the Dominican Republic, the anthem is transmitted three times a day on the radio.

It’s important to understand why we’re having this conversation. The Dallas Mavericks decided not to play the national anthem. What’s even more important is the reason why.

“In listening to the community, there were quite a few people who voiced their concerns, really their fears that the national anthem did not fully represent them, that their voices were not being heard,” said Mark Cuban, owner of the Mavericks.

The fact that enough people don’t feel represented in the national anthem that executives decided not to play it says a lot of this nation’s current environment, a country known for its patriotism. In fact, a recent Gallup poll showed that only 42% of adults are extremely proud to be American, the lowest number since the measurement started in 2001.

As Lang said, the goal of playing the national anthem is to feel national pride. Pride is defined as a feeling of being pleased or satisfied that you get when you or people who are connected with you have done something well or own something that other people admire. Many Americans are unsatisfied with their nation right now, and that’s ok. It doesn’t make them less patriotic, it doesn’t make them less American. Loving your country doesn’t mean you have to be proud of it all the time.