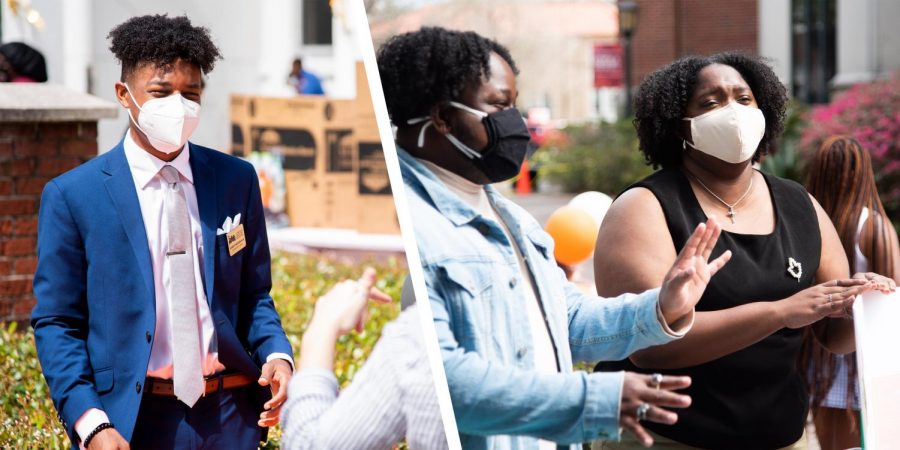 Deon Wilson and Robert Morrison campaign at the SGA meet and greet event in the Peace Quad on March 8, 2021. Wilson and Morrison are running on similar campaigns, and both bring significant student government experience. Photo credit: Michael Bauer

SGA campaign season is well under way, and who you vote for will affect the policy and culture of Loyola for the next year. Our Student Government Association president and vice president play an important role in shaping the student experience at Loyola and we at The Maroon had the opportunity to sit down with representatives of all three presidential/vice presidential tickets to learn about their campaigns and visions for Loyola. We want to help ensure that voters are as educated as possible when it comes time to vote, so here are our assessments of the three tickets.

One ticket is made up of two freshmen, Christian Martinez and Aidan Gibson. While we admire their ambition, it’s clear that they’re not ready to take on such important roles. Not only did Martinez make racially insensitive comments equating racial identities with being “half-squirrel” during our on-the-record interview, but one of their primary platforms includes a promise to advocate for more late-night dining at Loyola when neither candidate has spoken to any Sodexo representative about whether this is something the school would be open to or something Loyola is capable of executing. A campaign should be built on research and awareness. Perhaps with time and experience, Martinez and Gibson will become the leaders Loyola needs, but they’re not there yet.

Our attention, then, shifts to the other two tickets: Robert Morrison and Angelyss Vasquez, and Deon Wilson and Tyler Sanchez. Both of these tickets bring a lot to the table: experience within and outside of SGA, dedication, and clear plans for Loyola. We at The Maroon believe that you can’t go wrong voting for either ticket.

Both want to focus on SGA transparency and have multiple policy proposals to do so, including launching an SGA website. Both have plans to provide free textbook opportunities to students. Both want to foster equity and inclusion on campus through initiatives such as working with Kedrick Perry to create the new Multicultural Center on campus. In fact, their platforms are nearly identical. But the differences are in the details.

While the Wilson/Sanchez ticket plans to create an ad hoc committee made up of non-SGA students and a health official to discuss life during COVID at Loyola as well as bring back the old SGA senate sustainability committee, the Morrison/Vasquez ticket has proposed a committee of non-SGA students that will discuss how students feel about the organization and its policy impacts. It’s these sort of granular policies that students have to decide between, on top of the experience and leadership styles of the candidates themselves. Wilson and Sanchez are both juniors each with three years of SGA experience under their belt both within the University Programming Board and the Court of Review respectively. Morrison has spent the past two years directly involved with the SGA senate and policymaking while Vasquez has experience leading student organizations such as the Multicultural Leadership Council.

Both the Wilson/Sanchez ticket and the Morrison/Vasquez ticket are great options, and The Maroon endorses them both. We trust that students will cast their ballots thoughtfully. Whoever wins, we look forward to a bright future with them leading SGA.