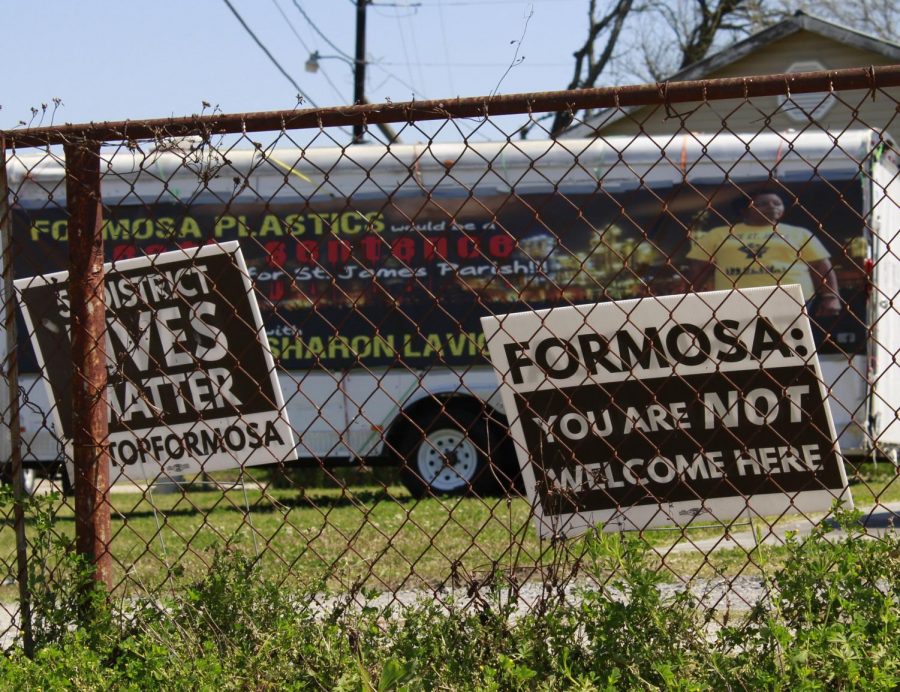 Signs and a trailer from RISE St. James sit in front of a house. The environmental group has been protesting the construction of 14-plant chemical complex Formosa plastics. Photo credit: Rae Walberg

In 2016, Sharon Lavigne was diagnosed with Autoimmune Hepatitis. Lavigne noticed an uptick of chemical plants moving into her home of St. James Parish as well as neighbors being diagnosed with cancer, but she said at the time, she did not correlate health with industrial pollutants.

ProPublica’s analysis of data from the Environmental Protection Agency found that the air in St. James, Louisiana is estimated to be 61.7% more toxic with cancer-causing particles than the other Mississippi River parishes between Baton Rouge and St. Charles. While the analysis said that no scientific studies have proved the link between industrial pollutants and cancer, it said that the state’s data “does not rule out such an association either.”

It wasn’t until Governor John Bel Edwards approved the arrival of a new petrochemical complex in 2018 in her parish that Lavigne said her “eyes were opened.”

“When I realized all of this was going on, this is when I decided to speak to God,” Lavigne said. “I asked him what I to do and that’s when he told me to fight and that’s when I formed an organization.”

To Lavigne, the existence of Formosa Plastics’ $9.4 billion 14-plant chemical complex known as The Sunshine Project would mean a morbid future for St. James residents.

“I feel we are going to die, that’s the way I feel,” Lavigne said. “We are not going to be able to breathe the air, we can hardly breathe it now.”

Formosa was charged with violating the Clean Water Act by dumping plastic pellets in a bay close to the Gulf of Mexico and called a serial offender by it’s ruling judge in 2019, according to the Associated Press.

In an interview, St. James Parish President Pete Dufresne said that the Sunshine Project “would provide a vital economic stream” that would further fund the parish’s essential services.

“Without industry, which accounts for a large portion of our annual budget revenues, most of these services would not be possible,” Dufresne said.

The 85-mile stretch between New Orleans and Baton Rouge, known as “Cancer Alley” has more than 150 chemical plants and oil refineries and is continuing to grow. A 2019 joint analysis by The Times-Picayune and ProPublica found that toxic air pollution in this area has been increasing and that “air quality relative to its peers” has been getting worse.

The Sunshine Project has been identified as potentially being one of the top five emitters of Ethylene Oxide, a chemical that the Environmental Protection Agency has linked to an increased risk of lymphoid and breast cancer to those that are exposed, in the United States, according to a report from Loyola’s Jesuit Social Research Institute.

“We’re talking about an industry that we invite into Louisiana which pumps chemicals into our water and into our air which are bad for pregnant mothers and unborn children,” Kellerman said in an interview.

Exposure to Ethylene Oxide has been correlated with an increase in preterm births and miscarriages in pregnant women, according to the report. Additionally, the report said the Sunshine Project is expected to release 339.81 tons of particulate matter, atmospheric aerosol particles that have been linked to a rise in preterm births, stillbirths and low birth weight.

Janile Parks, director of community and government relations for Formosa Plastics, also known as FG, said that “protecting health, safety and the environment has been a priority.”

“At FG, safety is our culture,” Parks said. “FG has relied on sound science in design of The Sunshine Project and is confident it meets all regulatory criteria.”

Dufresne said that St. James Parish officials and Formosa have agreed to adding additional safety measures such as a fence line air monitoring system that would locate air pollution leaks in their facilities.

“I know our residents in the fifth and sixth district are concerned, Dufresne said. “However, I believe in Formosa’s commitment to the community and safety.”

Parks said that the project has undergone a rigorous environmental and operating permit process and they were granted all of their permits. Additionally, Parks said that they plan to maximize reduction of emissions through high efficiency emission control equipment

The Sunshine Project’s location was selected “due to its remoteness from all residents” and because it is an area that has been designated for industrial use, according to Parks.

But many activists against The Sunshine Project, including Kellerman, have decried the plant’s proximity to residential areas in St. James parish Parish.

In 2014, the St. James Parish Council created a zoning plan that would transform the Fourth and Fifth districts, which have predominantly Black residents, into a residential/future industrial area, according to the Louisiana Weekly.

St. James resident and activist in RISE St. James Chasity White cited Formosa’s building site, which is a mile away from a predominantly Black elementary school in the Fifth district, as an example of environmental racism.

“Majority of where they are trying to put the chemical plants is in a Black neighborhood,” White said.

To many residents, including White, Formosa’s site also holds cultural and ancestral significance that dates back to the Antebellum period.

“Where they are planning on building, that is called Buena Vista Winchester Plantation, so my family, they didn’t own the plantation but were slaves here,” White said.

According to Lavigne, what remains are the graves of many St. James residents’ ancestors which have now been fenced off by Formosa.

“They are graves of our ancestors,” Lavigne said. “And we are trying to save those graves.”

While residents have still been barred from visiting the grave sites, White said they have gathered outside of the fencing for events such as a Black history month celebration.

Activists’ efforts against the Sunshine Project have recently garnered the support of the United Nations, with human rights experts declaring the development of petrochemical industries as a form of environmental racism and calling on the United States government to deliver environmental justice in St. James Parish. This comes after Loyola College of Law’s Human Rights Advocacy Project, under the direction of former professor Jeanne Woods, sent a letter to the U.N. seeking its intervention due to “escalating industrialization” in Cancer Alley.

Cristine Farah, Loyola College of Law student and co-editor of the letter, said that she considers the U.N. response a success.

“It serves to put Cancer Alley on the international map for environmental and human rights violations,” Farah said. “Shedding light on the issues that the residents of Cancer Alley face is likely to put pressure on the federal government to envision a change in the petrochemical industry.”

Construction on the Sunshine Project has been setback after it’s permit was temporarily suspended by The U.S. Army Corps of Engineers in November of last year for re-evaluation.

According to Parks, the Corps said in a court filing that a review of alternatives analysis, an examination of a projects’ aquatically environmentally conscious alternatives to examine the practicality of issuing a permit, is required in line with the Corps’ regulations under the Clean Water Act.

Rene Poche, public affairs specialist for the Corps said that the permit will remain in suspended status until the “review is complete and a decision is made.”

Both Lavigne and White consider the temporary suspension of Formosa’s permit a success.

White said the permit’s suspension comes from the pressure and activism of RISE St. James.

Recently, the group has been focused on sending letters to parish officials as well as a comment campaign asking the Corps to revoke Formosa’s permit. The campaign has received more than 40,000 responses.

Despite minor construction already happening on Formosa’s site, White said that she believes RISE St. James will be victorious.

“I just know we are going to stop them, they are really threatened by RISE St. James,” White said.

Lavigne said if Formosa receives its permit, RISE St. James will not allow them to construct.