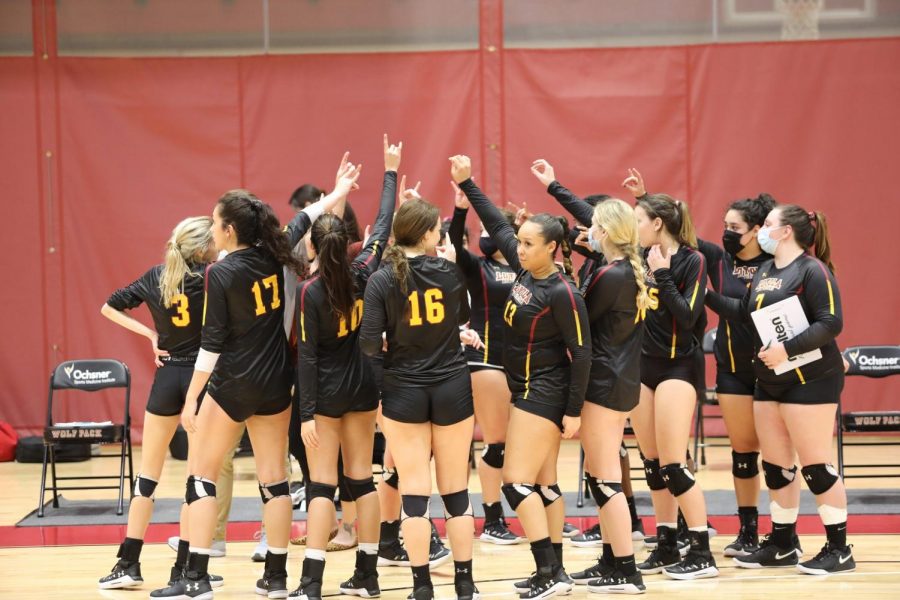 The Loyola volleyball team makes the Wolf Pack hand symbol while breaking a huddle during a victory against Brewton-Parker on March 13. Photo credit: Hannah Renton

In spite of all the uncertainty, fear and upheaval that has dominated the college sports landscape for the last 12 months, this has been nothing short of a phenomenal year for Wolf Pack Athletics and the student-athletes.

Last summer, as I watched big schools with big endowments such as the University of Cincinnati and Stanford University decide to discontinue some of their varsity sports programs in the face of pandemic-related financial troubles, I remember getting really stressed thinking about what the future would hold for Loyola’s 16 varsity sports teams.

A year into the pandemic, I can see that not only have all of Loyola’s teams survived, they’ve thrived in a way that is pretty unique in Loyola’s history. Thirty years removed from reinstating varsity athletics, Loyola is nationally competitive in almost every sport.

Loyola’s competitive dance team earned a spot among the eight best NAIA dance teams in the country when they represented Loyola at nationals earlier this month. One year ago, the outbreak of COVID-19 forced the dance team to return to New Orleans midway through their trip to the 2020 National Championships.

The Loyola women’s golf team is ranked 12th in the NAIA and they’ve placed in the top four of every tournament they’ve competed in except for the Allstate Sugar Bowl Intercollegiate in which they went up against a field of NCAA Division 1 opponents. The women’s tennis team is currently ranked 21st in the nation by the NAIA. Both Loyola swim teams were having strong seasons before the NAIA National Swim Championships were canceled after the host site pulled out amid COVID-19 concerns.

The baseball team is 17-8 and on a seven-game winning streak, they’ve pulled off upsets against multiple highly ranked teams and they’ve started off 3-0 in one of the toughest conferences in NAIA baseball. The volleyball team has also gotten off to a hot start in conference play, through 14 games the Wolf Pack are 9-5 and 7-1 in the SSAC.

None of this has been easy for Loyola’s student-athletes. Each team has faced its own unique challenges because of the pandemic and some teams have even had to undergo midseason quarantines. Loyola student-athletes are also expected to perform at a very high level academically and just being a college student right now can feel daunting enough on its own.

I think a lot of the success that Wolf Pack Athletics has had this year can be attributed to the genuine sense of community that student-athletes build for themselves at Loyola. At a school where the general student body isn’t very “rah-rah” about varsity sports, the friendships and support systems that athletes find among their teammates, fellow student-athletes and coaches are all the more important.

At the beginning of the school year, I reported on a group of student-athletes who were not being given adequate food and water while quarantining in a campus residence hall. Those students were hungry, thirsty and isolated, and they felt seriously hurt and disrespected by how their university was treating them.

Through all of that however, each of them told me that they never doubted for a second that their coach and their team had their back.

An overwhelming number of student-athletes tell The Maroon that they are grateful to be where they are, whether they’re winning games, dealing with injuries or their careers have just been cut short by a global pandemic. I think that speaks highly of the culture of Loyola’s athletic department.

Loyola is still waiting for their first national championship since 1945 but I have a feeling that they won’t have to wait much longer. Many of the Wolf Pack’s brightest stars will be back on campus next semester. In the meantime, Loyola’s student-athletes deserve all our respect and admiration for how they’ve overcome adversity these last 12 months.