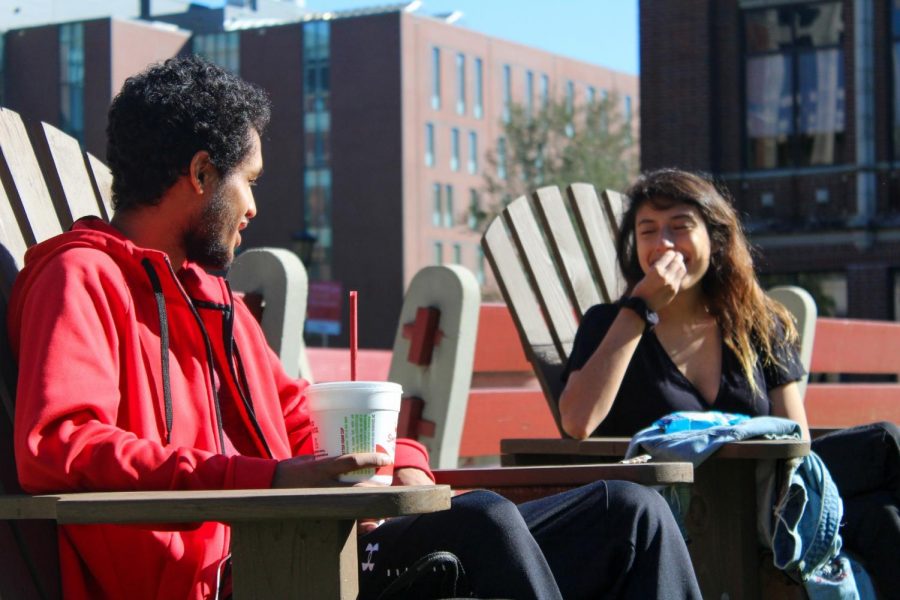 Gabriela López Rúiz and Blake Ernest chat in the grass outside the Danna Center, Thursday, Mar. 18. López Rúiz and Ernest were reunited in August 2020 after being separated for six months because of the pandemic. Photo credit: Madeline Taliancich

Gabriela López Rúiz and Blake Ernest had only been dating for a few months when they started talking about visiting each other during the summer. López Rúiz might take a trip down to Atlanta or Ernest would fly up to New York to see her. Maybe the two would take a trip together from one of their hometowns to the other and see the sights in between.

The couple hadn’t nailed down any official plans for their summer trip when Loyola’s campus shut down in March 2020, forcing them to go their separate ways. Suddenly, the two were a thousand miles away from each other and the possibility of a trip to one city or the other was impossible thanks to new restrictions on flights.

“We had no idea when we’d see each other again,” López Rúiz, a theatre arts junior said.

With COVID cases spiking in the New Orleans area throughout the spring and summer of 2020, the two were unsure if campus would even open again in the fall.

“It sucked at first,” Ernest, a management senior said. “We were seeing each other every day before it happened.”

The experience was especially hard in the beginning because the two had only been dating for five months when they had to go long-distance. Despite struggles early on, López Rúiz said the distance forced them to talk about things they might not have talked about otherwise.

“It definitely made our relationship stronger,” López Rúiz said.

“We started communicating better,” Ernest said. “It gave new life to the relationship.”

“If you really like someone, you definitely have the space to be in a relationship since there aren’t as many distractions,” she said. “If you’re ambivalent about the relationship, it showed the cracks.”

Once Loyola announced that campus would be open again in the fall, López Rúiz and Ernest said they couldn’t wait to see each other again.

“I was counting down the days,” said López Rúiz. “Getting to come back in August after six months really built the excitement.”

Although López Rúiz and Ernest were reunited in August, other Loyola couples haven’t been as lucky.

Cy Jones and John Lenyk also went their separate ways in March 2020, but Lenyk has yet to return to campus and is taking the year off due to the pandemic.

The two have been dating long-distance for a year with seemingly no end to the distance in sight, as Lenyk said he has no clue when he’ll be returning to Loyola’s campus.

“We’ve definitely had our ups and downs throughout the past year with being long-distance, but I’d rather go through that than not have John in my life,” Jones, a music industry, business sophomore said.

To combat the distance, the two said they FaceTime daily, text often and watch Netflix and Hulu together. This is exactly what Sonnenberg suggested couples do to maintain long-distance relationships.

“The key to making long-distance relationships sustainable is to make them a priority,” she said.

Psychoanalyst and founding member of the Irrelationship Group, LLC, Dr. Mark Borg said even without the added pressures of the pandemic, dating during college is already difficult.

“While it’s hard, there’s incredible optimism,” he said. “These relationships are being grown in incredibly fertile soil.”

This much is true for Jones and Lenyk. Despite all the changes long-distance brings, “it’s been 1000% worth it in the long run,” Lenyk said.