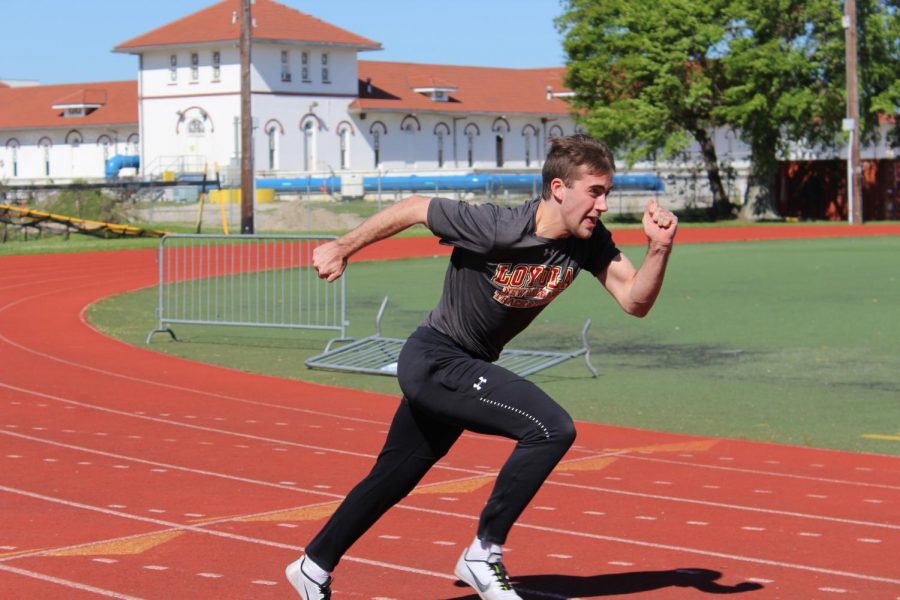 Braddock Lord begins his sprint on the track at Harell Park April 2. As a member of Loyola's track & field team, Lord had to adjust to a new conference and a new season of competition due to COVID-19. Photo credit: Shadera Moore

“Normally we would run our entire cross country season in the fall semester and then going into Christmas break we have that time to train and start preparing for track but this year we are actually running our cross country meets this weekend” said long-distance runner Hayden Ricca.

Ricca hasn’t let the schedule changes slow him down, at the William Carey Indoor Final Qualifier, Ricca dominated the long-distance events, winning the 800 meter with a time of 2:02.09, a new Loyola record, and taking first place in the mile after posting a time of 4:33.15.

“It is just frustrating with COVID. Having to have meets canceled and then obviously joining this new conference and traveling much further than usual”, said Ricca.

Although this season has been an unusual adjustment, this has not prevented Loyola’s track and cross-country team from achieving great things.

“I think (this season) has been going really well so far. For cross-country on the men’s side, I think we are undefeated so far,” said Ricca. “We have a good group of guys. I feel like (they) are building their own identity and starting to become a much closer-knit team”

The track & field and cross country teams had their first meet in
February and have more meets coming up throughout April into late May.

“With the schedule so out of wack due to the pandemic, it is still a fairly young season for track,” said Geoffrey Masanet, head track & field and cross country coach.

Up until this point, the track & field and cross country seasons have been relatively slow-moving regarding meets and competitions, but that is all about to change according to Masanet.

“Now, we have got to meet virtually every week and starting next week we have five meets in a row starting from April 3 all the way through the early part of May,” says Masanet.

Masanet’s main goals are to build a strong team and to develop the talented athletes that he works with every day.

“With any program, you are trying to help your individual kids do their best and improve so wherever their starting point is. However fast they have run in the past, however far they have thrown in the past or however high or long they have jumped, we hope that they make improvements and jump further, throw further and run faster,” said Masanet.

Beyond helping his athletes improve, Masanet also expressed a desire to see his athletes perform well overall in competitions.

“We hope at our conference meet that we have a bunch of kids that are all-conference and they place in the top eight and we also hope to get some kids to nationals,” said Masanet. “These goals are all kind of interwoven. If the kids improve and if they do better than they have in the past then that is success and we hope to see it carry over to some accolades at our conference meet and at the National meet.”