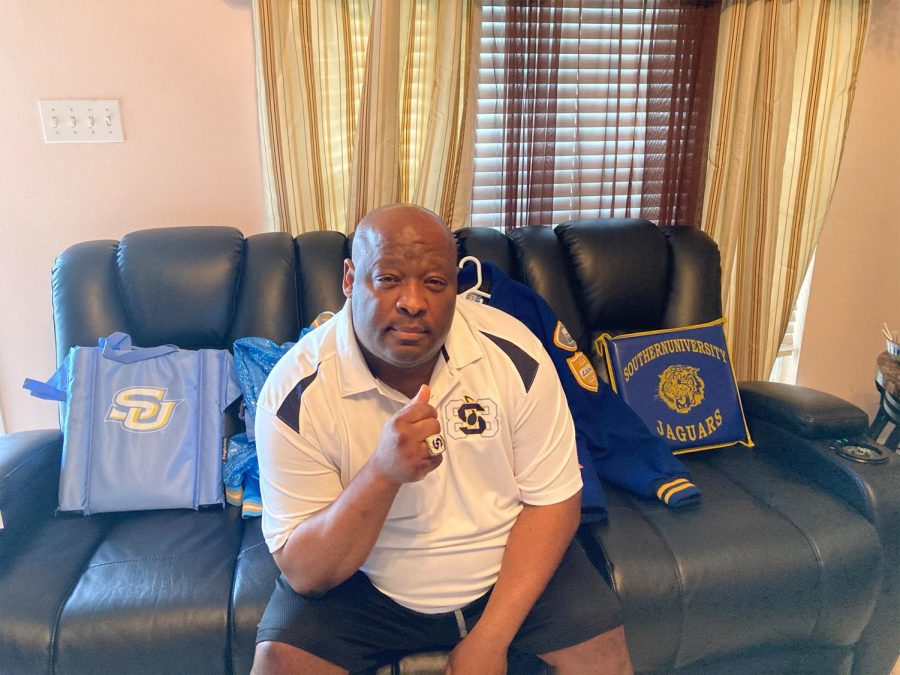 Marvin Williams, a former member of the Southern University marching band surrounds himself with memories of his time in the Human Jukebox. Williams is one alumnus who will not be attending this year's Bayou Classic because of the game moving to Shreveport. Photo credit: Deja Magee

For the first time since 1974, the Bayou Classic football game will not be played in New Orleans.

As a result of COVID-19 safety protocols, the Southern University Jaguars and the Grambling State Tigers will face off at Independence Stadium in Shreveport instead of the Super Dome.

The two schools first played each other in football in 1932 and the Bayou Classic has come to be known as the best annual rivalry game in HBCU football history, leaving some alums frustrated with the location change and wondering how this year’s event will turn out.

Southern alum Marvin Williams said he would not be attending this year’s game as a result of the location change.

“There’s nothing like New Orleans,” said Williams. “Where will we go out to eat or party after the game if we’re not in the city?”

“August 6, 1988, was the beginning of my crab year,” Said Williams. “That’s when the real experience kicked in about being a part of college and becoming a man.”

Williams experienced first-hand the challenges of being a crab and what the Bayou Classic meant to an official band member. The preparation for the battle of the bands and the Bayou Classic football game takes place during the university’s Thanksgiving break.

“We looked forward to Bayou Classic because it was the final stage of initiation,” Williams said. “I wanted all my family and friends to see me marching with the Human Jukebox.”

The first event of the Bayou Classic is the battle of the bands. The bands compete against each other, performing their most popular songs and choreography. The second day is the football game and when the clock strikes zero, crabs become official band members.

“The anticipation leading up to performing for the Bayou Classic was a dream come true,” Williams said. “The ride there would feel like forever because we were so fired up and couldn’t wait.”

The Bayou Classic is not just a regular game for Williams. His participation and love for the band keep him involved with the organization and his crab brothers and sisters.

“As a band member, attending the game was about the band,” Williams said. “But now, as an adult, it’s more about the game.”

Due to several outbreaks of COVID-19 within the Tigers’ football program, Grambling State canceled their games against Alabama A&M and Texas Southern which were scheduled to be played on March 27 and April 3 respectively. However, the 47th annual Bayou Classic will go ahead as planned and be played in Shreveport at Independence Stadium on April 17.