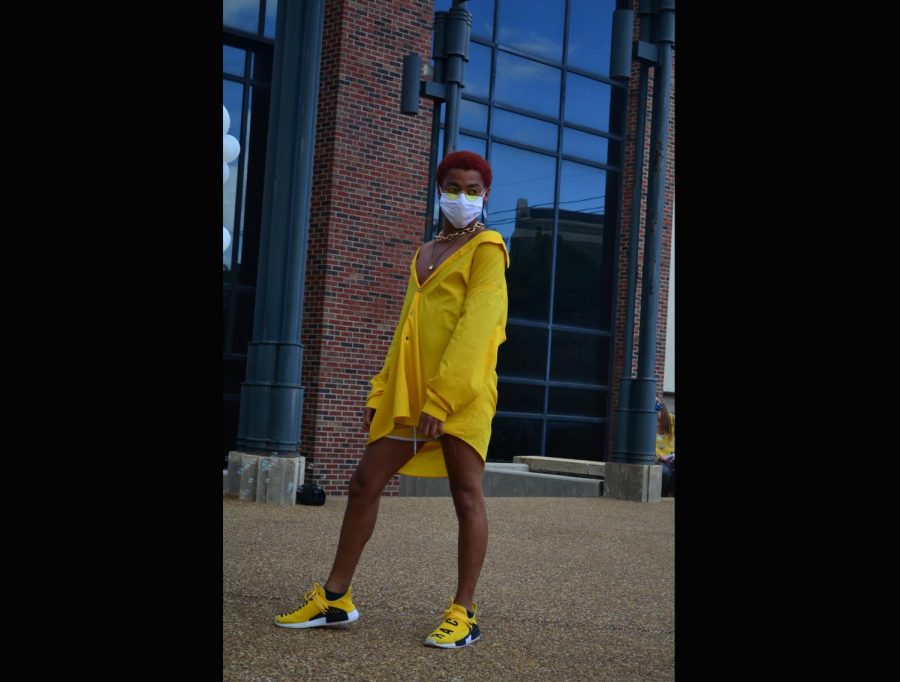 Loyola a la Mode is a student organization founded with the intention to fill a niche that the school had no outlet for before — fashion.

Zyon Barbosa, president of Loyola A La Mode and psychology senior, said she helped co-found the organization her sophomore year after noticing a gap in the arts scene at Loyola.

“I am one of the three founders of the club, actually. Destiny Martin, Praise Tillman, and myself created the club because it is a liberal arts school with so many outlets for people to be themselves, so why not a fashion club?” said Barbosa.

Praise Tillman, music industries senior, said the club aims to promote body positivity by being open to people of all different shapes and sizes.

“We started Loyola a la Mode because we felt like we needed a place on campus where one, you can be fashionable, but also you can be body positive. There wasn’t a lot of body positivity on Loyola’s campus at that time, and there just wasn’t a real place where you could be creative and really like get into fashion if you were into it,” Tillman explained.

The organization the last couple years has been host to an annual fashion show and hopes to continue the yearly event.

Loyola a la Mode has used their Instagram page to showcase students’ outfits. Students would send in their favorite outfits or trends for the week they felt should be shared and showcased on the account.

The selection of Lolah Couture, a student-owned fashion label by senior Biology student Tomi Lolah, made this year’s featured designer at the fashion show an actual Loyola student. Last year’s showcase was an unaffiliated designer not with the school.

“We need to outsource, we need to get local talent, last year we didn’t get to use a student for our guest designer, so I was excited that Tomi is a Loyola student, and we were supporting a Loyola brand,” Tillman said.

“Tomi’s line is beautiful and super colorful which fit our theme perfectly, so it was just great timing,” Barbosa said.

The return of Loyola’s Homecoming last year could start a new Homecoming tradition. Students participated in both fashion shows organized by Loyola A La Mode in 2020 and 2021.

This year, the main theme for the show was “Kaleidoscope,” where they focused more on patterns and monochromatic looks based around primary colors. Last year’s theme was “Retrospect,” where the organization took you through the decades of fashion from the ’70s, ’80s, and all the way to the present.

According to Barbosa, this year’s theme Kaleidoscope was pitched by Director of Programming Mauricia McKinney.

“She’s brilliant and super creative”, Barbosa said. “A kaleidoscope is a constant changing pattern or sequence of objects and elements, so Mauricia thought it would be perfect to showcase the primary colors in monochromatic looks. I loved the idea when she told me and so did everyone else,” said Barbosa.

“The fashion show seems to give everyone a chance to just enjoy themselves. So I would hope it just becomes an annual homecoming event or just in general” said Barbosa. “Everything turned out better than we expected, and it was a great experience.”

Tillman further explained that Kaleidoscope wasn’t solely about the visual element, but also about the current state of how things are.

“Kaleidoscopes, they change, they reflect, they move and they change with the time, and we thought it would really go great with the time and the social climate where your just like ‘Ok! things are changing things are moving, colors are shifting but we’re still here.’ So we were just trying to think of something positive that we could kind of play around with,” Tillman said.

The organization hopes to continue this yearly pace of hosting fashion shows as an event for the school, to give students the chance to “dress up and step out of the normal, stressful student role.”