Column: I was proud to be your editor-in-chief 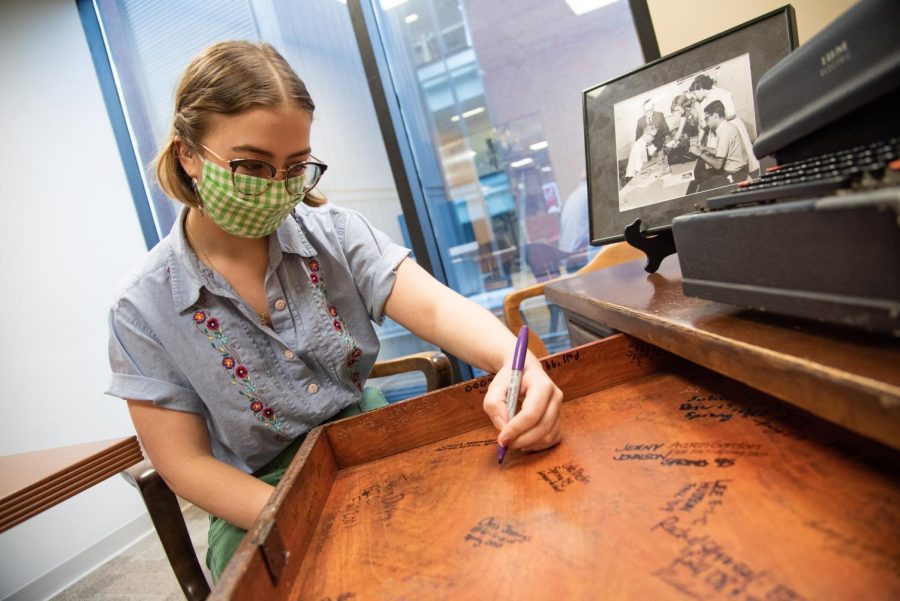 Mass communication senior Rose Wagner signs a desk in the offices of The Maroon. As outgoing editor-in-chief, Wagner joined previous editors-in-chief in signing the desk at the end of her time leading the newsroom.

I went through dozens of attempts trying to start this piece. I tried an anecdote on how I spent my first semester at Loyola reporting for The Maroon, but unaware of where the office was. That version felt contrived, rehearsed.

I tried starting with a classic, “Dear Kiddos,” but that one felt condescending and outdated; you all have taught me more this year than I could ever teach you.

I tried a joke about having led this newsroom for a full year but still struggling to construct a lede; I envisioned a classic Ms. Carballo eye roll.

While I have spent all year knowing this moment would come, I still bawled my eyes out when I saw a new name laid out in carefully placed acrylic letters below mine on The Maroon’s wall of editors-in-chief. I didn’t cry because I thought the newsroom would burst into flames without me, I cried because I knew it wouldn’t. You all are ready to run this place without me. And I, despite how many times I’ve played “circle the drain,” these last few weeks, am ready to leave, but not without getting a little bit emo about it first.

The Maroon has defined my college experience. Correction— The Maroon has been my college experience. I will never forget press nights in the office, except for maybe the ones that turned into Wine Wednesdays. I will never forget the confusion in the Dragon King worker’s voice when I ordered chicken broth and a side of rice for Cristo, or the confusion on your faces when I attempted to draw layout ideas on the office whiteboard. I will never forget this year, the stories we wrote, the grit you all showed, the look on Gaby’s face when she won editor-in-chief (probably because it is permanently archived on Twitter— you’re welcome, Gaby).

I think the important part is to not let the mistakes you make, as a leader, or a coworker, or a friend, in this newsroom, keep you from getting up the next day and trying again. There were countless times this last year when I thought I had failed. Failed this newsroom. Failed myself. Failed all of you.

Yet, I made it to the end, to my last night in the office, proofreading stories while watching the sun set on Calhoun Street.

You will keep reporting, photographing, chronicling life at Loyola. You will succeed, win awards, gain a better understanding of this place we all call home for four years. You will falter, have to print corrections, work on stories that never get published, designs that don’t quite land with your audience.

Most of all, you will endure, you will grow and you too will one day be the sappy senior writing past the word limit you told your Op/Ed editor all semester to enforce on writers (sorry, Daniel). I will spend the rest of my time in journalism trying to make y’all proud. All that I ask is that you keep showing up, keep trying, keep asking for help and keep pushing for a greater Loyola, for a greater Maroon.