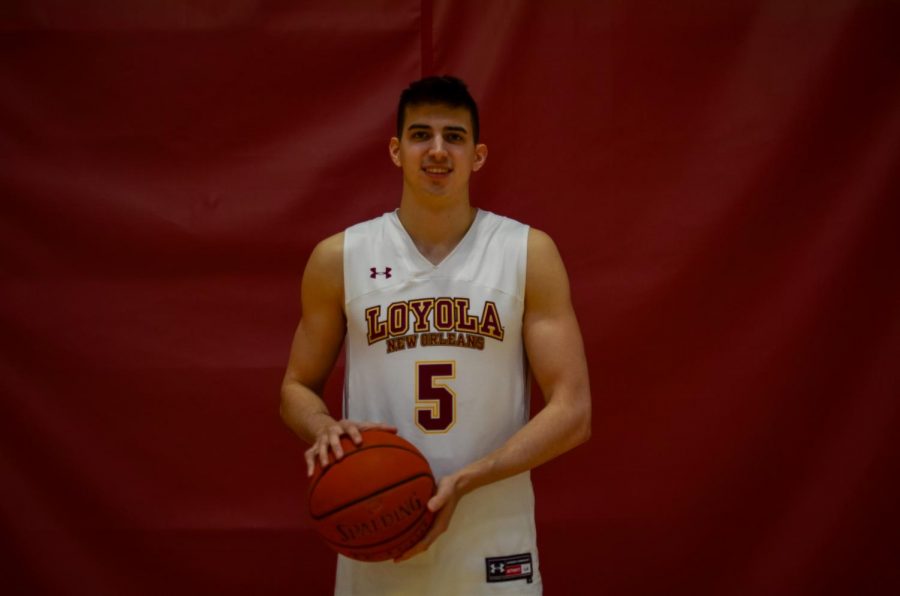 Zach Muller, Business major and sophomore at Loyola, plays point guard for Loyola's Men's Basketball team. Muller will be a crucial asset on the court in the team's 2021-2022 season. Photo credit: Gabrielle Korein

As the 2020-2021 NAIA Basketball season comes to a close, a new chapter begins for the Loyola men’s basketball team. After falling in overtime to the eventual national runner-up Lewis-Clark State in the NAIA Quarterfinals, the Wolf Pack is focused on moving full steam ahead into the next season.

Helping lead the team will be point guard Zach Muller, who believes the team has the chance to make Loyola history next year by bringing an NAIA Basketball championship to St. Charles Avenue for the first time since 1945. Muller was the only underclassmen to start for the Wolf Pack during the team’s tournament run.

Muller’s story starts in Dallas, Texas, where he was raised by his father and played basketball at Bishop Lynch High School. His high school program was very competitive, leaving Muller on the bench until his senior season. After earning an athletic scholarship to Loyola, Muller had to learn a new position halfway through his sophomore season.

“I never really played point guard, and about halfway through the season, coach looked at me and thought of me as a guy who could really get the ball moving,” said Muller. “We have scorers all around the team so we didn’t need a guy to go out there and shoot 20 times a game.”

Leading up to the tournament, Loyola had to travel to SSAC rival Stillman for a game between two of the conference’s most talented teams. Despite the loss, Muller points to this game as a turning point for the team.

“We really came together as a group,” Muller said. “We took that momentum into the tournament.”

Entering the NAIA tournament as an 11 seed, Muller said the team knew they’d have a difficult road ahead of them.

“Coach told us we have the hardest road”, Muller said. “But in the NAIA Tournament, anybody can beat anybody.”

The Wolf Pack swept through their regional games in Alexandria La., which was part of a new Covid-safe approach to the NAIA tournament. Traditionally all tournament games would’ve been held in Kansas City. Muller described the experience as both incredible and difficult, given the new setup.

No. 6 seeded Marian University in the round of 16 looked to be a tough matchup, but Loyola earned a 69-62 victory, advancing to the Quarterfinals where they would face No. 3 seeded Lewis-Clark State. The game resulted in an overtime loss for the Wolf Pack, but Muller says the team can build on this.

“We’re not far off, and winning a national championship is very realistic,” he said. “We still got to put the pieces together, but we have high expectations for this next season.”

Taking the next step from making the tournament to winning it will take a lot of hard work and practice, but Muller believes it is all within reach. Muller said that the team’s goals for next year are to go undefeated, to get the No. 1 seed in the SSAC conference tournament and to then win the SSAC tournament championship. For himself, he said he wants to work on eliminating turnovers. As a team, Muller said he wants the Wolf Pack to get better every game and keep moving forward.

“Coach has been preaching that for the past two years, we have the talent, we just gotta do the little things,” he said. “It’s the little things that separate the great teams from the good teams.”