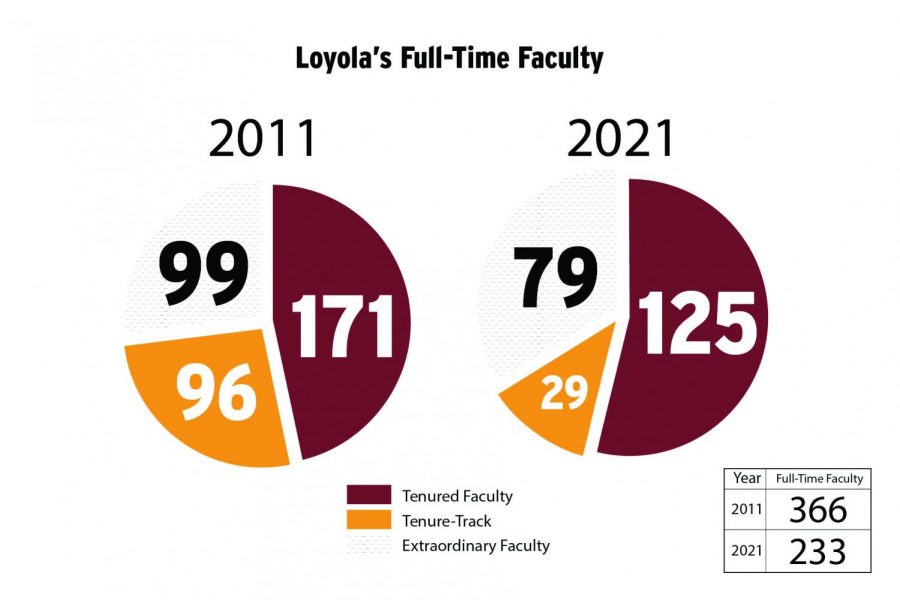 Tenure is often an inaccessible dream for many professors at Loyola where the majority of faculty are not on the tenure-track.

Over the past decade, Loyola has increasingly hired professors who have no shot at tenure, an academic appointment that gives faculty a nearly indefinite contract. Those who are lucky enough to have a chance at tenure, and thus, enhanced job security, are predominantly White men.

In 2011, Loyola had 171 tenured and 96 tenure-track faculty, making up nearly three-fourths of the university’s full-time faculty at the time, according to Loyola’s Office of Institutional Research and Effectiveness.

Now, 10 years later, there are 125 tenured and 29 tenure-track faculty at the university, making up two-thirds of the university’s full-time faculty, according to Tanuja Singh, provost and senior vice president of academic affairs.

“The reality for the university is that it has to balance a tenure position versus its priorities but also its financial situation at any given time,” Singh said.

Singh said future hiring decisions are driven by taking the university’s education needs into consideration. She said she feels that students can be well served by both tenured faculty as well as extraordinary faculty — those who aren’t eligible for tenure.

“We believe that a combination of experiences makes for a better education,” Singh said.

For example, in many fields, a faculty member who has expertise in their field but doesn’t necessarily have a terminal degree, or the highest degrees available in any discipline, will bring a perspective into the classroom that compliments the more research-based tenure-track faculty.

“Our internal analysis clearly showed that there is no correlation between the type of appointment a faculty has, with student satisfaction with quality of teaching,” Singh said, “We will always look at a best practice approach towards hiring, which includes hiring faculty with different talents, and that means hiring ordinary, extraordinary, and adjunct faculty.”

Patricia Matthews, author of “Written/Unwritten: Diversity and the Hidden Truths of Tenure” and a tenured professor at Montclair State University, said institutions such as Loyola are exploiting professors by hiring them without the possibility of achieving tenure.

“There are so many qualified PhDs, they can actually afford to get brilliant dedicated teachers, without paying them what they’re worth, and without the promise of tenure,” said Matthews, “The reason that’s a problem is because it means that they’re always at the mercy of shifting institutional politics of whether or not students like them.”

The Importance of Tenure

Extraordinary faculty work on one-year contracts, according to Nick Volz, chair of the College Rank and Tenure Committee for the College of Music and Media. Matthews said these one-year contracts limit faculty’s ability to explore unconventional topics and push back against administrative decisions out of fear of losing their jobs.

“If you have a strong tenured faculty, they can push back when the institutional leadership is making problematic, or immoral choices,” Matthews said, “If all of your faculty can be hired and fired without cause, you can just not renew their contract at the end of the year for no reason. It concentrates power in the hands of administrators who increasingly are worried about the bottom line.”

According to the American Association of University Professors, the use of non-tenure-track hires should be limited to specialized fields and emergency situations.

Jonathan Peterson, vice-chair of the University Senate, said that weakening tenure at the university is dangerous.

“In an increasingly polarized political environment there will be powerful voices against faculty whose work and teaching represents a threat to the interests of donors or legislators or even just local special interest groups,” Peterson said.

According to Peterson, the decline in tenured professors is affecting faculty morale.

“My sense, as somebody involved with the Senate, is that there is a perception that tenure positions are playing a declining role in the faculty, and that we are evolving towards a world in which fewer faculty members have the protection of tenure,” Peterson said.

“You really have the trust that Loyola is behind me, and I can do research that might be, you know, risky, or provocative or intellectually pushing the envelope, and I can do that knowing that I have the confidence of the university behind me, and that’s huge,” Christopher Schaberg, a tenured English professor, said.

Peterson said a lack of tenured faculty could also affect the quality of students’ education.

“A world in which faculty members don’t have that protection to work on topics that are considered to be dangerous or unpopular, is a world in which students are deprived of the ability to study and research those issues too,” Peterson said, “And that means that students will not have the same opportunity to become future leaders on those issues.”

On top of offers of tenure diminishing at Loyola, the professors who have traditionally been granted tenure are predominantly White male professors.

These tenure numbers are disproportionate compared to the demographic makeup of the faculty.

In fall 2019, 17% of full-time faculty were professors of color and 46% were female, according to the Office of Institutional Research and Effectiveness.

Matthews said that tenured faculty at any given university should reflect the institution’s student population.

“If (faculty of color) are doing 100% of the heavy lifting in supporting students of color, and their White colleagues are just skating along, that might even be a bigger problem,” Matthews said.

In fall of 2019, 41% of students identified as people of color, according to Loyola’s Office of Institutional Research and Effectiveness.

The Process of Tenure

Generally, faculty are hired on the tenure-track and apply for tenure at the end of their fifth year.

The three criteria the university looks at for tenure recommendation are teaching, research and scholarship, and service, according to Volz.

When it comes to teaching, the university looks at student feedback through course evaluations, peer evaluations by fellow faculty and innovations in curriculum, according to Michael Cappella, dean of the College of Business.

In terms of research, the university looks at external research such as journal publications and books. The specificity of research requirements varies by college.

For example, in the College of Business faculty up for tenure must have a minimum of three publications in the last five years, according to Cappella. Another example is in the College of Music and Media, they require scholarship, like performances, in lieu of research due to the nature of the areas faculty specialize in.

Professors on the tenure-track submit evidence of teaching, scholarship and discovery to the College Rank and Tenure Committee for their respective college, and the committee evaluates the materials, according to Singh.

Signh said the committee’s recommendation goes to the dean, and then the provost consults with the president to make a final decision on whether or not to grant tenure.

Despite professors’ concerns, universities across the nation are relying more and more on extraordinary faculty in place of tenure-track faculty, said Matthews.

The recession led to a trend in universities nationwide, in which tenured positions have taken a backseat to full-time extraordinary and part-time faculty presence on campuses.

“It is a national crisis,” said Matthews.