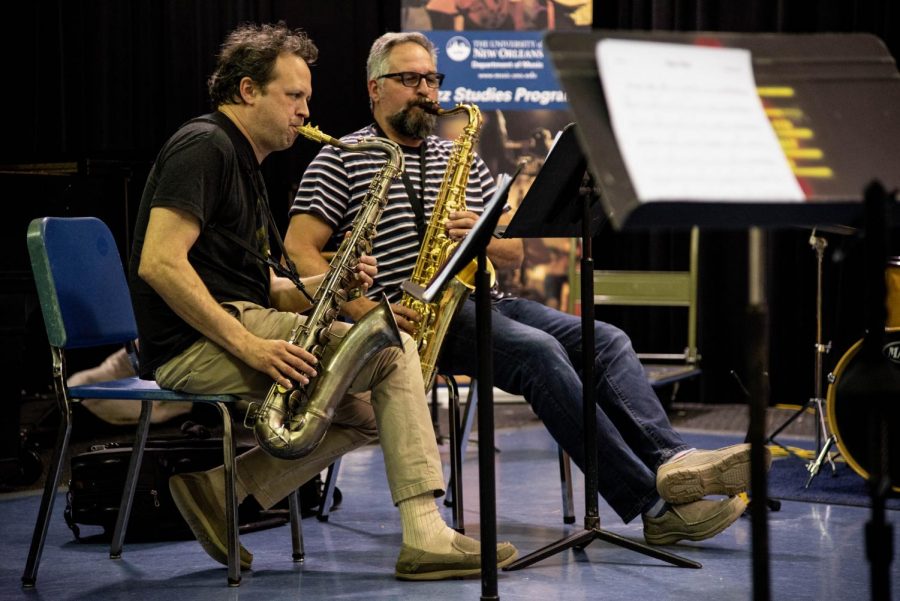 Jason Mingledorff, band member and assistant professor of saxophone studies at Loyola, said the win was

“Winning the Grammy felt great. It was wonderful and kind of hard to believe. The nomination was a surprise, we didn’t know we had it, it wasn’t reviewed,” Mingledorff said.

Iconic to New Orleans, the Nightcrawlers have played Jazzfest for about 20 years. They even appear on a New Orleans episode of The Simpsons.

Their story began twenty-seven years ago at a writer’s workshop. Members would meet every week to play the music they were interested in hearing. Before long, the New Orleans Nightcrawlers became a working band.

Because the album was put out right as COVID-19 hit the U.S., the band was not expecting much hype due to the lack of local coverage on the release.

“No magazine wrote about it, there was a little thing about it coming out in the paper. So when we got nominated, there was no way to believe it. When we won, that was on another level,” Mingledorff said.

Craig Klein, Preservation Hall and New Orleans Nightcrawlers trombonist, said he believes the regional roots category is faithful to the feel and purpose of the brass band’s funk style. The band hopes to stay true to its roots and pay homage to New Orleans brass.

“It’s powerful, this Grammy award. New Orleans gets a lot of attention and is known for music, but to know more about New Orleans brass band culture and music is what we hope this Grammy brings attention to,” Klein said.

Mingledorff recognized New Orleans bands such as The Dirty Dozen, who he called the biggest influence for the Nightcrawlers.

Aaron Levinson, a jazz drummer and fan of the group, said the band has always been a central part of New Orleans music culture and the grammy was a big win for the city.

“This record is amazing, but it’s not like they just became great this year. It really feels like a win for the entire New Orleans music community. Like I said, we’ve always known the Nightcrawlers were great, so it almost feels like a win for all the local giants who, even though they may not have gotten worldwide recognition yet, we all know what they do,” Levinson said, “We know what we’ve got here in the New Orleans, and it feels so good to see the guys get their flowers!”