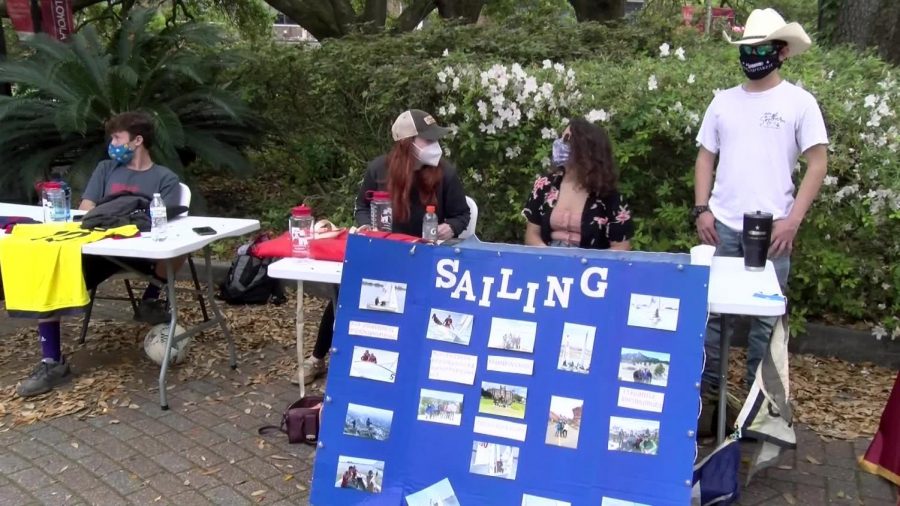 Members of the Loyola sailing club table in front of the Danna Center on March 30, 2021. Club sports teams use tabling to drum up student interest. Photo credit: Jabez Berniard

Club sport student organizers are looking to dust off their equipment and jump back into play as they look for spring recruits.

Loyola currently has nine active club sports including rugby and sailing, both of which have seen a dip in student involvement as a result of the pandemic. Unlike varsity sports, club sports are independently chartered and run by students, meaning their success relies heavily on prospective students seeking them out.

“We need players, we need fans, we need whatever you can give,” said Jared Ladmirault, rugby club president.

Ladmirault said that the current members of the rugby club have not been able to play because they lack the numbers needed for a match. In the upcoming weeks he said the team will continue tabling around campus to raise awareness for the group.

“We’re so thankful to be a part of the Loyola community,” Ladmirault said “If you come out and support us, we support you.”

Sydney Rockwell, vice president of the sailing club, said they are also increasing their efforts to find new members.

“The sailing team has just recently been able to go out and practice and we just finished up our first regatta. We’re looking for new recruits to join us for the rest of the year and next year,” said Rockwell.

Rockwell and Ladmirault both represented their sports by tabling at Rec-ing the Res Quad, an interactive yard game event sponsored by campus recreation. Over the course of the event, they spoke with students sharing their experiences and goals moving forward.

Both organizers said interested students of all experience levels are encouraged to join a club team as it is a great way to learn new skills and maintain an active lifestyle.

“Hopefully you guys will come out,” Ladmirault said. “We go on trips, we play other teams, we win games, and we have a good time.”